Nintendo has just re-launched the old NES game "Mike Tyson's" Punch Out via the virtual console... Well, sort of...

What happened to Iron Mike Tyson?

I have some old memories of this game clouded by the fog of nostalgia.

I remember the day I first beat Glass Joe and King Hippo. I remember the first day I took Little Mac all the way up to Mike Tyson himself, only to be knocked out in record time!

There was one kid in my neighborhood who had every NES game as soon as it was released. He had awesome powers of game playing magic at his disposal. When I was just finding the fifth dungeon in Zelda he was already done beating the second quest. When I was just discovering the location of the minus world in Super Mario Brothers he had already figured out all of the inifinite life tricks and had beaten the game without getting killed once! He was the kind of kid you didn't play games that only switched players when you lost a life with.

He was the one who taught me how to beat Iron Mike in this game... 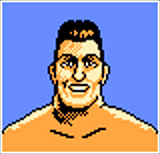 Well, it turns out that Mr. Dream fights exactly as Iron Mike did, he just has a different face. Nintendo had to replace Iron Mike for a very simple reason and it's not because of the trouble he got into with the law! Nope, Mike Tyson's contract with Nintendo expired a long time ago. After Iron Mike lost his title to James "Buster" Douglas Nintendo felt no need to sign him up again.