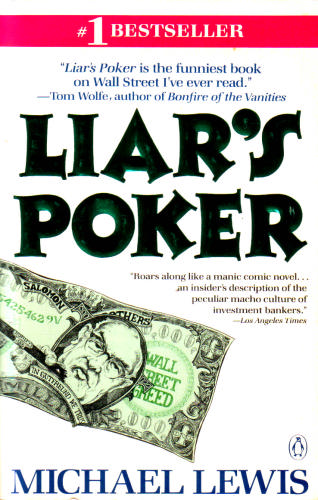 Liar's Poker is a game similar to Liar's Dice where you bid on the serial numbers of dollar bills. This game of push your luck was well known on the trading floor of Solomon Brothers. Only the baddest of the bad played this game for big dollars. It was won by a fair use of trickery, deceit and intimidation. It is this game which is a metaphor for the events that are chronicled in the book.

The book Liar's Dice provides an inside look at what happened inside Solomon Brothers during the early 80's until the author left in 1988. The book is full of true tales from Wall Street with Solomon Brothers in the lead role.

Tales vary from the whimsical where a new trainee was lead to believe the SEC was investigating him for stealing food from the company cafeteria to the gritty cut throat nature of upper management. The traders that worked at Solomon Brothers lived hard and played hard.

What I found most interesting about the book is that as I read the tales of gluttony and greed I began to forget that this book was written about the 1980's and not the post 2000 financial markets. Bizarre mortgage securities that I thought had only been around for a few years have their roots in the mortgage bond trading floor of Solomon Brothers.

The repackaging of mortgages as securities, splitting the principal form the interest and all sorts of other financial shenanigans are discussed in this as they came about. We learn about the traders who created them and why they did so. We also get an inside look at what goes through a traders head when he has near unlimited amounts of money to trade with and very little oversight.

The writing is very engaging and the stories are so unbelievable that you will find yourself unable to put the book down. If you are like me you will finish the book and say to yourself, "How was this allowed to happen again? Did we learn nothing from the 80's?"

What you may also find deeply disturbing is that the man in charge of the money supply back then is also the chairman of the Economic Recovery Advisory Board today under President Obama: Paul Volker.

These changes in policy contributed to the significant recession the U.S. economy experienced in the early 1980s, which included the highest unemployment levels since the Great Depression. These conditions were predictable by Carter when he appointed Volcker, and these circumstances contributed, predictably, to the defeat of Carter. Volcker's Fed also elicited the strongest political attacks and most wide-spread protests in the history of the Federal Reserve (unlike any protests experienced since 1922), due to the effects of the high interest rates on the construction and farming sectors, culminating in indebted farmers driving their tractors onto C Street NW and blockading the Eccles Building.

This book is an amazing read and at only 249 pages it is a short read. If you would like to understand the roots of the current mortgage market and how they became transformed into securities, chopped, sliced and diced that you can't go wrong by reading this book. Solomon Brothers are the ones who owned the mortgage bond market for the first few years that it existed. You could even say that they created it. Read this book and you will know too.