My family and I went to New York City last week and all over town we saw signs for Spike TV. They were advertising the fact that they were showing a bunch of Star Wars movies all month long.

I'm a Star Wars fan myself and one thing that used to bother me was the fact that Vader was Luke's father.

I mean look at Vader in the first movie. He terrifies people! He can strangle people from ten feet away and has such great lines as, "If this is a counselor ship, than where is the ambassador?"

When Vader says that line he chokes a rebel! There was probably a big pile of dead rebels and the bad ass that Vader is was probably just bringing rebels out one at a time so he could do that over and over again!

Luke, on the other hand, is a total wimp. Uncle Owen tells him to go fix some moisture vaporators and what does Luke say? He whines about going to Taschi Station and power converters. Lucky for us we know nothing about Vader being Luke's father at this point.

We only find out about it after he cuts Luke's hand off. 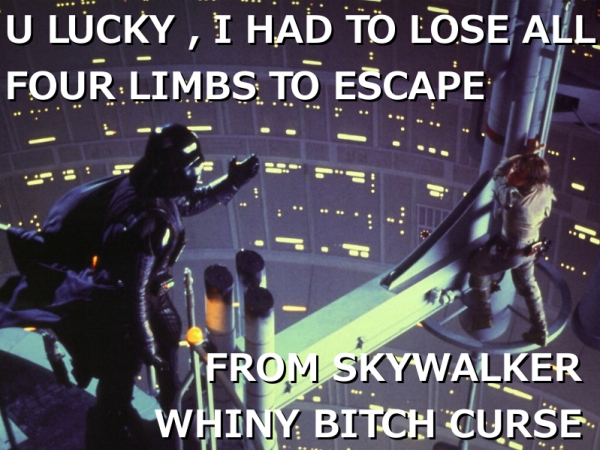 It is only after seeing the horrible acting of that guy who played Anakin in parts 2 and 3 that we fully understand the Skywalker curse. Yes, the curse!

See, Anakin Skywalker was a good kid but when he grew into his teen years he became a very whiney bitch. He also acted like a piece of cardboard with marionette strings tied to his limbs but that is a different curse.

It is not until the second movie, when Anakin loses a hand to Count Douku that the whininess begins to fade.

Too bad for Anakin count Douku cut off the wrong hand because he gets super whiney in the third movie until Obi Wan takes matters into his own hands and cuts Anakin's legs off.

The point I'm trying to make is that we all make sacrifices in life. Some we do willingly while others are thrust upon us.

Lucky for Luke he learned quick and only had to lose one hand to grow a pair and become a man. He was obviously far luckier than his father before him.

Right now I'm working nights and it sucks. I have almost no time with my family during the week but I do have more money. At this stage of my life I would much rather have more time with my family. I'm willing to sacrifice the new car for that. Not my hand though, I'm not that whiney.