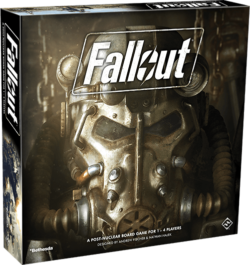 The Fallout board game by Fantasy Flight was released in 2017. I picked up a copy shortly after release and did not like it. It was a game I wanted to like but it was held back by a very clunky victory point system. After a few failed attempts at playing, it ended up stored away in the game closet.

In 2018 Fantasy Flight released an expansion to the base game; Fallout New California. This expansion added a single cooperative scenario and expanded the existing scenarios from the base game. New characters, location tiles, events, and item cards rounded out the expansion. I did not pick up a copy of this right away but instead picked it up on discount.

In 2020 Fantasy Flight released their final expansion to the game; Fallout Atomic Bonds. This expansion added in mutations, some elements of Fallout 76 (camps and workshops), and cooperative variants for every scenario released thus far except for the one added in New California. The agenda driven victory system was tossed out and replaced by goals. Instead of collecting random agenda cards the players would work together to accomplish a set victory condition from the scenario and a number of random goals equivalent to the number of players.

The gameplay is fairly straight forward. Between one and four players select a character and complete a series of quests while exploring a world made up of random tiles. Each scenario has two factions that you can side with; Freedom or Security.

A scenario tracker keeps track of the amount of influence each faction has, when one side reaches the end of the tracker, the game ends. The game also ends if one player accumulates enough influence points via agenda cards. The expansions modify certain aspects of this.

Exploration is fairly simple. You flip over tiles and then move across them. If a settlement or ruins named location is present you can pull from the encounter deck and see what happens. If an enemy icon is present then a single enemy token is spawned on that space.

Enemies respawn when killed in an inactive state on a nearby tile. In this way exploring the map is both good in that more areas open up for questing but it is also bad in that enemy tokens can take over.

At the beginning of the game one main quest card is staged on the board. This sets the overall story for the scenario as well as providing the players with an immediate choice as to which faction they want to support. As this quest is completed more branching quests will be staged to the board. Sometimes a quest also involves adding cards to the encounter decks, which represents the players having to search for things related to the quest.

The game starts with two encounter decks; one for ruins and the other for settlements. Ruin encounters tend to include enemies and loot while settlement encounters focus on story and shopping.

As you complete quests and encounters more encounters will be added to the encounter decks. When adding cards you take the top X (X = number of players) cards from the appropriate encounter deck and shuffle in the new cards. This results in the added events being drawn sooner rather than having to cycle the entire encounter deck.

The combat, tests and challenges in the game all revolve around three dice. these dice show dots and body hit locations. Each dot represents a success on a test and a hit on you in combat. Sometimes an equipped weapon or test will reference one of the S.P.E.C.I.A.L attributes. When you have the matching attribute you may reroll dice once for each matching attribute.

In combat enemy hits always hit you before yours can kill them. Enemy hits are also multiplied by their level so two hits from a level one enemy becomes six damage when the enemy is level six. There are a few other modifiers dealing with combat but that is the gist of it.

Your character will earn experience and find items as the game progresses. You can also gain rads if you stray into an irradiated zone. Radiation and hit points are tracked on the same line with radiation limiting your maximum hit points. If the two tokens ever meet, you die.

When you gain experience you move the marker from left to right, only stopping on S.P.E.C.I.A.L. points you have. Thus you can level up quickly in the early game and slowly in the late game. When you level up you draw two S.P.E.C.I.A.L. tokens at random and pick one. If you already have one or both you can instead pick a perk card with some perk cards being obviously better than others.

There are also three double-sided trait tokens that you can acquire during the game. These tokens are mutually exclusive in that you can only have one side active. For example the synth/super mutant token means you can only be one or the other, never both. Likewise, the well rested/addicted token means being addicted prevents you from ever becoming well rested.

It was with all of these expansions in hand that we sat down to try and play this game. We played three games this past week; once with the base game, once with an expanded scenario from New California, and finally using the enhanced cooperative rules of Atomic Bonds.

We used the Welcome to the Commonwealth scenario from the base game. I played as the Vault Dweller and my wife used the Wastelander. We made a lot of mistakes in this first game, let me list them for you:

This resulted in a very easy game for us. Enemies were not much of a challenge and my wife breezed to an easy victory with a handful of agenda cards. At the end of the game she had a full hand of four agenda cards while I had just acquired my second.

For our next game we prepared by looking over the rules and reading FAQs. We played the Expanded Capital Wasteland scenario.

With the expanded character pool we expected to see the new characters outgun the originals but that was not the case. Aside from the Super Mutant (probably the least useful character) the characters are fairly well balanced. I used the Enclave Outcast and my wife played as the Ghoul.

After the serious drubbing I took in our first game I played heavy on grabbing agenda cards. Every time a quest showed up that granted agenda cards I went for it. My wife played casually, exploring and killing enemies. We only made one major mistake.

Some events have you "Draw and Fight" an enemy. What we did not realize is that these enemies are discarded regardless of how you do in the fight. We soon had a horde of Super Mutants covering the map because I failed to kill them during events.

The corrections from or previous game had a huge impact on this one. We learned that armor is extremely useful and level three enemies are not to be trifled with. Expanding rerolls to the Yahtzee format allowed us to complete more tests and challenges than before. My push to collect agenda cards made for a less than fun game. I ended up winning a lopsided victory due to the imbalance in agenda card counts between us.

Our final game was the one where we incorporated the components from Atomic Bonds. We used the Expanded Welcome to the Commonwealth scenario and all of the Atomic Bonds content. We chose to play on the side of the Railroad. I reprised my role as the Vault Dweller and my wife went with the NCR Ranger.

Playing in true cooperative fashion made the game more enjoyable and her ability to open up the map had a huge impact on the amount of enemies. We tried to find one of the vaults and a few other locations but were unable to.

We deployed a handful of C.A.M.P.s and the fast travel rules associated with them had a large impact on the game. Granted you can't fast travel when enemies are nearby but having a C.A.M.P. on the CIT Ruins made the completion of the game's final event very easy.

However, we didn't end the game by simply completing the final quest, we also needed to complete two of the four available goals. That, took us a lot longer. In fact, we managed to complete our second goal on the same turn that would have resulted in the enemy influence marker reaching the end of the scenario tracker. We only narrowly won the game.

All in all we did find the game enjoyable when playing in a cooperative fashion. I am not sure if I like all the extra stuff added with Atomic Bonds but the system does have a built in timer (enemy influence moves at a set pace) to keep games from lasting too long. The mutations cards (we never activated any) add a nice thematic touch to the radiation system beyond simply limiting your hit points. The C.A.M.P. upgrades didn't have a big impact on our game (they replace agenda card rewards) but the fast travel did.

One problem that is extremely hard to fix is that of the randomness of the item decks. You can go an entire game and never draw a weapon or armor card. Sometimes you do draw one but it is so expensive that you can't collect enough caps to buy it. Because of the difficulty in taking down tough enemies you will need some rerolls or armor to survive.

The base game on its own is still crap. The competitive agenda card based victory system is far too random and when players are supporting opposing factions no one can achieve a victory. In the two games we used the agenda rules we only had around six or seven agenda cards pooled between two players when the game ended. I can not imagine what would happen with four players fighting over the agenda quests.

If you are going to buy this game it would be in your best interest to buy the base game and both expansions. If you can't buy it all at once I would suggest buying Atomic Bonds before New California.

6 thoughts on “What We Are Playing: Fallout”