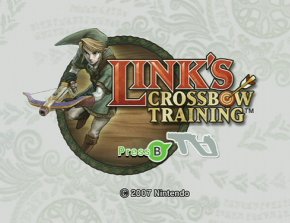 Link returns from The Legend of Zelda: Twilight Princess to pick up the Wii Zapper and take aim at a host of targets in this shooting-gallery-style game.

Using the Wii Zapper: The Wii Zapper requires the Wii Remote and Nunchuk, housing both in a comfortable and intuitive frame. The control stick on the Nunchuk controls player movement (on stages that allow player movement), while simply aiming the Wii Zapper moves the targeting reticule on the screen. Pulling the trigger fires Link's crossbow. By aiming off screen, players can turn Link to face in a new direction (again, on stages that allow this).