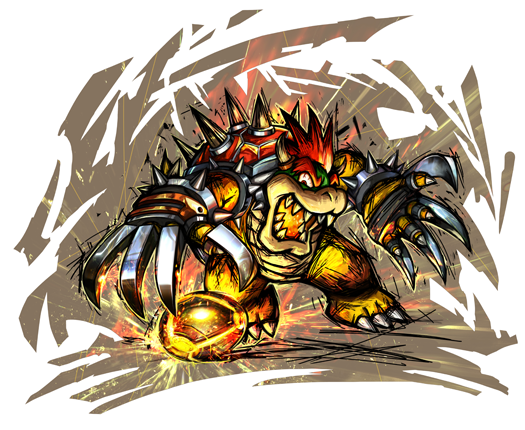 Mario Strikers Charged for the Wii is due to be released in the US on July 30, 2007. This one to four player sports game will be the second American Wi-Fi enabled Wii game to hit the market.

The captains from the original Super Mario Strikers game are back, as well as four new ones. Players can create their own original teams by mixing and matching their captain with a new cast of sidekicks (get it? sidekicks) making each team play differently than the others.

With new captain super-abilities and sidekick skill-shots you can expect a new level of depth to the craziness that is soccer battling in the Mario universe. Couple this with the fields and their own special properties you will have a game that changes every time you play it.

Though this is a Wi-Fi enabled game Nintendo has not left the single player side of the game to languish. There are many new simgle-player modes, from tournaments to challenges to tutorials. Yeah, I know most of you do not consider a tutorial to be much of a single-player mode but those tutorials can be a boon for working on your trick shots.

Multi-player mode is a whole new madness. Up to four players can play locally or they can use the Nintendo Wi-Fi Connection for one-on-one matches. 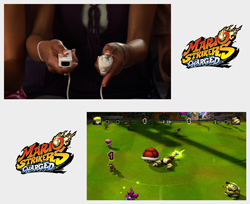 It's not just about soccer battling for battling's sake, there is a story mode in the game. In the tournament mode you can take on the "Road to the Striker Cup" challenge. You can also try to finish 12 of the toughest game situations in Striker Challenges. Both of these modes lead to new stadiums, captains and player cards being unlocked once you beat them. 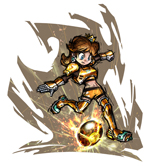 Mario Strikers Charged features 17 total stadiums. Nine of them are new, each with its own terrain and set of perils that affect the game play. New stadiums include the Sand Tomb, Thunder Island, the Vice, the Lava Pit, Galactic Stadium, the Wastelands, Crystal Canyon, Storm Ship Stadium and the Dump. Also included are the classic stadiums updated from Super Mario Strikers and a new Strikers 101 field. 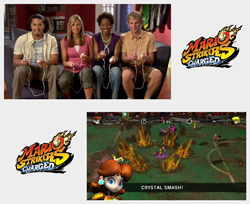 Special powers/weapons/moves/features: Mario Strikers Charged is all about maximizing the abilities of the different characters, as each character has a unique set of abilities and skills, not to mention super-abilities like Donkey Kong"s Thunder Wham or Bowser"s Fire Storm. Charging a ball provides a more powerful shot for both the captain and sidekick characters. A fully charged captain shot will result in a devastating Mega Strike goal shot. A successful Mega Strike can split into six different balls, all of which must be blocked by the defensive players by using the Wii Remote to point at the screen. Practice passing and charging the ball to increase the chance of scoring. The player can charge the ball by completing a series of successful passes and avoiding steals, or by holding the B button to charge the ball quickly. The interactive stadiums, each with its own pitfalls, make each game an exercise in chaos.

Nintendo Wi-Fi Connection Play: Players climb the rankings boards as they compete on Nintendo Wi-Fi Connection specific to the region they are playing in. They earn ranking points by scoring goals, posting game wins and even just competing. Players can earn up to 20 points total: 10 points for a win, 1 point for a loss and 1 point per goal, to a maximum of 10 points. With a positive structured rankings system, players are rewarded for playing games in their entirety, creating better online experiences for all participants. The ultimate reward is watching a player"s rank climb the leader board. Players are matched up with opponents of similar skill levels through a rankings-based matchmaking system. The player who has earned the most points for that day will be rewarded the title of Striker of the Day. To keep the ranking system honest, players earn points only when competing in ranked games, not when playing against friends. 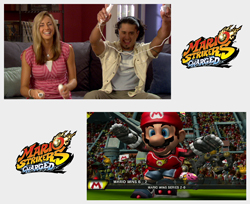 Community: Mario Strikers Charged will offer a strong sense of Wii community, as players will be able to create Mario Strikers Charged profiles using Mii characters for their online identity and create Friend Roster to manage their social community. Using their Mii profiles, players can track their progress on the ranking leader board and their performance against their friends specifically. The goal is to build a community that is accessible and friendly to new players, yet also rewarding for more advanced players.