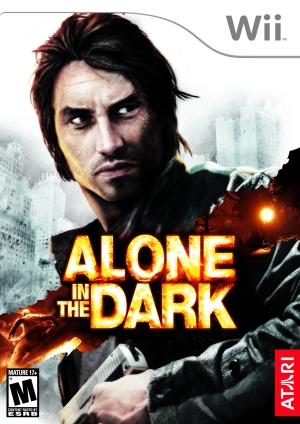 Before the Wii version of alone in the Dark (Atari) was released I watched a lot of pre-release videos and was generally stoked to see this game come out. I have since acquired a copy of the Wii (and 360) version of the game and spent some time playing it. I'd like to say that the game lived up to my expectations but I can't. Read on to find out my opinion on this game.

Alone in the Dark is set in New York City, the Central Park area to be exact. You play a guy who does not know who he is. You are joined by some people who do know who you are yet they don't tell you who you are. Instead they just lament what the others did to you. You also meet people who do not know who you are and don't really care. The game is rated M for mature and there is no shortage of swearing (some of that is you swearing at the game.)

Something bad has happened to New York City that involves lots of fissures opening up and zombie-like critters coming after you. Since this all happens at night expect most of the game to be dark. I don't mean dark as in mood or low light levels I mean dark as in things that you can not see suddenly kill you and you have no idea if something killed you or you hit a button wrong.

After a tedious amount of blinking (yes, there is a control for blinking) you work your way through the opening scenes until you find yourself in an elevator shaft. This is the beginning of the "what did I do wrong/what do I do next" game play problems.

Shortly after the elevator cut-scene you drop a fire house down the elevator shaft and begin to climb down. Then you die. Several times. Then you go and turn the contrast and brightness up to 100% on your monitor and die a couple more times. All the while you sit there wondering what you are doing wrong. After you make it past the elevator shaft you encounter more of these sorts of problems.

This is where much of the frustration of the game comes from. It looks like the developers were trying very hard to make the control scheme as immersive as possible and they did succeed, to a degree. When the controls do work they are great, when they don't you just want to wrap the Nunchuk cord around your throat and put yourself out of your misery.

The basic walking around controls are excellent. You use the Wii-Remote as a pointer and to adjust your facing while the stick on the Nunchuk controls the directions you walk in. Pressing forward on the stick always moves you in the direction you are facing. This is great as it allows you to move sideways around corners. Now, with that said, there are two perspectives you can use when playing the game: first person and second person.

In the first person mode you do not see yourself though you do see your hands. I find this to be the best way to play as it is far better than the other option. In second person you are looking down at yourself. Some people like looking down at themselves and there are points in the game when you do want to switch between the two options. Sadly there are also times when the game switches the perspective on its own. Yeah, you will be walking along and suddenly your perspective will switch and you will go from first person to looking at yourself. A quick press of the C button on the Nunchuk will switch it back but it should not switch in the first place.

I can't help get the feeling that the controls were somewhat rushed. When you compare the controls to those of Metroid Prime: Corruption you can't help but feel a little bit cheated.

One prime problem with the game is that you don't always know what you can interact with in the game. Most of the time a small icon of a button to press will show up on screen to indicate you can do something or grab something. It is not always obvious and sometimes the icon appears off-screen. This is very frustrating. When you add in the dark nature of the game it is very easy to spend most of your time just walking around a room mashing buttons hoping something will happen.

The inventory system is accessed by opening your jacket via some motion-sensing controls. This is neat but once you look inside your jacket you may not know what something is. There are no small text balloons telling you that the round thing in your pocket is a battery.

All in all I think the major failings of the control system are caused by the limitations of the Wii-Remote. The developers tried to break new ground and the hardware let them down.

For a game that was ported from the Xbox360 I have one major gripe: 480i. Why is the game designed to run at 480i? Not only that but why does it not run in widescreen? I was very angry when I fired this game up and saw my HDTV drop down to 480i. Then when the black bars appeared on the sides I got even madder.

Yes I know the Wii is not a graphics powerhouse but it does do widescreen and 480p, why can't this game do that? Even the GameCube did 480p.

The visuals (when you can see them) are good. The color palette is sort of drab but that is to be expected given the mood and subject matter. My only real complaint is the 480i issue.

I really wanted to like this game. I saw the Xbox360 reviews as they came out and I thought for sure that the Wii controls would clear up many of the problems, and they did, to an extent. In the end the Wii version plays like a dumbed down, simpler version of the game.

The graphics are good enough for me though they likely could be better. Same thing goes for the lack of on-screen prompts. I don't need a text bubble to show me what do to but something that at least tells me what I can do with an object (if anything) would be helpful. I found myself wasting far too much time just walking around a room mashing buttons.

Another problem is that of motion sickness. Running in interlaced mode with a horrible lack of lighting only makes such problems worse in those that are prone to such problems. I can normally get around the issue by maxing out the contrast and brightness on my TV but even after doing that everything is still too dark.

Alone in the Dark tries to do too much and fails. The Wii version is very linear and might as well be set on rails. Many things you have to do are not immediately obvious (such as entering a crashed car via one door and exiting via the other to cross into a new area.) and the lack of visual feedback to know what items you can interact with is just maddening.

I wish I could recommend this game but I can't. Well, if you only sort of like someone you could buy this game for them as a gift. It might force them to stop playing video games for a while.


Don't just take my word for it, rent a copy of the game and see for yourself. Better yet play the Xbox360 version.