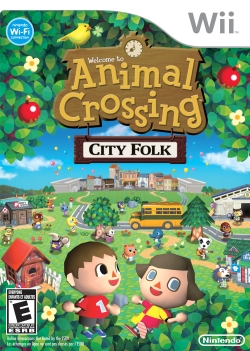 My foray into the world of Animal Crossing began with Wide World on the DS. I later picked up a copy of the GameCube version of the game but it never caught on with me. When I heard a new version of the game would be coming out on Wii I was excited to say the least. Would this new game follow in the tradition of the DS version or would it go if in some new direction?

I'm happy to say that Animal Crossing City Folk is more of the same. Nothing groundbreaking has been added and none of what made the game great has been removed. Some people might consider that too be a bad thing but I see it as a positive.

The city area is a nice bonus and a few of the characters you used to have wait on now have their own shops right from the beginning of the game. Not all characters have the same job they once did (poor Lyle, the insurance business has not been kind to him) and some of the characters that only appeared once in a while now have permanent shops in the city. There is also a kindly old man who will give you free stuff when you visit the city.

Where the GameCube had a train and the DS had a taxi the Wii gets a bus. You will find a familiar face driving the bus as well as a passenger that you will remember from your earlier experiences with the title. 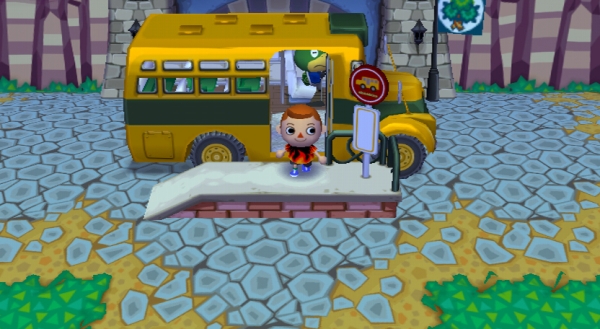 Before getting off the bus in your new town you have a few options. For one thing you have the ability to bring your character over from your DS or make yourself an entirely new character. When bringing a character over from the DS no items or Bells make the journey but your catalog from Tom Nook's store does. This allows you to quickly purchase some of the items you used to own. If you choose to make a new character you are asked a series of questions before getting off the bus.

Once off the bus you are free to walk around town and explore. Unlike in the DS there are four houses for you to choose from in your new town. While the GameCube also had four houses the houses in the Wii version are spread all over the town. After exploring a house you will find Tom Nook outside wanting to know if you want to buy the house. After working out the details he will give you a part-time job at his store.

Long-time Animal Crossing fans may find this bit boring as the jobs are exactly the same as they were in the earlier games. It may just be that these few jobs are the best way to learn about the game and that is why they have re-used them yet again. After you do the jobs for Tom Nook you will be able to begin paying off your mortgage and buying and selling items in Tom Nook's store.

Most of your time will be spent walking around town. Depending on the month of the year different bugs and fish will be available for catching as well as a few seasonal holidays. For example, during the month of November the forest will be full of little mushrooms. Some of these 'shrooms can be sold for big bells to Tom Nook while others are part of the special mushroom furniture set.

Fishing works the same as in previous versions of the game but now there is also a silver fishing rod that you can get. In fact each of the special items now has a silver version. Most of these silver items can be purchased from Tom Nooks after his store has been upgraded. The gold versions are acquired in the same manner as before.

As in previous games you can donate fossils, bugs, paintings and fish to Blathers in the museum.

Animal Crossing just would not be the same if you couldn't have your friend visit your town. City Folk has taken the co-op fun of Wide World and made it better. With the Wii-Speak mic plugged in (or any USB microphone) you can now talk to your friends while you cruise around town together. As before you have to give your friends a special code so that they can come to your city but otherwise it works much the same as on the DS (except for speech). There is also a suitcase option where you can store your character on a DS Wide world cartridge and visit a friend's town that way.

You also have the option to open up your game to WiiConnect24 which will allow things to enter your game from people outside of your own approved friends.

I am happy to say that the controls for this game are awesome! City Folk uses the nunchuk for movement and the two buttons on it can be used to perform most actions. In fact you can do almost everything in game just using the nunchuk. You do still need the Wiimote when working with your inventory.

The developers also made one great improvement in that you can push the control pad down to store your currently active item (shovel, net, etc.) and you can press right and left to cycle through those items. Smacking rocks for bugs is now super easy!

If you like Animal Crossing you will like this. There is nothing majorly new in the game but what is there has been polished and made better.