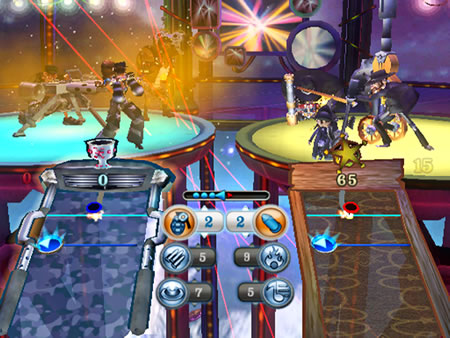 THQ and Planet Moon Studios have teamed up to release a musical combat game for the Wii. Before you get your hopes up you need to understand something. This not an expansion for Rock Band nor Guitar Hero, this is a whole new game. A game that plays more like Wii Boogie than Guitar Hero.

When I first heard about this game I had some very high expectations. Some of those expectations have been met while others have not. Before I give you my review of this game let me tell you what THQ has to say about it:

Enter into the world of musical combat where your rhythmic skills and weaponized instruments are your tools for domination. Welcome to the Battle of the Bands


In each game, a song will be played in one genre for about 10 to 15 seconds and then another, flipping back and forth. Points are earned by beat-matching, and successive matches will automatically launch weapons such as smoke bombs, land mines and flip outs. The more points earned, the more the music will be played in the player's genre.


* Battle of the Bands: Prove your favorite music genre is better than the opponents'
* Weaponized Instruments: Battle to the top of the charts with an array of artillery and attack styles
* Intense Rhythm Action: Feel the rhythm by swinging the Wii-mote in sync with different music melodies
* Innovative Music Switching: Explore chart-toppers mashing up in different genres
* Versus mode: Heads-on battles perfect for social and party game setting
* Adventure mode: Compete with bands of other genres one by one all the way to the Big Boss battle
* Music player: Blast out all 150 songs

If you read all of that you might think this game would be even more awesome than Rock Band, right? Well, it would be if it were not for the controls.

See, Battle of the Bands does not use the cool peripherals of the other two leading music games. Instead it uses the Wii-Remote in a fashion that is similar to that other Wii game; Wii Boogie.

With that said, the game is not all bad. Of all the things listed above I only take exception to one of them: Intense Rhythm Action. There is rhythm in the game but it is scattered. If you are used to the idea of a rhythm game having you do something on every beat you will be surprised to note that this game does not follow that idea. Sometimes you are moving to the beat and other times there will be several seconds of nothing.

Now, I admit to being a mostly rhythmless white guy but even I have some modicum of internal rhythm that allows me to play (and win) these rhythm based games. I tried this on all three difficulty settings and found very little difference (in regards to rhythm) between the three settings. When I was shaking the Wii-Remote I was doing it based on what I saw on screen and not by what my ears were hearing.

The game does indeed have a library of 30 songs. Each one is recorded in five different genres. As you play the game the music will switch between genres depending on who has the upper hand in the battle.

The covers are mostly done well and fun to listen too. In fact, the designers had the awesome idea of allowing the owner of the game to use a jukebox area of the game to listen to all the songs without having to play the game. While listening you can switch between genres of music.

It can be a lot of fun playing a song like "Insane in the Brain" while flipping between Rock, Hip Hop, etc... It is actually more entertaining to do it this way than to have to unlock all the music the way you do in some games. Yes, good or bad, this game does not have any unlockable content.

Unlike those other music rhythm games Battle of the Bands does not use any high-priced controllers. It uses the Wii-Remote.

In order to play the game you need to move the Wii-Remote around:

I have found the left and right shakes to be very easy to master. I do have trouble with the game registering my down and stab movements. No trouble at all with the shake moves. If only the icons you have to react to were paced to the beat of the music...

See those little arrow things on the beatboard? Those tell you what direction to move the Wii-Remote in to hit the beat. The icons with stuff on them are for attacks. Yes, I said attacks. It's not called Battle of the Bands for nothing.

In the middle of the screen you can see a selection of attacks. These can be cycled through with the A button. Once you hit a set number of beats in a row an attack is launched on your opponent. If it hits it causes damage (score loss or something special) but it can be blocked by pressing the "B" button at the right time. No, you can't hold the "B" button down, it only works for a second and not all attacks can be blocked.

The beat markers move from the bottom of the screen to the top. As you complete battles you will get stronger attacks to use.

The funny thing about the attacks is they take no real skill to use. As long as you hit the beats the attacks will launch on their own. The skill comes in only when you block your opponent's attacks by using the "B" button.

To be honest, the game play is not that good. You waggle the Wii-Remote around to hit the beats and that's about it.

There are some great animations going on in the background but your eyes will be focused on the beats coming up so you will miss all of that, your spectators will not.

Even the "unique" bands are not that interesting. They say some stereotypical things during the cut scenes but that is about it. Playing as one "Rock" band is just the same as playing as another. I would say that the attacks are different and that it makes a difference but, if you are the person playing you never see that stuff because you are too busy focusing on what beat to hit next.

Hearing the music change can be fun, for the first couple songs, but you will quickly figure out that it is easier to use the media player and switch songs back and forth at your own leisure. In fact, because the music being played has very little to do with the actual playing of the game you can turn the sound off and play just as well as with the sound on.

Because you can't always tell if you are hitting the beats properly the Wii-Remote will vibrate when you correctly hit a beat. This little bit of force feedback is nice but it would have also been nice to hear something when you screw up.

You would think a game like Battle of the Bands would have an awesome multi-player aspect. Perhaps campaigns or something? No. Each of you simply pick a band to represent you, a song to battle over, a difficulty level and a stage. Yup, that's about it.

This game will grow on you if you give it a chance. It's not the best rhythm game for the Wii but it is also not the worst. Is it worth $50? I would have to say no. This game belongs in the $40 range.

Every game has a target audience. When reviewing a game I like to think of who the game is being marketed for. So, who would like this game?

If you liked Wii Boogie you will probably like this one. This game also works well as a party game where you do not have the space to setup a Guitar Hero or Rock Band kit. There is a lot for the spectators to watch on the screen while the two players battle. Just be sure to switch both players out after the battle is over to avoid injury to the wrist.