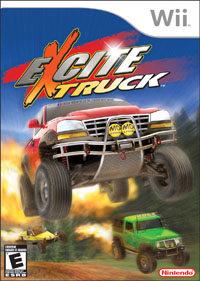 One of my favorite games from the NES was Excitebike. This NES classic put you in the role of a motor-cross rider and even allowed for some customization of the course you rode on. Excite Truck is the great grandson of that old game.

Developed by Monster Games, this Wii launch title is a great game. Like the old game, you will be racing against other drivers, going for big air and trying to recover from a crash as fast as possible. The similarities stop there. This is not a remake as much as it is a new game with roots in the old.

For starters, there is no track editor in Excite Truck. Instead there are four cups and each one uses multiple tracks themed after real world locations.

There are three more cups; Silver, Gold and Platinum. These become available as you complete each cup. i.e. complete the Bronze cup and the Silver cup unlocks.

There are also multiple vehicles you can unlock as you progress in the game. You start with three basic vehicles.


Not only can you unlock more vehicles as you progress in the game but you can also unlock new paint jobs for your vehicles. 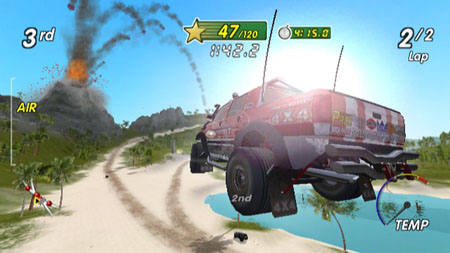 Game Controls (Wii-mote)
It might take you a race or two to get used to using the controller to steer your truck. You hold the Wii-mote sideways in your hands with your left hand over the IR end and your right by the plug socket.


There are some more advanced controller techniques such as; air spins, tree runs, truck throws, jump combos, and more! Lucky for you these advanced techniques can be practiced in the games tutorial mode.

Multi-Player (two-player)
Sadly, this is where the game is not so good.

Because this is a race game and you need to be able to see all around your vehicle there is no good way to split the screen. If they had split the screen horizontally it would not have been too bad but they chose to go with a side-by-side split screen and the results are very depressing.

Other Game Modes
Once you beat the regular Excite cups (at "S" level) you can unlock the Super Excite tracks. Until then you can use the following additional game modes.


Music
The music in the game is so-so but there is a saving grace here! If you have music (mp3 files) on an SD Card you can listen to them while you race. That's right, you can race to the soundtrack of Conan the Barbarian if you want to (I do)!

Conclusion
I greatly enjoy this game. I purchased it when I purchased my Wii (instead of Zelda) and have not tired of it yet. Even though the two-player mode in the game is about useless this is an excellent one player game. If you just want to try it out why not check out the link in my sponsored links over in the sidebar? One of HMTK's sponsors is an online video game rental service.