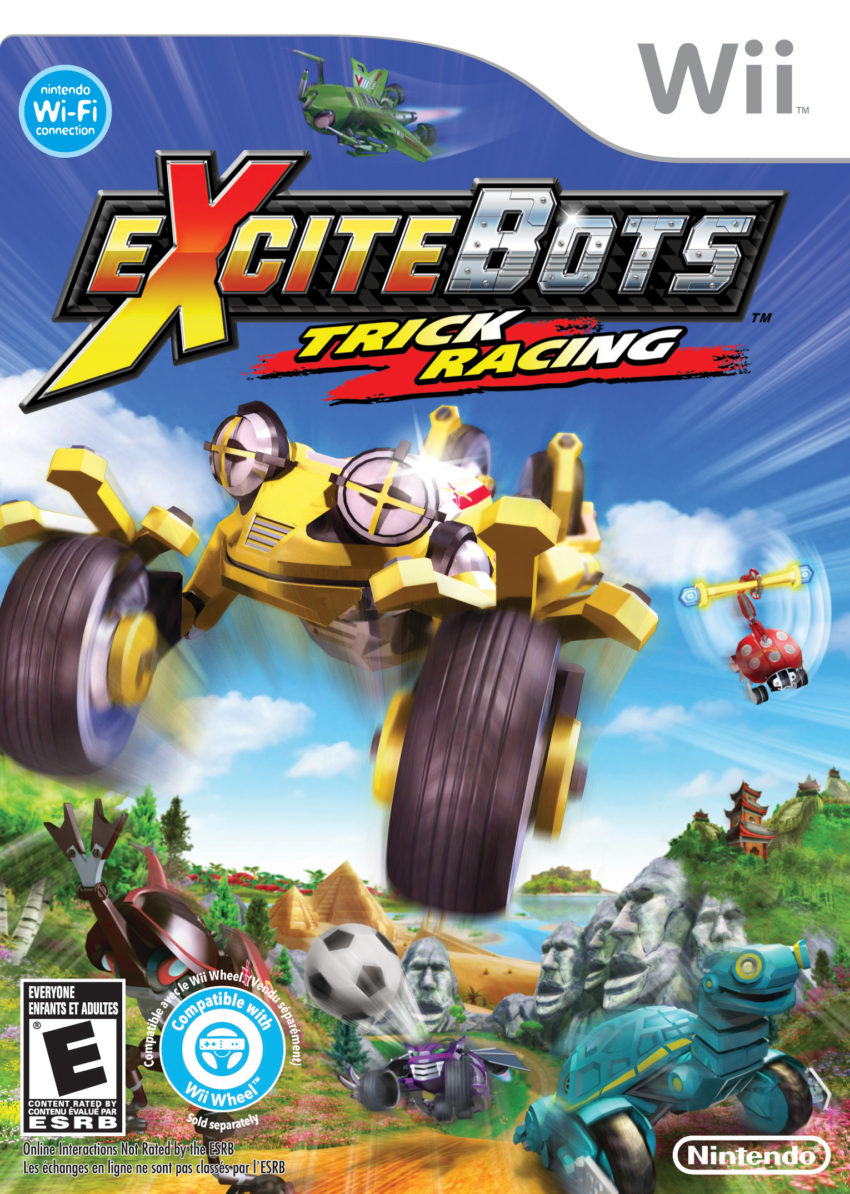 When the Nintendo Wii launched Monster Games was responsible for one of the launch titles: Excite Truck. This 1 - 2 player trick-racing game was the first one I purchased for my Wii. In fact I purchased it at the same time as I purchased my Wii. Yes, I bought it before I purchased the Zelda game!

Not long after Excite Truck proved to be a success rumors spread across the Internet about a successor to the game, an Excite Truck II if you will. Screen shots leaked showing Miis driving trucks and other fun things. To say my hopes were high is an understatement.

This weekend I picked up a copy of Excitebots: Trick Racing ($49.99 with wheel or $39.99 without). I started playing it last night and my first thought was, "this is Excite Truck 2?"

Some things are better and other things are worse than the original. Read on to hear my thoughts... 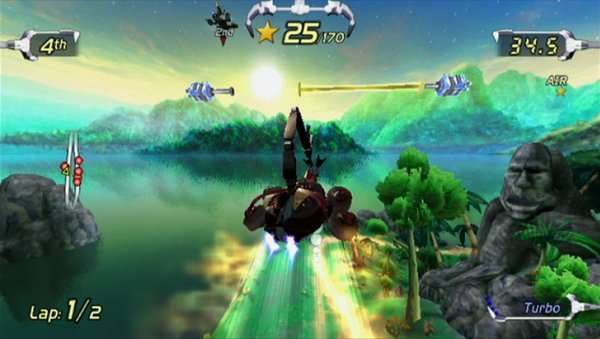 There are two boxed versions of the game. One is an over-sized box that comes with a Nintendo Wii Wheel while the other is just the normal white Nintendo Wii game box with the game disc inside. There is a $10 price difference between the two versions so if you already have a full allotment of Wii wheels save yourself a few dollars and buy the cheaper one. The game only allows for two players locally so you don't need more than two Wii wheels if you have kids that like to argue! 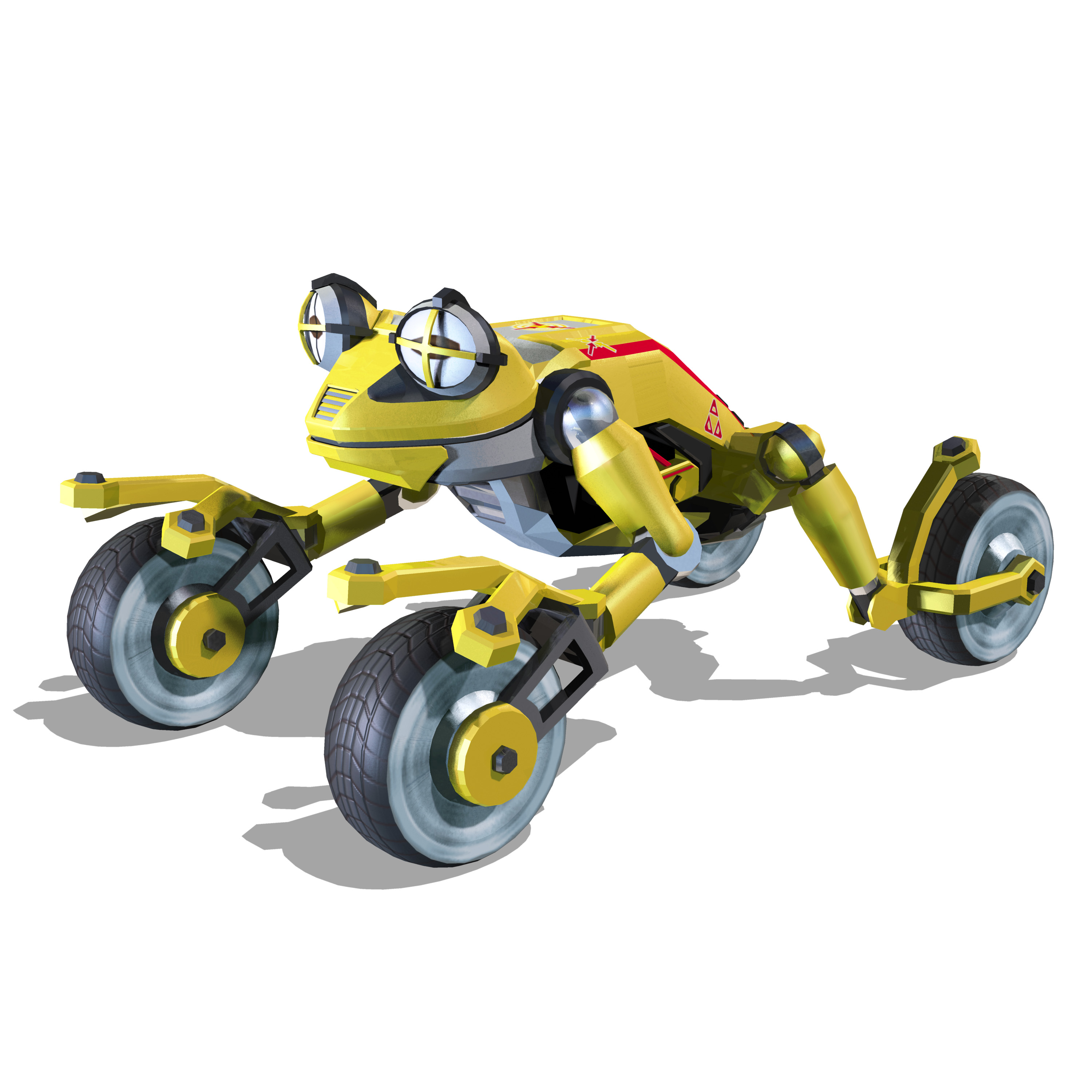 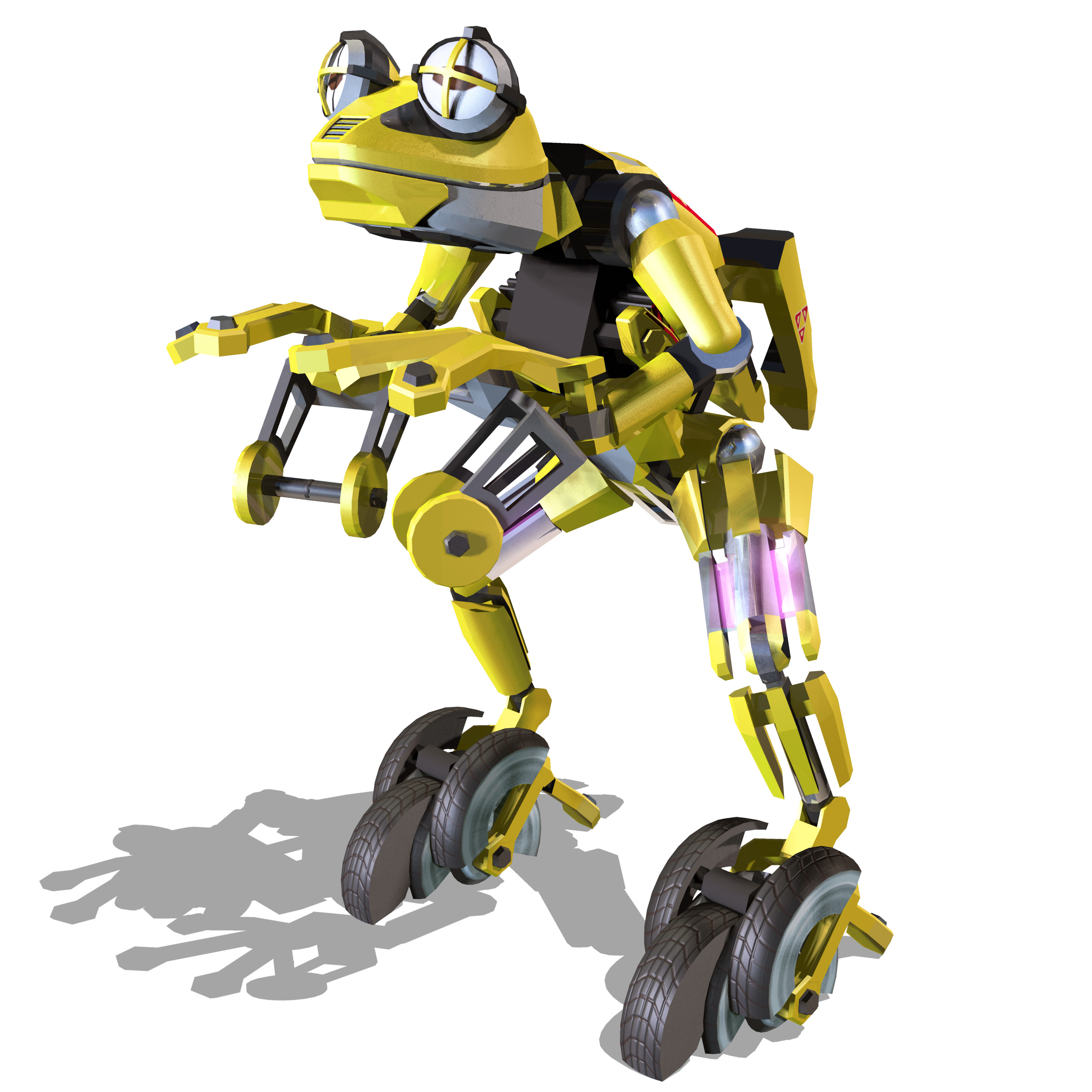 What they say about the game

High-speed action. Robotic insect and animal racers. Wii Wheel controls. Bowling, poker, clowns – and sandwiches! Add them all together and you get the wild, nonstop fun of Excitebots: Trick Racing.

• This game takes the big-air thrills and simple pick-up-and-play controls of Excite Truck™ and ramps up the fun with a constant barrage of funky challenges and mini-games performed at blinding speed. Players shoot goals, throw pies and even play poker in the middle of rowdy races around off-road tracks.

• Having your vehicles drive, walk or fly around the track quickly is one thing, but it's more important to go around in style. Players earn stars for huge jumps, cool tricks and daring feats at high speed.

• Six players can race online via Nintendo Wi-Fi Connection in both Excite Race and Poker Race modes. If friends can't join online, players can exchange ghost data via WiiConnect24™ and challenge their friends to outdo their most daring tricks.

Just as in Excite Truck, drivers can hit blocks that morph the terrain before their eyes and create ramps from which players can launch mega-jumps. Players can aim for and swing around boost bars or open presents that unleash a variety of wild items, such as bottle rocket boosts or clacker mouths that chomp on other racers to slow them down. Players also can activate in-race mini-games including:

• Soccer: Drive into the soccer ball and attempt to hit it into the goal.

• Bowling: Drive through the pins and attempt to get a strike.

• Darts: Line up your bot and let the dart fly. Try to hit bull's-eye in the distance.

• Clowns: Hit the clown in the face with a pie by throwing it at just the right angle and speed.

• Sandwiches: Drive through the ingredients in the proper order to make a delicious sandwich.

What I have to say about the game

Let me start out by saying that the core game play of Excite Truck is in Excitebots. It's not about who comes in first but who scores the most stars. It is possible to get a higher score than the player that comes in first but with a 50 star bonus for first and 25 stars for second you need to be really good to cover that point spread! 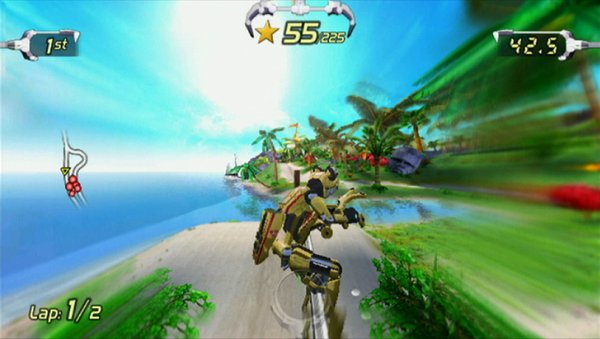 Unlike Excite Truck there are no trucks in this game. Instead you use a series of bots that can morph between vehicle and robot modes via special items you run over in the game. While steering in vehicle mode is very much like Mario Kart on the Wii movement in robot mode is far different. Even though I have played the game for several hours I have yet to master the movements required to make my bot run across the race track.

The game also sports a number of trick bars that you have to latch onto with a hook that extends from your bot. Some bars can be ignored while the red bars have to be grabbed onto else it will count as a crash and you will lose some time and have to try again.

Each bar is a little bit different. The red bars have you move the Wii wheel in a spinning motion while your bot spins on the bar. If you can time your motions with the movement of your bot you get a huge bonus when you fly off of the bar. Other bars only require that you let go at the appropriate time to get a bonus.

I have found no major problems with the bars and they add an extra element of zaniness to the game. 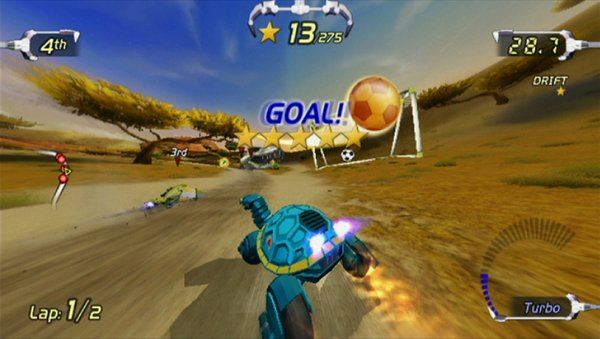 The bars are not the only big change from Excite Truck. There is also a large number of mini-games you can play separately or during the course of a race. These include running over bowling pins, throwing darts, kicking soccer balls into nets and other off the wall activities.

Speaking of stars. In Excite Truck stars were used to see how will you did on a race and that was it. As you achieved certain goals new vehicles and tracks would unlock. Excitebots: Trick Racing is a little bit different.

In Excitebots: Trick Racing you bank your stars after each game and use them to buy new colors and new vehicles. You also use them to buy icons, trophies and dioramas. Some Items to purchase become available only after achieving a certain goal. 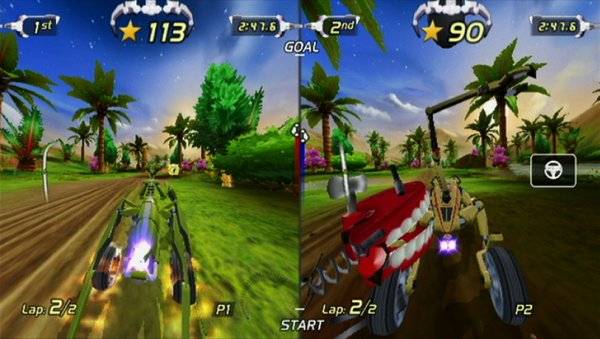 After logging about ten hours into this game I feel that I have played it enough to form an opinion. While I am a huge fan of the original Excite Truck I find that this new game is not as good as the original. I find that the bot modes add an unnecessary amount of complexity to the game. I also feel that too much is locked from the start. While Excite Truck allowed for you to use any color on your vehicle Excitebots: Trick Racing only allows you to pick from four colors. All other colors must be purchased for a large amount of stars.

Vehicles are also expensive and several are darkened (as was the case in Excite Truck) and must be unlocked before being able to be purchased. While I do like the idea of using stars to unlock things I don't like having to spend several thousand stars just to be able to drive a purple vehicle!

Split-screen multi-player is the same as in Excite Truck with the screen being split left and right. Online multi-player allows for up to six player to compete on the same course. Oh yeah, friend codes are used if you want to play with your friends.

I still prefer the original.