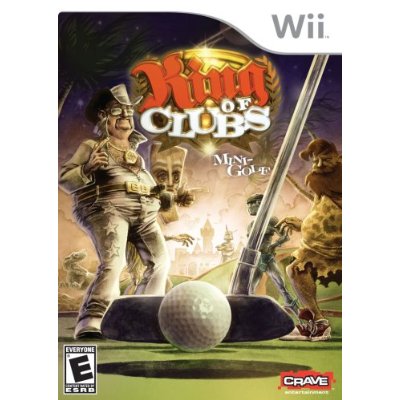 I admit to being a sucker for a good golf game on the Wii. I've been addicted to the Super Swing Golf games since the first one came out a few years back. It should be no surprise to any of you that I have also been searching for a good mini golf game for the Wii.

The Wii should be the ultimate platform for a golf game. The Wii remote does an excellent job as a golf club simulator and as bad as the golf portion of Wii Sports is it still does a decent job of simulating a game of golf.

The King of Clubs bills itself as "Miniature Golf With Attitude". Some of you may remember my recent review of Fun Fun Minigolf and how disappointed I was after paying 900 Wii points. Any guess on how I'm going to feel about this game that I spent $14.99 on?

In King of Clubs, you'll tee-off against the wackiest golfers this side of Augusta – including Bubba, the Elvis impersonator. Take advantage of a magic bag full of tricky golf accessories – like special balls and trick clubs.

Laugh through 96 competitive mini golf holes that will leave you in stitches. Thank you. Thank you very much.

That is what the back of the box says, but does it deliver? 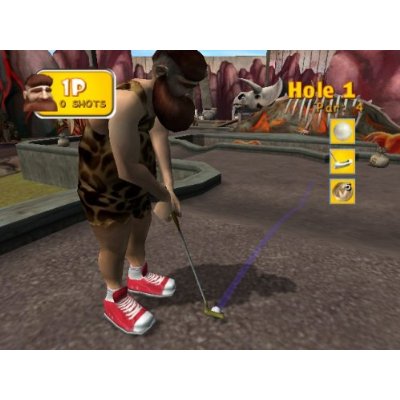 One of the first things that sets this game apart from all of the other golf games I have played on the Wii is that is uses the nunchuk. Yes, when you swing your "club" you are also holding a nunchuk. This might sound awkward but it's not.

The nunchuk is used to control the camera when planning your shot. You could play without it but you would lose the ability to lean the camera right and left. No other buttons are used on the nunchuk.

How hard you flick the Wii remote has no effect on the ball. Instead you adjust the power of your shot by raising the angle on your remote. This sometimes works but I was never able to get the remote to measure a power of zero. It would always register at least a few inches of power on the power bar. After locking in your power (hold the A button) you need only flick the remote for the shot to be taken. 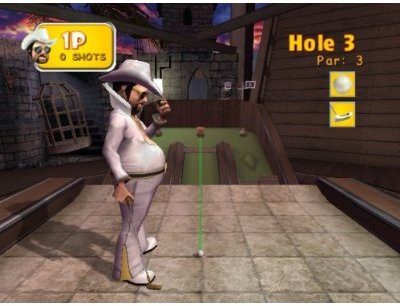 The game offers several characters for you to choose from when playing. Well, sort of.

When you first play the game in single player mode you play as a guy wearing an old pair of 3-D glasses. As you progress through the game you can unlock the six special characters and play as them. Yes, I said unlock. Get used to hearing that word because I'm going to be saying it a lot in this review.

Characters range from the lowly Pree-'istorick Course Pro Rocky to the King o'Clubs course Owner Big Bubba King. Each one is the course pro for each of the five different courses in the game:

Pree-‘istorick Course
The J’rassick Classick and Tranno-sore-us courses are run by a hide-bound character called Cleatus “Rocky” King with a pro rating of Level 1. While Rocky may look primitive, to movie folks, them’s “rugged good looks.” And when he’s swingin’ away with his Guide Supreme club, his game is anything but backwards. Stay alert or you’ll be history. Beat him and his space age* club will be yours.

Ee-jipshun Course
You’ll need to golf like an Egyptian to make it past the Giza Teaser and Valley of the King courses. They’re ruled by a pharaoh of a fella called King Putt III (his real name is Don Hammer) whose Pee Wee Putter is perfect for playing around pyramids. With a Pro Rank of 2, you’d better be in peak performance when you play against him or you’ll be crying for your mummy fore he’s through with you. 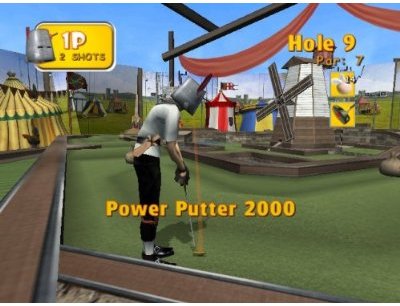 Medi-weevel Course
Sir Pars-A-Lot – aka that English Guy wearing the tin can on his head – may ‘peer like a pushover cause he’s so polite an all. But when you step onto the Summer Knights or Camelot Capers nine, this Limey can be right nasty with his Level 3 ranking and tricky Swerve clubs. Best advice for beatin’ the tin pants off this feller is to keep a stiff upper lip and play a smashing good game of golf. Right-O, pardner.

Tropical Course
You’re probably thinkin’ yer pretty good if you’ve decided to take on Tiki – the laid-back alter-ego of Level 4 ranked Emilio Garcia. But don’t git lulled into complacency when you come up agin’ him on the Sandy Shores or Typically Tropical courses. If’n you do, you’re likely as not to get blown away by his Silver Wedge Golf Clubs after he lures you into one tough hazard after another.

Foochure Course
As Captain Thrust, Rufus Jackson always looks to the future. And for most opponents, that means watching him beat them pitiful like out there on the Balls in Space or Par Wars nine. His Golden Wedge club drops chip shots like magic so you’d better have some magic of your own to even have a chance. With a Level 5 rank, only one other pro has what it takes to top him – big Bubba hisself.

At this point you are probably thinking that this game sounds awesome! So was I...

There is also a Pro Shop where you can spend the money you earn while playing to buy items. These items include special putters and 'one use' balls. Don't get too excited yet... These items are 'unlockable'!!!

What about the putters you say? 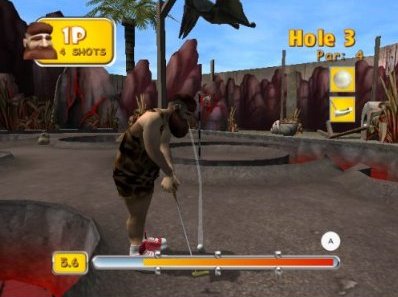 Getting tired of the "unlockable" nature of the game yet? It gets better.

Even though there are 96 holes in the game you can only play on 9 holes when you first play. Not only are you limited to the initial 9 holes but you can't unlock new holes unless you do well in single player mode.

I have some games that have the unlockables added in (Smash Bros.) but most of these allow for unlocking things in multi-player mode. A lot of them also provide you with a bunch of cool arenas to play in before you have to unlock anything. Can you imagine playing Mario Kart and having to use Mario and the standard kart on all courses until you finish them all in the top three? Well, that is kind of like what you face in this game.

Game Notes
Let me say right away that I did not get much further than the second course before giving up. I encountered multiple problems in that the game did not provide adequate information on each course. It tells you where the hole is and you can pan around but it gives you no information on the effects of the turf you are putting on. Some turf has a high resistance to it which forces you to hit the ball harder than you think you want to while other bits of turf offer almost no resistance!

Another problem I encountered is the extremely crappy graphics. Yes I know it is a Wii game but look at Metroid Prime Corruption. That game is on the Wii and has some awesome graphics! So does Super Mario Galaxy. This game has very dark and very muddy graphics. They are painful to look upon.

I can not recommend this game to anyone. Save your $15 and buy something else. Unless you don't like someone. In that case buy them this for their easily-frustrated children and watch the fun ensue!