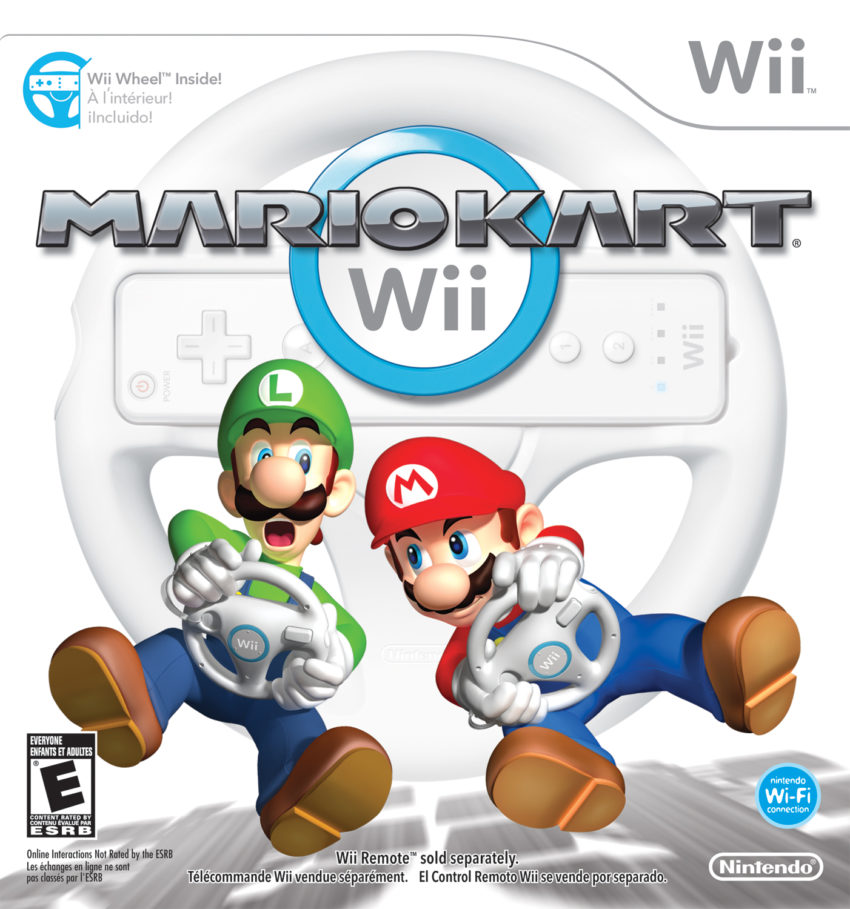 Mario Kart Wii is the sixth installment in the Mario Kart series from Nintendo. In this series of games characters from the Mario universe drive go-karts around race tracks and compete to win races or battles. The use of items in the game makes this more than a simple racing game. The weight of the characters and the kart chosen also add a small amount of strategy/skill to the game play. New in the Mario Kart Wii game is the inclusion of bikes. 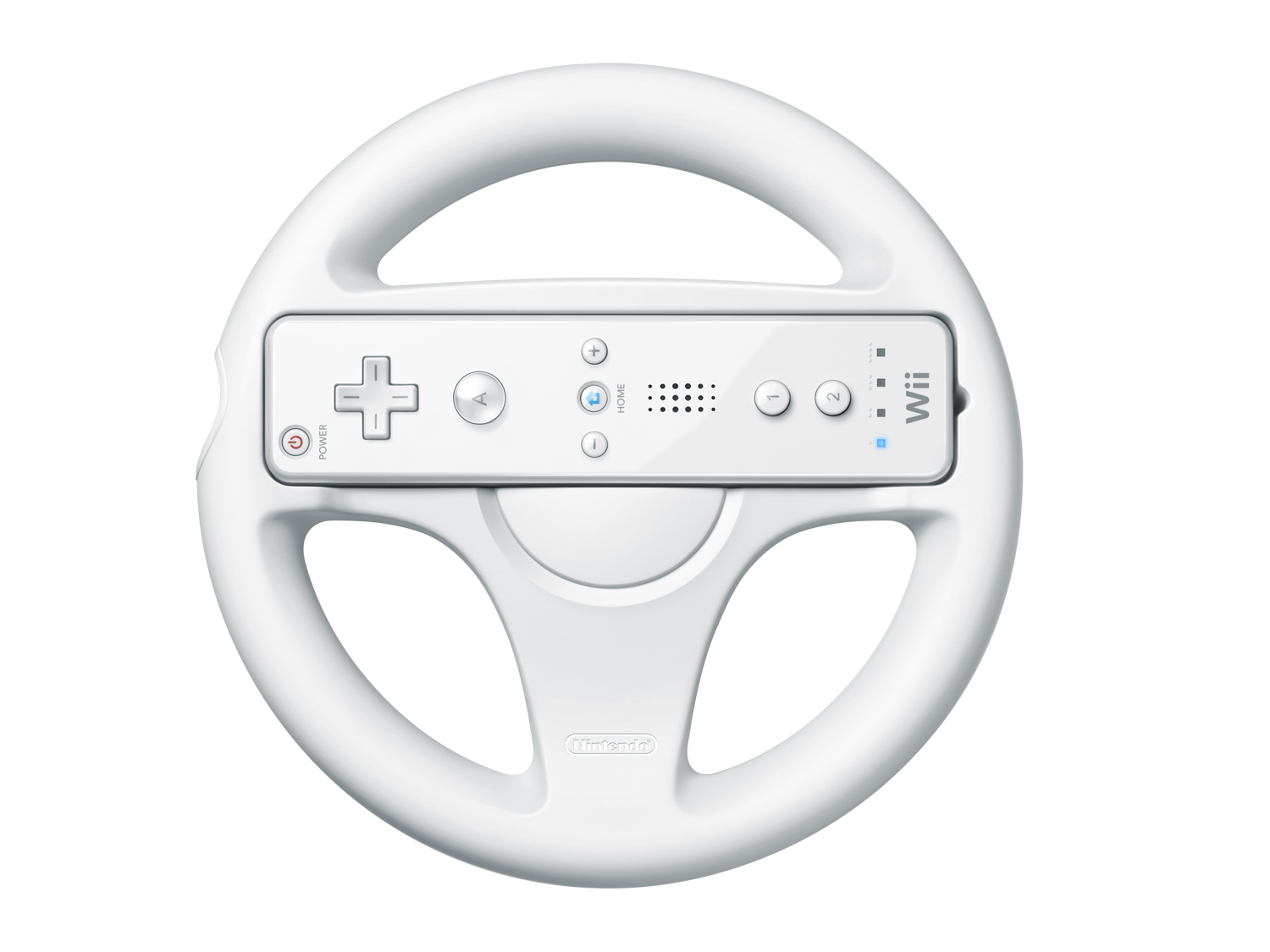 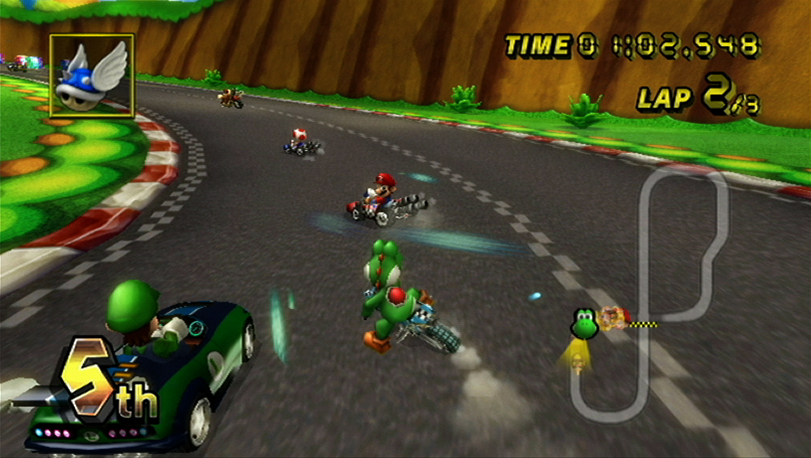 One of the first things that you are going to want to explore is the difference between karts and bikes. Aside from the fact that bikes only have two wheels what makes them different than karts? For starters they handle differently than karts and you can pop wheelies in them!

Another thing to consider is that they are thinner than their kart counterparts. This is very important to keep in mind because the same track may play very differently when you are on a bike as opposed to driving a kart.

Each of the first two modes, once beaten, can be unlocked to function in mixed mode. Each mode contains eight cups. Each cup consists of four three-lap races. Depending on how well you do in each race you will earn a grade from three stars (the best) to E (the worst). Clearing cups is one of the ways to unlock some of the game's content.

Each cup is exactly the same across the three modes and only the first four cups of each mode are unlocked when you first race. As you clear each cup the next one will become unlocked.

Time Trials
How good do you think you are? Do you want to practice each course in the clear before knocking your friends out? In the time trial mode you race on each track by yourself and with only three mushrooms (turbo items). When you rack up the best score the game saves a ghost of your performance. You can then race against your ghost or other ghosts you download.

The game comes loaded up with some ghosts of Nintendo players. Beat them and you will unlock some goodies. You can also use the Nintendo WFC element of the game to download ghosts of your friends and the top players in your region or the world.

I have found that downloading the ghosts of the top players is very helpful in showing you the best way to run a course in the shortest amount of time. The only thing that bothers me is that every champion uses the exact same combination of character and bike. One might think the combination must be broken if all the champs are using it but that is not so. Just because that combo works when the field is empty does not mean it will work when the field of full of competing players. 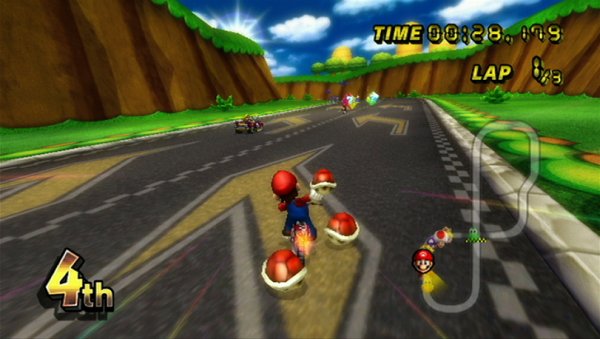 General Game Play
The game play is pretty much the same as all other games in the series. Get in a kart, drive real fast, throw items at other players while avoiding those thrown at you and cross the finish line first. It sounds kind of lame when you break it down like that but the Mario Kart games are far from lame.

For starters there are three weight classes of characters; light, medium and heavy. The karts and bikes also have different capabilities and are rated via a bar graph system on things such as top speed, handling, acceleration, etc. Picking the right combination of character and vehicle from the start can put you at a competitive advantage before the race even starts. That's not to say that the race will be over before it begins because Nintendo was "kind" enough to build in a rubber band system.

One of the biggest complaints you read on the Internet about Mario Kart Wii has to be the dreaded Blue Shell. This hand-held nuclear device will seek out and destroy whoever is in first place when the shell is launched. Even if someone else passes you it will not change targets!

There is a way to avoid it but it takes extreme skill and timing. As soon as you see the shell above you begin to rise up before it falls upon you use a mushroom (turbo) and the shell will hit the ground behind you and explode. If you time it right the speed boost will put you ahead of the blast radius and you will be safe.

Red Shells home in on the nearest racer in front of you (when fired) and can be avoided as well. for one thing if you race with a string of bananas hanging behind your vehicle the red shell will impact on a trailing banana rather than you. The same thing works if you are surrounded by three green or red shells. If you find yourself with only one banana or one shell (green or red) you can look behind you and lob that item at the shell headed towards you.

The items you get in Grand Prix mode vary depending on how far back in the pack you are. If you are up front you will get bananas and a single shell. If you are in the back you are far more likely to pull blue shells and Bullet Bills.

When you use a Bullet Bill you become a large Bullet Bill and hurtle your way forward at an incredible speed. Anyone you touch along the way gets knocked to the side as if they wrecked themselves. A handy trick is to get one of these for being in the back of the pack and saving it for later in the game. When you are in Bullet Bill mode you are immune to blue shells and other nastiness. It does not last long but it can save your butt if you use it wisely.

Multi-player
Mario Kart Wii allows for up to four players to play locally and 12 via Nintendo WFC (two of which can be using the same Wii). In two player mode you have a top to bottom split screen. Three and four player games break the screen into quarters with the lower right quarter showing the leader in a three person race.

When playing via the Nintendo WFC the frame rate drops a bit. some of you might think this is bad but it is actually good thinking on Nintendo's part. If the frame rate was not dropped ahead of time any amount of lag could cause the game to enter "herk and jerk" mode. This is something that players of Super Smash Bros. Brawl are familiar with.

When playing online you have the option of playing with friends (the dreaded friend code) or players in your region or worldwide. I often opt for the worldwide option as more players use that and games load up rather quickly.

Once the game fills up game play is much like playing at home. Once the course ends any players that have dropped out are replaced with new players. All old players remain. This means that as you play a core group of players will remain in the game and you can form some quasi-rivalries based on who keeps kicking who's butt!

Nintendo has also offered some tournaments online for players to compete in. Installing the Mario Kart channel allows for easy access to the online component of the game.

Unlockables
Sadly, Mari Kart Wii has a ton of stuff that is not usable until you unlock it. Please see the list below for more information:

Defeat a normal course ghost with a time at least seven seconds faster to unlock the expert ghost for that course.


Get a “One Star” rank or better in all Cups, including those in Mirror mode to unlock an alternate title screen and ending sequence.

When the countdown starts, wait until the “2″ begins to disappear, then hold 2 to get a boost at the start of the race.


When you fall into an obstacle, press 2 precisely when you land to get a temporary boost.

You can add a star next to your profile name on the results screen and the Wi-Fi races by completing all Grand Prix races with a certain rank:

One star profile name: Earn a “One Star” rank in all Grand Prix races.