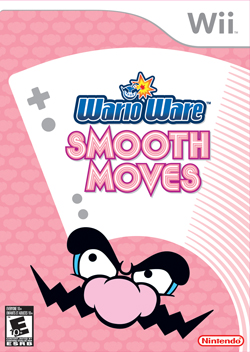 Everyone needs a game that you can play with 12 players, is WarioWare: Smooth Moves the game? Only time will tell. Until time does tell you can read this review and decide for yourself.

When a micro-game begins you are shown how to hold the Form Baton and then given a one (or two) word instruction. That's it! It is up to you to figure out what to do in order to win the micro-game. 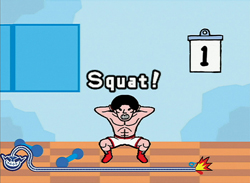 One such micro-game is the one pictured at right. You hold the Form Baton on top of your head in the "Mohawk" form and you have to squat down and then up again. That's it! Squat is one of the easier games to figure out but there are some that will at first stump you.

WarioWare: Smooth Moves has more than 200 micro-games included. The micro-games are as much fun to watch as they are to play. Where else but WarioWare can you sit back and watch your Uncle Fred try to do a hula dance?

You need to progress through the story mode before you can unlock the multi-player mode but, it should not take you more than a day and you will gain experience in learning how to play the micro-games. 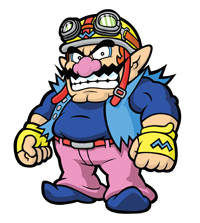 While pursuing a strange creature that stole his snack, Wario accidentally stumbles into an old building called the Temple of Form. Inside, he finds a mystical treasure called the Form Baton, which looks suspiciously like a Wii Remote. He discovers that the Form Baton gives him special powers depending on his "form" - the way he holds and moves the baton. Wario decides to pocket his new treasure, and soon the form craze spreads through Diamond City.

Characters:
The cast from previous WarioWare games is back with new micro-games. Besides Wario, Mona, Jimmy, 9-Volt, Orbulon, Dr. Crygor and the rest of the old crew, this title also features appearances by Master Mantis, Young Cricket, Penny Crygor and many more.

Multi-Player Modes
There are several multi-player modes available but... They failed on several levels.

One of the multi-player modes has players competing until they fail a game, the last player left is the winner. Another mode has players pumping up a balloon and if the balloon pops while it is their turn they lose. One more mode, called the Bomb, has players playing micro-games and then they get to pick who goes next and what Form Baton mode they have to use but, it's game over when one player loses.

If they had taken the idea behind the bomb game and merged it with the one where you play until you are the last one left it would have been great! Instead you are left with a bunch of multi-player modes that leave you feeling like they were rushed out the door and not properly play tested.

I have the game and I do get enjoyment out of it but, I can't help feeling it could have been better.