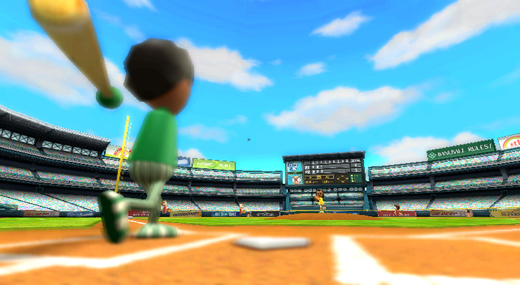 So, you think you're Babe Ruth or Hank Aaron? Listen up water boy 'cause you ain't nothing unless you know how to hit the ball.

In Wii Sports Baseball you have a team of players that you control in a short three inning game of baseball. Well, you don't exactly control them as all you do is pitch the ball and bat. the outfielders, infielders and runners all do their own thing.

Batting
Not much to say here. You just swing the Wii-mote like a baseball bat. Some pitches require a little bit of english on the swing to hit them. If you hit the ball early you will hit it left, hit it late and it goes right. Send it far enough left or right and you get a foul. Fouls count as strikes unless you already have two strikes.

Pitching
With pitching you have a lot more options.

Tips
When you swing the bat from low to high you can often get the ball to travel further. Watch out for the splitter pitches though as they are very hard to hit. If your opponent keeps pitching splitters just bunt. If they still keep throwing splitters than whack him with a wiffle ball bat a few times until he learns his lesson!

When you are pitching throw splitters! They are hard to hit and, as long as your opponent has not read this, you will beat him!

I have also found that aiming curveballs and screwballs with an extra tap of the control pad so that they almost hit the batter is also a great way to land some strikes! Just be careful though and don't throw two of the same pitch in a row once you start playing at the Pro level 'cause the computer player will hit them!