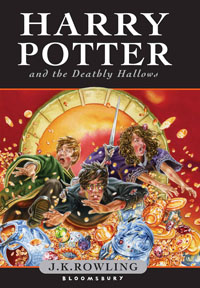 >Let me start off right away by telling you that I have no advance knowledge of the last Harry Potter Book; Harry Potter and the Deathly Hallows. What follows is only what I believe based on my reading of the previous books.

I know some fans of the book may be shocked to read the above statement but I believe it to be true. Why do I think Harry Potter must die? The key reason is that Harry Potter and Voldemort are linked. Voldemort has been trying to kill Harry since the very first book. Likewise Harry has slowly begun to realize that as long as Voldemort exists his life is in jeopardy.

Several books ago we were introduced to the item known as a Horcrux. These devices, made by Voldemort, hold parts of his soul.

A Horcrux is defined by Rowling as a "receptacle in which a Dark wizard has hidden a fragment of his soul for the purposes of attaining immortality." With part of a wizard's soul thus stored, the wizard becomes immortal so long as the Horcrux remains intact, typically hidden away in a safe location. If the wizard's body is destroyed, part of the soul remains preserved within the Horcrux. The Horcrux is reminiscent of the phylactery used by the undead creature known as a Lich. However, the destruction of the Horcrux creator's body leaves the wizard in a state of half-life, "lesser than the meanest ghost." Lord Voldemort was left in this state when his attempted use of a Killing Curse on the infant Harry Potter backfired upon himself. The magic involved in the creation of a horcrux is considered one of the worst of the Dark Arts.

It has been suggested that the death of the infant Harry Potter was to be used to create a Horcrux and I believe that when that act failed Harry Potter became a Horcrux. Now this is also where things get interesting.

Dumbledore has stated that Harry's mother performed some sort of spell that protected Harry when Voldemort tried to kill him. Is it possible that Harry Potter is not a Horcrux for Voldemort but is instead one for his mother? The death of Voldemort would satisfy the "supreme act of evil" needed to create a Horcrux.

Some folks might scoff at the idea of Harry's mother doing such an evil thing but she may have done so.

Think about this as well: Voldemort used Harry's blood to restore his body. When Dumbledore heard this he had a gleam of triumph in his eye. I think it is quite possible that Dumbledore knew that Voldemort considers Harry to be a key item (Horcrux) in getting his body back in order. As to whether this will bode well for Voldemort is another question entirely. If Harry is a Horcrux for someone other than Voldemort but Voldemort thinks he is one of his own Horcruxes then things may get very interesting indeed!

So, must Harry Potter still die? Maybe not.

I do think that for Voldemort's plans to succeed Harry Potter must die. I also think that the mark on Harry's head must somehow be removed before the final book ends.