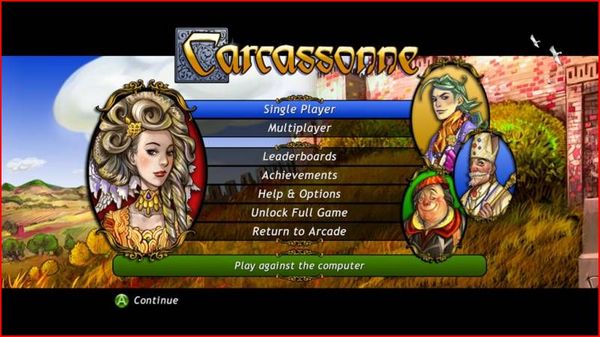 My love for video games is right up there with my love of board games. Both are great ways to spend your leisure time. Video games tend toward the free time when you are by yourself while board games require the presence of other people. Unless you play some of the older Avalon Hill games that came with solitaire rules or if you are just kind of weird...

One thing I truly love about the Xbox Live service is that I can get my game on even when other people are not around. I'm not just talking about beating a sad little A.I. into the ground either. I'm talking about laying the smack down on real people via Xbox Live.

So far I have been having a lot of fun playing Carcassonne on the Xbox, which is funny because I have never played the board game version. I know at least one of my friends has it but we never got around to playing it. Now that I have played it on the Xbox (with some of the expansions) I can honestly say that I will likely never play the board game version. It's not that the game is bad either. It's because the Xbox version is so good. 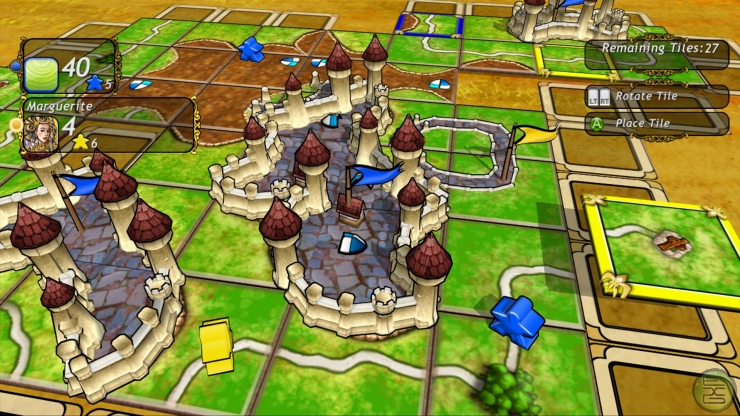 If you place a meeple on a road section it stays there until the road is complete and scored. Same for placing a meeple on a city. The one exception occurs when you place a meeple on a piece of farmland. In that case the meeple never returns as farms are not scored until the game is over. It is also important to note that when placing a meeple it can not be placed in such a way as to touch another meeple on that structure. A common tactic is to place a new section so that it does not touch the existing section but will once that area is complete.

Another thing to keep in mind when placing your meeples is that if someone else places more meeples on that road or city than you did then you will not score points. If you tie for most meeples than all players who tie score the same points. Either way all meeples are returned when the structure is complete.

There are also a few monastery pieces in the game that score once all eight surround tiles are placed. 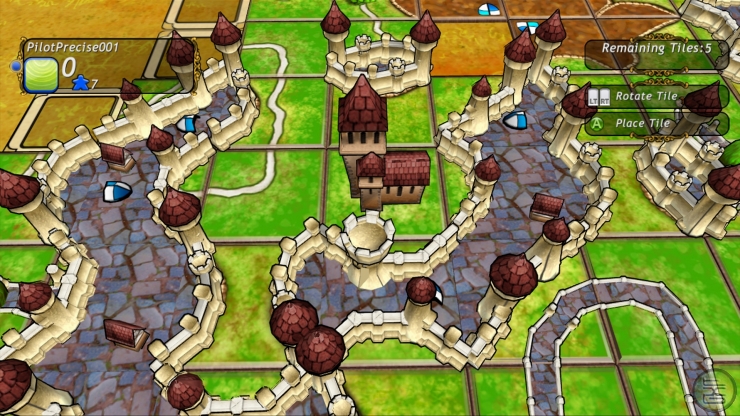 Why It Is awesome

So, what makes this version so much better than the board game? In a word; scoring.

Because the system keeps track of the score and enforces the rules you never need to worry about how many points you have or if someone else can legally place a meeple somewhere on the board. This is most problematic with farmers. It is easy to make a mistake and place a farmer on a farm that already has a meeple on it.

The other thing that makes this game great on the Xbox is the availability of players at all hours of the day. If you create a game session it will fill up in under five minutes. You can also reserve spots for your friends or design the game to only allow your friends and keep out strangers. 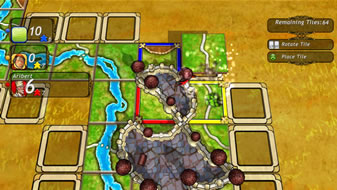 If you get tired of the basic game the River expansion is included. When playing with the river the initial setup is a little different due to the fact that you construct a long river that goes in a mostly straight line across the playing area. After the river is completed play continues as normal.

If you like the River expansion (and have 300 MS Points) you can invest in the 12 piece Rivers II Expansion Pack. These new tiles include a fork in the river, as well as elements from the board game expansions.

For another option (and 300 more MS Points) you can purchase the King and Baron Expansion Pack for Carcassonne. This pack only has five tiles in it but it adds more than that to the game play. The player with the largest completed town gets the King icon next to his gamertag while the player with the longest completed road gets the Baron icon. During end of game scoring the King gets an extra point for every completed city while the Baron gets bonus points for completed roads.

If you like board games and video games you should seriously consider adding this one to your Xbox Arcade collection. It only costs 800 MS Points and supports up to five players over Xbox Live. You can play four player local as long as each player has their own controller.

This was the first game I purchased on the Xbox and I am not in the least bit sorry I did. I've already unlocked 10 of the 12 achievements in the game and of the remaining two one is based on total points (will eventually get) while the other requires some skill (beat an opponent in a player match by 50+ points). I know I'll acquire the bragging rights behind these last two soon enough. Once I do I will continue playing this game because it is lite and fun.