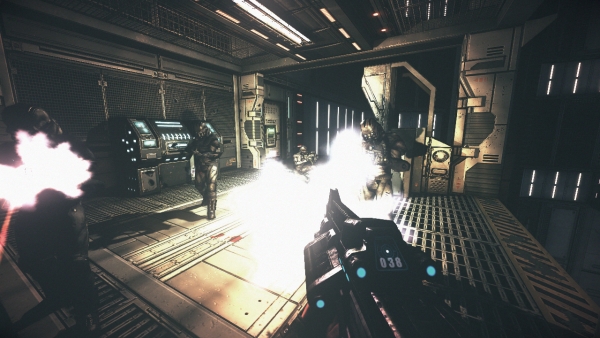 Sweden-based Starbreeze Studios have created an exciting and original multiplayer component in The Chronicles of Riddick: Assault on Dark Athena.  Throughout the development of the game, the team held daily multiplayer sessions which have ensured a high level of polish to the experience and also given birth to two unique multiplayer gameplay modes.  The game features six multiplayer modes, detailed below.

Of the six multiplayer modes in the game, two are original and unique to the title:

Pitch Black
This mode will capture players’ attention, as it is easy to learn and offers an experience unlike traditional MP modes with a nerve-wracking stealth hunt through the darkness. It’s a 6 player mode on all maps, where 5 players take the role of Mercenaries trying to hunt down and kill Riddick across levels swathed in darkness, with only weapon-mounted flashlights to see by. Riddick starts in the darkness, while the Mercenaries start in a lit room containing shotguns, SMG’s and Assault Rifles before dropping into the darkness to hunt Riddick down. The more powerful the Mercenaries’ weapons, the lower the power of the flashlight. Riddick is armed with the Ulaks and his unique eyeshine night vision which gives him a great advantage in the dark. The player that kills Riddick then becomes him for the following round.

Butcher Bay Riot
This is a fast paced three team mode, in which 12 players split into teams of Guards, Prisoners and Mercenaries fight over a power cell. Each team has to take the power cell to the base of one of the opposing teams to win the round (the match can be won in either 3 or 5 rounds depending on settings).  Players buy weapons before the round starts and winning rewards them with more cash, as does killing the opposing players. All weapons are available to be purchased and all maps support 12 players.  This mode requires close team collaboration and demands more strategic and tactical gameplay than the other multiplayer modes.

The four classic modes are:

Death Match
All against all with weapons, ammo and power-ups are scattered around the levels. Some of the most powerful weapons are reserved only for the larger levels in order to balance the smaller ones and Ulaks are not available. Supports up to 12 players except for some smaller maps which support 4-8 players.

Team Death Match
As Death Match, but the players are split up into red and blue teams. Supports up to 12 players, but certain maps are designed for smaller teams (as with Death Match).

Capture the Flag
Competing Red and Blue teams try to penetrate their opponent’s base and take their flag. Weapons, ammo and power-ups are distributed in a similar way to Death Match, but with additional unique maps as well as some Death Match maps. Supports up to 12 players, but some maps are for smaller teams (as with Death Match).

Arena
Either 1 vs. 1 or teams of 2 vs. 2 (default setting is 2 vs. 2 but can be changed in advanced options) . The winning team or individual stays on. All weapons are in the players inventory when the game is started. Supports up to 8 players. 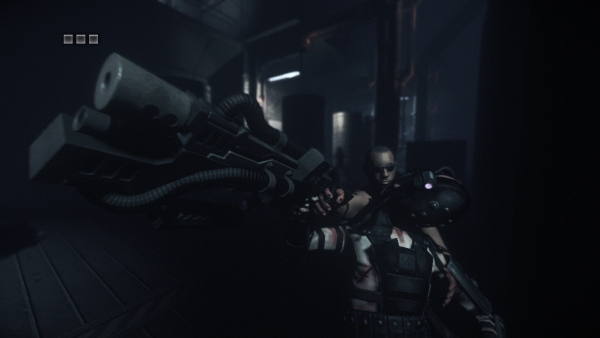 Supporting the inimitable Vin Diesel in his role as the galaxy’s most hard-ass criminal is a highly talented cast of seasoned actors who lend their voices to the rogues gallery of believable and memorable characters aboard the predatory Merc-ship Dark Athena.

The self-confessed Dungeons & Dragons fan first stepped into Riddick’s shoes in cult hit film Pitch Black, which is honoured with a multiplayer mode of the same name in Assault on Dark Athena.  Diesel found the shoes a good fit and subsequently starred in the film The Chronicles of Riddick and lent his voice to the acclaimed game Escape from Butcher Bay.  Riddick is renowned as the toughest criminal in the galaxy – a man who walks a moral knife edge and isn’t shy of getting blood on his hands.

A versatile character actor equally at home playing blood-thirsty vampires or beaten-down detectives, Lance Henriksen made his intense presence felt early on with appearances in timeless big screen blockbusters Close Encounters of the Third Kind, The Terminator and Aliens.  He brings the weight of his voice to bear on Assault on Dark Athena playing Dacher, a prisoner on the ship who shares part of his harrowing life story with Riddick and comes to his aid as the plot unfolds.

The Texan-born actress is known for playing tough women, a skill which has seen her take major roles in a series of acclaimed TV shows including Battlestar Galactica, Prison Break, 24, and Star Trek: The Next Generation.  Her unforgettable performance as Revas, the captain of the Merc-ship Dark Athena who shares a chequered past with Riddick, brings depth and a weary malevolence to the character.


Williams has appeared in numerous top-rated TV series including CSI, 24, Six Feet Under, Buffy the Vampire Slayer, and most prominently Prison Break in which he played Bradley 'Brad' Bellick from 2005-2008. In Assault on Dark Athena Williams takes the role of Spinner, the loyal right-hand man of ship’s captain Revas, who is charged with holding the ship together while Riddick unleashes chaos.

The accomplished, British-born actor has made numerous appearances on stage and screen since the 1960’s including most recently 2007’s Transformers film, with an appearance slated in the forthcoming Star Trek movie.  Following his voice work on 2004’s Escape from Butcher Bay, Sheppard returns to the Riddick universe lending his voice to the character Pavlo, a schizophrenic prisoner trapped aboard Dark Athena who brings clarity and confusion to Riddick in equal doses.

The demo on Xbox Live is short, real short. Just when I started getting into the game it ended. That is both good and bad. It's good in that the game was able to draw me in quickly but it is bad in that I don't think I learned enough to know the game. With that said let me tell you my thoughts on the game.

I found the controls to be very good and inline with most FPS games out there. When something can be manipulated or used on screen a small image of the button to press and what it does will appear on screen. I find this very helpful due in large part to the dark lighting of this game. Nothing worse than standing over or near something and not knowing if it is part of the scenery or something you are meant to manipulate.

Taking over drones was a blast (literally)! Nothing better than remotely controlling a body with a gun and walking around dealing destruction while you are safely hidden away behind a big heavy door. This is the kind of fun usually reserved for the CPU player.

Even after your last drone lies dead on the floor the fun of using drones is not over. If you are standing over the body of a dead drone you can use their gun and shoot other enemies nearby. You can even drag the body with you so that you can keep using the drone's gun.

Above all else this is a stealth game more than it is an FPS game. A lot of trouble can be avoided if you hide the bodies after you dispatch them.

I have not been able to test out the multi-player aspect of the game but what I played in the single player demo was fun. Between that fun (and my own love of the Riddick character) I have this game on my buy list for 2009.