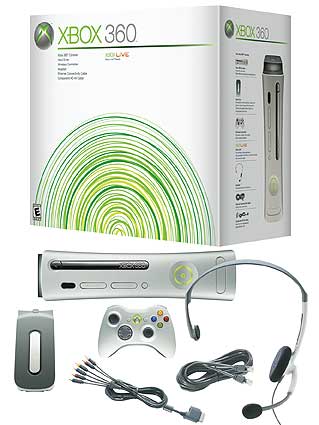 I know what you are thinking, "how can a price drop on the Elite and Pro make the Arcade the most expensive?" As with most things it's not just what you get but what you have to pay for.

Let's do a little bit of a comparison of each of the three versions of the Xbox360.

On the surface the Arcade is the cheapest version of the Xbox360 to buy but it will cost you the most in the long run in not only money but also fun.

According to Microsoft the Arcade only works with Xbox 360 games while the Elite and Pro will work with over 300+ Xbox games. This might not be a big deal for you but as a long time gamer even I still have some of my old consoles because of one or two games I like to play. I never owned a previous generation Xbox so I like knowing that I can play those older games on my Xbox 360 (For the record I own a 20GB Xbox 360 Pro).

How much is that hard drive going to cost you? Now that the Pro version (60GB hard drive) is being discontinued your only option for adding a hard drive is the 120GB one. A drive that will set you back a whopping $149.99! If you are lucky you might be able to find an older 60GB drive at a local store for about $99.

Yes, for more than $1 per GB you can buy a hard drive for your Arcade edition of the Xbox 360. When you count only the drive you are looking at your Arcade version now costing you about $350 or $50 more than the Elite.

The sad thing about the hard drive issue is that large drives are dirt cheap these days. There is no reason for MS to be charging $149.99 for a 120GB drive. You can buy a 320GB external hard drive for your computer for less than $99 these days. Before you get the bright idea to buy one of those and swap it out with the 120GB drive sold by Microsoft you might want to remember that MS has no problem kicking people off of Xbox Live for doing that.

In the end it is up to you but without Xbox Live and a hard drive the Arcade level of the Xbox 360 is a complete waste of money. You wouldn't buy a Ferrari with a 4 cylinder engine so why buy an Xbox 360 without a hard drive?'