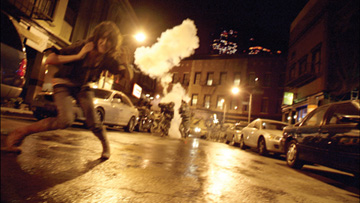 For months now I have been looking forward to the monster movie Cloverfield. I've seen the trailers, read the press reports and been generally upbeat about seeing it. No more.

The sad thing is that Cloverfield is a movie that I want to see. It is right up my alley. I love monster movies that follow the path set by Godzilla and his ilk.

I remember, back when I was a kid, sitting in front of the TV on Saturdays for the "Creature Double Feature". My brother even had the Godzilla with the flicking tongue and the fists that would fly through the air. Yeah, that Godzilla is still around even though he became a double-amputee years ago.

So, why am I not going to see Cloverfield? Shaky-cam.

Yes, Cloverfield is filmed in the horrible Blair Witch style of a guy running around with a camcorder. I have enough problems with FPS video games do you think I can spend 90 minutes in a theatre watching the horizon go all willy nilly as if some four year old was making a movie? Why I'd be puking my guts out inside of ten minutes!

I understand the "feel" the director was going for in using this technique but, you know what? Sometimes you lose audience when you use weird camera tricks in your movie making.

So, if you decide to go and see the movie by all means, enjoy it. I'll be home, yelling at my Wii as the camera angles change in the middle of a jump while playing Super Mario Galaxy.