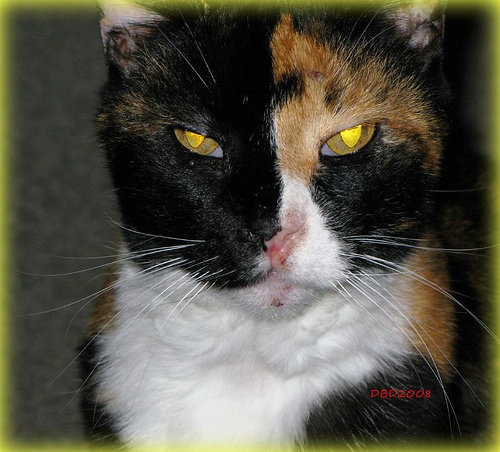 Today we say goodbye to one of our cats, Byter. She was about 19 and lived a long, full life.

My wife had the Byter before we were married. Originally names Sassafras or Sassy for short she grew into the name Byter by way of her actions. She grew to like that name and responded to it when called.

Byter was quite the cat.

Though she never had any kittens of her own whenever we brought kittens into the house she would cozy up to them and treat them like her own. I have a ton of pictures of the Byter curled up on a bed or chair with a new kitten. I also have some pictures of her fighting with those kittens once they grew into cats. I guess even cats rebel against their parents after a certain age?

Byter was a big eater throughout most of her life. When my wife got her she had to be fed baby food because she was a little on the young side. A few weeks ago my wife had to feed her baby food again due to a sickness she was suffering through.

Even though she was old and walked with a little bit of a limp she seemed to be in good spirits. she had a shelf in the bathroom that she would sleep on and a special tree in the yard where she would laze away the day. It is under that tree where she will rest.

Byter was a good cat, she will be missed.