After I posted the article last week with the chart of console sales synced by release date I got to thinking. We now know that the PS3 is not doing as badly as some in the video game media like to report. I'm not about to go into some sort of conspiracy theory that suggests Microsoft is paying off tech reporters. Instead I will post some more charts and let them speak for themselves. As before, these charts come from VGChartz 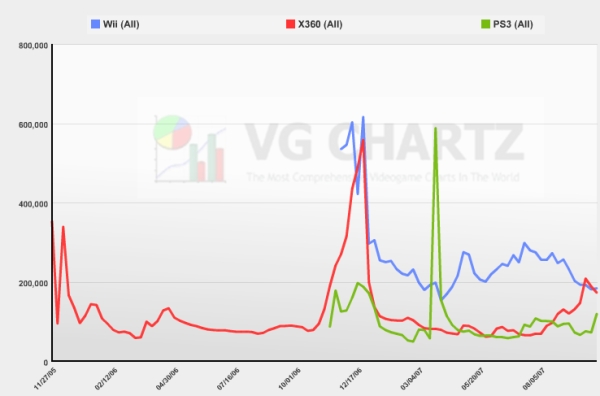 The above chart has some interesting data in it. As good as Wii sales have been the console has had its share of ups and downs. In fact the two biggest dips in the chart for the Wii coincide with increased sales for the PS3 and the Xbox 360. I'm not sure what happened with the PS3 to give it numbers similar to the Wii's launch but it did see a huge spike back in March of '07. More recently the spike in Xbox 360 sales coincided with a dip in Wii sales. Keep in mind that the Wii routinely sells more than 200K units every month and that a "bad" month for the Wii is still a better month than the other two combined. 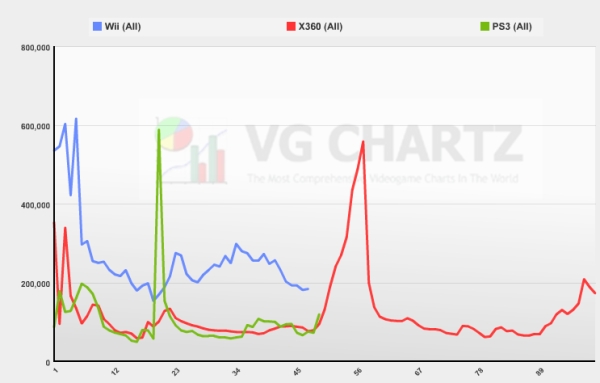 Now when we sync the charts by release date we see something even more interesting. All of the consoles follow a similar waveform. The only anomaly is that huge spike in PS3 sales. Even the Wii has a similar waveform (just a higher one) to the other two. However, that big flat portion on the 360 chart occurred over the summer months. The PS3 saw a similar sales rate over the summer months but not the Wii. The Wii saw sales increase at the same time the other systems remained flat.

We are heading into the holiday shopping season and the PS3 has just received a price cut that makes their system even more attractive. $499 for an 80GB PS3? Some might think that is still too much but don't forget that in order to get the HD-DVD player on the 360 you have to buy a 360 AND an HD-DVD drive. when you figure that little nugget in the PS3 sounds even better.

Either way we are heading into Video Game Crunch Season. Black Thursday is only a month away and news is already circulating that Microsoft is cutting the price on the 360 in Japan by 13%! Microsoft has just fired off their main gun with the release of Halo 3 while Nintendo is getting ready to launch Super Mario Galaxy after announcing that they were pushing back the release of Super Smash Bros. Brawl (those bastards!!!). I'm not sure what games Sony has planned but I'm sure they have something ready to take advantage of the holidays and the price cut.

So, which one will you be buying or playing?