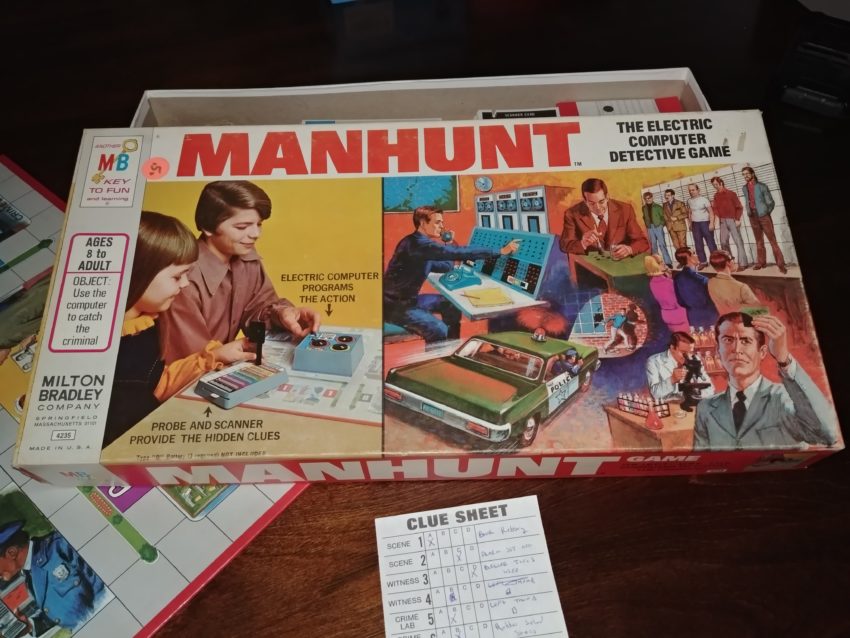 This evening my wife and I were looking for something to do. Inspired by a recent binge watching of Mindhunter on Netflix, I decided to pull this classic from 1972 out of the closet.

After pulling out the game board, getting the computer ready, and deciding on whether to investigate a murder, robbery, or swindling, we were ready to play. We decided to go with a robbery.

All players start out by investigating locations one and two. After that, you are free to go to any other location. Movement is based on the computer dial and runs from one to six. When you land on a space you use the computer and check the yellow dial to see if the scanner is off-line or on-line. If it is on-line you can investigate the location for clues. If not, you end your turn.

When you investigate a location you put a special probe into each hole in the given row. If you don't see the red dot then that is the clue. Each row only ever has one clue though the punch cards are designed with false holes so that you can't easily guess anything by looking at the punch card during setup. As you play the game you use your detective handbook and the "Read Out" booklet to narrow down the list of possible culprits.

There is another way to get clues that involves the other players. If you end your turn on the same space as another player you get to talk to them. The same goes for landing on a badge or HQ space, though that one allows you to move ANY player on the board to your space.

Once you are both on the same space you use the red dial on the computer to see if the meetup is a 'Receive' (you get to see their answers on one row between three and eight) or a 'Broadcast' (They get to pick a row from you!) Because of this it can be a gamble in the late game. Although, sometimes it is worth it if you land on an HQ space and they are about to get their final clue!

I wish I could say I won the game but that would be a lie. My wife kicked my butt and figured out the culprit while I was down to three suspects!

We had a lot of fun with this one and will certainly play it again. With 16 punch cards and three different types of crimes this game can be replayed at least 48 times!

A quick note for those who might have a copy of this game or who have enough luck to find a copy on the secondary market. The 'electric computer' part of the game is a battery powered (D Cell) gear box with three spinners on it. You turn a switch that closes a circuit which powers a small motor. Mine had a fair amount of verdigris on it and did not work. After about ten minutes of tearing it down and cleaning it up it worked mostly fine. I had to bend the metal bar that completes the circuit, but it worked.