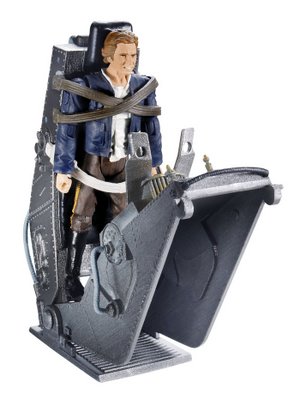 I was out shopping with my daughter today and I ran into this in the toy store. The Han Solo Torture set?

What the heck is Hasbro thinking these days? Putting the poor guy in carbonite (that was a whole play set) was bad enough but now this?

Look at his face, it looks like he is smiling! What kind of torture device makes a guy smile? My only guess is that Hasbro was not able to take the time to make a Han Solo figure with pain on his face so they just re-purposed an earlier model. Kind of like when they took the muscle-bound Han and Luke figures and put them in those over-sized mech outfits.

You know what the little kids will do with this thing once they get their hands on it? They will remove Han Solo and put that annoying Anakin figure in there.

Let me take you to a little boy's bedroom, in a house nearby. I can hear the dialogue now...

Kid "Why did you have to be such a girly-man?"
Anakin "It was Lucas, he made me this way!"
Kid "I can't believe you become Vader, you don't even sound like him."
Anakin "That was just a voice actor, a big white guy was inside the suit."
Kid "Now you will pay for ruining the Star Wars movies..."
Anakin "AAAAIIIIGGGGHHHHHHHHHH!!!!!!!"