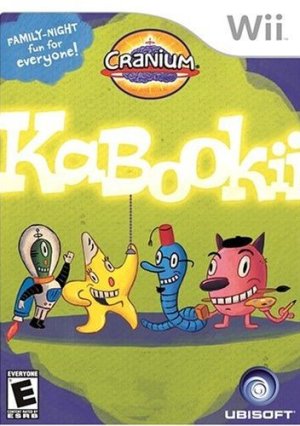 This week is school vacation week for us. This means my daughter is off all week long. Being the good father that I am I also took the week off from work so I could be sure to spend some quality time fighting with my daughter.

Because I work nights I don't get a lot of time to fight with my kid during the week. As Italians we need a certain amount of fighting and yelling to keep our relationship intact. Yelling in Italian families is second only to talking with our hands in regards to communicating.

Today we invited a friend and her three daughters over. I knew they would eventually tire of playing outside so I picked up a copy of the Ubisoft Wii family party game Cranium Kabookii.

Our family has many of the games in the Cranium family of board game form and this one looked like a Wii version of those great games. With no board to knock around or pieces to lose I figured it would be a good match-up for our group.

Unlike many Wii games this game requires a minimum of four players (two teams of two). The game can support as many as four teams per game. This is because some of the games require one team member to do something (draw, paint, etc...) while the other members of the team guess what that member is trying to get across.

The four main characters from the board game return and we have: 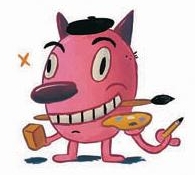 For these games you will have one team member draw something on the screen while the other members of the team must try and guess what it is. There is a special set of red glasses you wear that allows you to read the word on screen while the rest of the players see only a mismatch of colors.

The spray paint game allows you to change colors. The chalk game is similar to the standard method in the board game of drawing with a pencil. The disappearing ink is like the chalk game but the ink slowly disappears as you draw with it.

This grouping of games is mostly a test of knowledge. Can you find Bolivia on a globe? What about Luxembourg?

The Data Head grouping of games are all about testing your knowledge of facts from the world outside your home. Some of the games are multiple choice while others are not.

Everyone's favorite from the board game has to be this one.

Can you act out the word so your teammates can guess it? Can you memorize a musical pattern and repeat it? All of these (and more) fall into this category of games.

Word Worm: CRACK CODES and remix phrases.
The games in Word Worm all require the players have a decent vocabulary (and a little bit of trivia knowledge).

Some of the puzzles are as simple as unscrambling a word (or phrase) while others have you spinning an object that looks like the puzzle tube from the Davinci Code! Another mini game has you moving lines to form the letters the answer the question. That last one requires a good bit of hand-eye coordination.

Now that you know a little bit about the games involved let me take a moment to introduce you to the one extra item included with the game; the glasses. 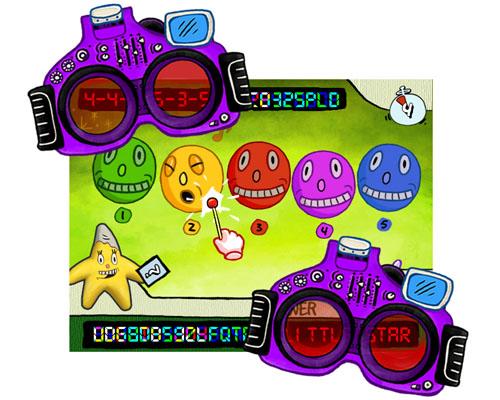 Click to Enlarge
If you were creating a game and wanted to share information with only some players how would you go about doing it? One way would be to utilize the Nintendo DS as a controller but that would be very expensive for the consumer. The folks at Ubisoft took a page from Cranium's playbook and included a pair of red decoder glasses in the box with the game. By looking through the red-tinted lens you can easily read the hidden word on the screen.

This system works very well but there were a few times when I was able to decipher the hidden word without the use of the glasses. Part of the problem is that the hidden word is often only hidden in a box of text as long as the word. Four letter word equals four letter scramble box. Eight letter word equals eight letter scramble box. It's a minor thing and most of the kids will not figure it out. Not sure how this will affect those who are color blind. 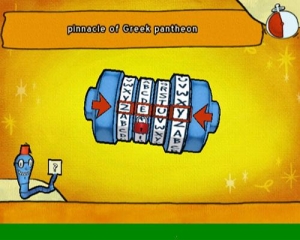 Remember when I mentioned the Davinci Code above? Well here is the code cylinder. To do this game you hold the Wii-mote sideways like a code wheel. You tilt it left or right to change which wheel you want to spin. You then tile it forwards or backwards to spin the wheels.

On short words you will typically have one letter locked to aid you in guessing the answer. Longer words have more letters locked. The clues tend to be somewhat generic and we had some problems on some of the games because of this.

Yes, the Zeus puzzle did come up when we played.

When you start the game you are shown an introduction screen which allows you set the region you want to play in. Aside form selecting a foreign language this page also has several options for English speakers. Realizing that the English-speaking people of America are sometimes linguistically different that their Canadian and British counterparts Ubisoft lists several English-speaking options to choose from. We picked the American option.

The problem we encountered is that a number of the word games involved words that our kids would not know. On one puzzle (the answer was 'Mary') two of the clues were 'Bloody' and 'Hail'. even though I'm running at 480P (upscalled to 1080P) I thought the second word was 'Hall'. Yeah we got that one wrong. After we saw the answer my wife and I looked at each other and wondered why that one was in the game.

There was also a trivia question asking which of four people were not on the Sgt Pepper album cover. I don't know about your kids but my kids don't even know who the Beatles are, let alone who the people listed were. My wife and I did not even know half the names offered. Yes, we got that one wrong. Turned out to be Ghandi who was removed by EMI.

The point is that this is marketed as a family game but some of the questions are above the heads of the kids who will be playing it. I don't know about your kids but my daughter does not like to lose, even more so when she loses because she encounters a question about something she has never been exposed to.

The game is good and worth the $30 price tag if you have kids that are over the age of ten. Heck, bring this game to the next kegger you attend at the frat house. After a few beers those drawing games will get mighty hard. Not too mention the memory games!

If you have a Wii and like the Cranium games you will like this. Just be sure to include some older family members when you play.