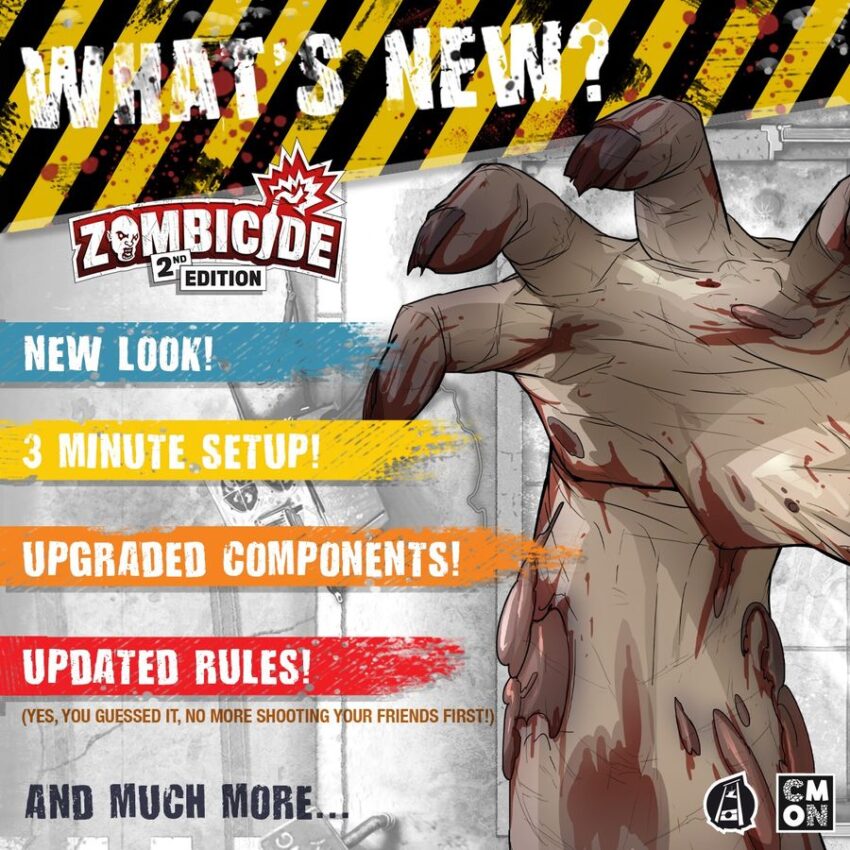 As a gamer of a certain financial level I often keep an eye on publishers latest KickStarter offerings. I do not pledge to a lot of Kickstarters but certain game publishers have a bad habit of overloading their KS campaigns to the eventual detriment of retailers and late arrivals. Zombicide is one such product.

The original game was published via Kickstarter almost a decade ago and it has seen many expansions with the core experience often referred to as "Moderncide" to differentiate it from the reskins. After the success of the first game it was rebranded as Season 1 with two additional seasons launching on Kickstarter. The first was Season 2: Prison Outbreak which was followed by Season 3: Rue Morgue. I have personally acquired all of the Zombicide games aside from the Science Fiction themed Zombicide: Invader.

The original version of the game presented a simple d6 zombie killing system. As you killed zombies you gained power and as you gained power the zombies would appear in greater numbers. The basic walker zombie formed the bulk of the zombie forces followed by the tougher fatties, faster runners, and the extremely hard to kill abomination.

The expansions added toxic (corrosive blood spray on melee kills), berserker (immune to ranged attacks), skinners (can spawn as a crawler on death), seekers (constant extra activations), crows (flying and fast), and zombie dogs (faster than runners!) Each expansion also had its own theme flavorings added to the scenarios as well as being stand alone games in their own right.

I came late to the Zombicide party, right after Season 3: Rue Morgue hit retail. I was able to pick up some of the earlier products via eBay, Amazon and Facebook groups. Some of the Kickstarter exclusives (also available at the CMON convention booth) are extremely difficult to find regardless of the inflated secondary market prices. However, most of those are just extra survivors to play and the figures can easily be proxied.

When Zombicide 2.0 was announced a year ago I jumped at the chance to get in on the reboot of the Moderncide franchise. It would give me a chance to get everything in one fell swoop, as I had done with the Black Plague version. I ended up backing everything except for the RPG content. When it finally arrived a week ago I dove right in to see what improvements were made to the game.

So far we have played about five games using the new 2.0 rules and the survivors from the core game. We typically play with a mixture of adult and child survivors. We have not added anything outside of the core box.

Setup is a breeze. Doors are only placed on the map when they are opened and every tile gets a pimp weapon crate and an objective token. One spawn point is designated as the primary so there is never a question of what order to spawn zombies.

The game plays nearly identical to the original, most changes are fixes that the community has long asked for. We didn't fail any of the scenarios we played though we did come close. Some of the core survivors have had their skills changed with this new version. Wanda no longer moves two spaces whenever she moves, instead she has a single sprint action she can take to move up to three zones as an action.

The child survivors have very useful skill combinations and the once-per-turn slippery skill offsets the drop in wounds. If the child survivors were not as good as the adult ones we wouldn't be playing with them. Although one of the adult survivors (Phil is gone) has a child face and we often confuse it for a child.

We have not tried the campaign add-ons yet or any of their rules changes (no all-out or night time) because we wanted to get the core gameplay under control and bonus survivors tend to be extremely over powered.

The new rules are a great refresh for Moderncide without being too different from the original. An update card pack was available with the Kickstarter to allow you to use all the zombie types from the 1.0 system. There was a reboot pledge designed to allow you to use your old materials but the tiles from 1.0 are not compatible with 2.0.

We genuinely enjoy playing the game and look forward to trying out the campaigns. The abundance of pimp weapon crates makes gearing up a lot easier and the objective tokens being worth 5 AP means you need to carefully plan who grabs them lest you end up with one survivor careening into yellow (or orange) while others are still in blue.

If you can pick up a copy of the core game you will have hours of fun.

You can check out the rulebook here.