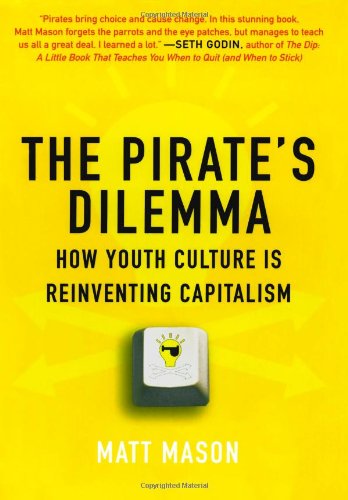 I have recently been reading an excellent book by Matt Mason titled The Pirate's Dilemma. This book talks about how youth culture is reinventing capitalism.

The book is very well written and researched. The core theme behind the book is how the culture of piracy (that's you and me) causes change in the capitalist world. While entrepreneurs expand existing markets Pirates create new markets. It is then up to the established businesses to decide whether or not to compete or destroy the Pirates.

For example, should a designer hand bag company try to compete with a knock-off manufacturer? If the designer bags sell for $2,000 each and the knock-offs sell for $25 then the company is better served having law enforcement shut down the counterfeiters because the clientele who can afford a $2,000 handbag are unlikely to be willing to purchase a knock-off.

Another good example is made in regards to the RIAA and file sharing. We all know how that is turning out. The only one who is making money in the digital music space is Apple because they launched iTunes to compete (rather than litigate) the competition.

This article is not going to focus on the entire book but on one small section found in chapter 5. In this chapter (on page 167) Matt Mason lists The Four Pillars of Community. The text is written to apply to open source systems but it can be read to also apply to social media. After all, is Digg not the epitome of open source news? Many users contribute to make the site work, without those members contributing content what would Digg be?

Pillar 1: Altruism - Inspire your Audience to Help You Start Something.

When Digg began it was all about getting great content on the site. Back then it was strictly a tech site and the user base consisted of a large following that came from Kevin Rose's days on TechTV.

Kevin had a vision. He wanted to harness the Wisdom of Crowds for the purpose of spreading great content to a multitude of users all over the web. If there was a money making system at work no one saw it back then. Many members wanted to see Digg succeed because they felt it was the wave of the future, putting the power of the media back into the hands of the common man.

MegaDeth had a song in the 80's, "Peace Sells, But Who's Buying?" Even the most altruistic of people like to have a modicum of recognition for their deeds. Many Internet forums are run by volunteer administrators. They do not do it for pay they do it as they see personal value in it. Having the title of admin on some forums gives you a title equivalent to King or Queen. It is something you have earned and others respect.

Between the top digs users list and the DiggNation podcast Rose and company offered a valid reward system to get members involved; fame.

Many of the top Diggers on the site grew to have followings. They became social news celebrities in their own right. Becoming a top Digger was not something that was handed to you. Oh no, it is something that you had to work your ass off to achieve.

Pillar 3: Experience - Give Your Audience a New Experience and the Chance to Improve Their Skills.

Not all users of Digg are in it for the fame. Some of them just want to learn a thing or two about how social media works.

I know, from my own personal experience, that my involvement in Digg has been rewarding because I have met many new friends. People I would have never met outside of Digg are now people that I can call friends.

Not only have I met new people but I have also been able to debate my ideals and sway others (or been swayed myself) all because of Digg. Outside of home, work and my small circle of local friends I do not encounter many people who do not share my ideals and way of looking at things. Thanks to Digg (at least in the early days) I was able to learn things that have changed my point of view on various subjects.

I have found myself to be a better writer and debater because of the time I have spent on Digg.

I am not talking about cash money here (wouldn't that be nice!) but about paying back the Digg user base for, without them, Digg is nothing.

Digg does still give back in the form of the DiggNation podcast but, they dropped the top Digger list. Not only have they dropped the list but they have turned the site upside down by making harder for the top Diggers to stay in the game. They have created an un-level playing field by forcing the more popular members to acquire more Diggs on a story before it gets promoted to the front page.

I understand that Digg wants to attract new members but what about all those people who made Digg big in the first place? If I, as a new user, am told that I am only welcome to submit content to the site until I hit a certain popularity threshold than why should I invest any time at all into the site? Digg is effectively telling me that they are scared of influential members using the site.

I can't help but think that Digg was once built on all four of these pillars and doing very well for itself. They were the Pirates of social media. They created a whole new business and it flourished like a wildfire. Then, something happened. They sold out.

By selling out I mean that in the literal not figurative sense. It is no secret that Digg is looking for a buyer right now. No one wants to invest a large sum of money into a business that is based on the whim of a few users, a few users who control what appears on the site due to their massive following. Because of this change in direction Digg has been forced to go from being a free-wheeling Pirate-style site to a suit and tie corporate entity.

Digg can succeed but I fear it may be destroyed if it is sold. Digg may have been first to market but it is no longer alone. Apple was not the first one to market with MP3 players yet they dominate the MP3 player market today.

Digg IS Kevin Rose. It was built on his ideas and the more it seems that he is removing himself from the ideals behind the site the more its users grow nervous. The only way Digg can survive being sold is if it sets its foundation firmly back onto the four pillars mentioned above.

I was recently contacted by David Title who has posted an interview with Matt Mason on his blog.