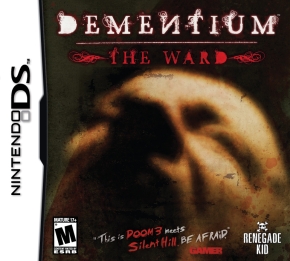 The cover of Dementium: The Ward quotes Hardcore Gamer Magazine as saying that the game is Doom 3 meets Silent Hill. Be afraid. My first thought after reading that quote was, So I should be afraid because it's filled with cheap thrills and crappy controls? I mean really, Resident Evil taught me that personal horror usually means your game experience will be personally horrible due to garbage camera angles and wonky controls.

My brother bought me Gamecock's (say that with a straight face) Dementium: The Ward for my birthday. Before I continue this little review one thing must be noted: this game should only be played in the dark and this review is written with that in mind. Playing the game during the day defeats the purpose and will most certainly lessen the creep-factor. Another thing to keep in mind is that I don't give a shit about any other reviews written about the game. I knew most gamers and I had different views on gaming the day I said Halo sucked and the rest of the gaming community cried like little fan-girls. P.S.: Halo still sucks. Eat that Microsoft. 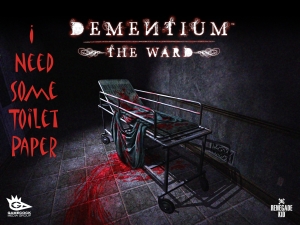 Alright, so about Dementium: the Ward. After a creepy (albeit typical) intro you wake up in an abandoned, blood-soaked hospital that walked straight out of Silent Hill or the Suffering. It looks like someone decided to use an old mental hospital as an abattoir, there's so much blood, and all you have to begin with is your bare hands and the hospital gown you're pimpin' (presumably why you can't hold ammo or health replenishment). Thankfully you'll find a flashlight and a baton a few minutes into the game.

Keep this in mind should you decide to play the game: the initial draw distance is supposed to be that limited and it isn't just because the graphics suck that bad or anything. That was my initial thought on the game: I can only see five feet ahead because the DS can't handle anything beyond that. But the flashlight proves that mofo wrong. Suddenly you can see quite far (try beaming it over the side of the roof or walkways between the buildings and you'll see), although you can't use your flashlight and handgun at the same time (Holy shit, it really is like Doom 3!), so when you use ANY weapon the draw distance drops back down to nothing. Thus begins your excursion into the madness of well wherever the hell you're supposed to be. I dunno. Who gives a shit? It's bloody, creepy and filled with zombies. That's good enough for me. 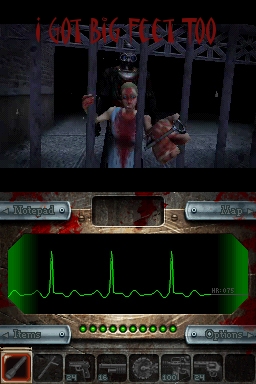 The top screen of the DS is where the action takes place. This is where you see the game through your character's eyes in the classic FPS viewpoint. Nothing else clutters the screen (i.e. No UI) here so it's all business up top. The bottom touch-sensitive screen is where the party is at. This is where it all goes down. You'll use the stylus to look around while the d-pad moves forward, back, and strafes left and right. Besides the boss battles this isn't a bad set-up and it actually works rather well in most situations, since the d-pad works like the W-A-S-D set up on a keyboard and the stylus works like a mouse.

In addition to moving the camera, the touch screen also features a few important buttons. For example, in the upper right is the button to click open your map, while the upper left opens your notepad (which you write in with the stylus, much like Hotel Dusk featured). Along the bottom is a strip that shows your inventory, allowing you to switch between your flashlight and your weapons with one flick of the stylus; this is cool in theory but can be annoying in practice since you have to look away from the action to click the teeny-weeny little icon for whatever it is you want to use. This can get you killed.

Your health is also shown on this screen in an oddly redundant manner in addition to little health dots showing your health you also have those heart monitor thingy uh things you know what I mean. The things in the ER that show when you flat line. Christ I'm retarded. I don't know the name for them. Whatever. This thing changes from green to yellow to red depending on how hurt you are. Sound familiar? <cough>ResidentEvil<cough> Add in buttons for the quest item inventory and game options and that's what's going on this cluttered screen. So yes, since this is used for moving the camera you will accidentally open a menu when all you wanted to do was look up or dodge something. Why weren't these things assigned to the unused buttons instead of put on your mouse screen? 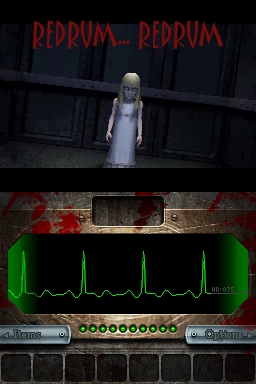 On to the pros and cons of the game! 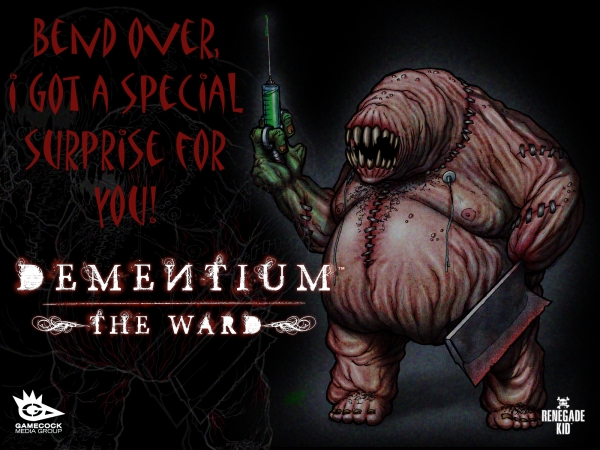 The cons look to outweigh the pros, but I'd still rate this bad boy at a 6 out of 10. So it's decent and has its moments where it's awesome. My biggest beef is the clutter of the stylus screen followed by the annoying boss fights. Over all the game looks pretty good (again, for the DS this would be garbage on the PSP) and it can get pretty creepy at times, especially if you play in the dark. More to the point, the game showcases that the DS is capable of doing survival horror games.

This game could have been 9,051 times better if they moved the notepad, map, options and inventory buttons off of the stylus screen and on to the A, B, X and Y buttons. They don't come up in any critical moments where you'd need the stylus to use them, so assigning them buttons would have worked fine. And the empty upper RIGHT button could have done to a quick change between your flashlight and handgun or the handgun to the shotgun, just so that combat could go a little smoother. So the game is far from perfect, but fans of games like Silent Hill or Fatal Frame might appreciate this game enough to warrant owning it and other people might want to borrow a copy and play through in an evening or two. And when I wasn't fighting bosses I had a blast playing the game.

To bring this review full circle, the game does indeed have wonky controls at times and it does use cheap thrills, but it isn't a constant thing. Hardcore Gamer Magazine wasn't too far off the mark.