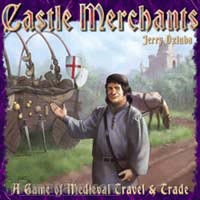 All right, I'll be honest; when I first read through the rules of Castle Merchants (Z-Man Games, 2005 - Jerry Dziuba), I was less than impressed. Moving goods around from castle to castle really sounded like a drab affair, even though I heard that the game was an excellent "gateway" game. Armed with this information, I introduced the game to some new players and waited to see the reaction. The game has elements of a racing game, and I was curious to see how it tied together with the theme.

And to my surprise, the game went over quite well. In the beginning of the game, I was a little concerned about the amount of luck, and the low amount of actions a player could take on their turn. Yet, over the course of the games I've played, I've seen people get amazing mileage out of their cards, laugh as they messed over someone else, and most importantly, have a lot of fun. The level of interaction is high, and players can pull off some nifty combos. The strategy is not overwhelming, as players basically have to deal with the cards they draw; but forward planning is possible, and the game is much more than luck.

Each player is given a reference card that also acts as their "cart" - on which they place one each of five different goods (cheese, jewels, weapons, cloth, and wine). Each player also receives two to four rock slide tiles, depending on how many players are playing; and the rest of the path tiles (castle path, village path, mountain path, field path, forest path, and rock slide) are placed next to the board in sorted piles - each pile corresponding with one number of a six-sided die. A board is placed on the table made up of a grid of hexagonal spaces, connecting five Castles and a Warehouse, where each player places a pawn of their color. Each Castle corresponds to one of the five goods that players are delivering and has a number of gold coins placed in them according to a table on the board (gold coins are valued from "1" to "5"). A deck of sixty path cards that correspond to the path tiles is shuffled, with six dealt to each player. One player is chosen to go first, and then play proceeds clockwise around the table.

On a player's turn, they have two options. They can either play one rock slide tile onto any space on the board, causing that space to be impassible, then draw one card. Or, they can play cards to take actions (and also play one rock slide tile, if they wish). The actions they can take are these (actions can be taken multiple times, if a player wishes):
- Play a card to place a matching path tile onto any empty space on the board.
- Play a card to move their pawn onto a path tile that matches the card played. Players may move along multiple path tiles if they are all the same type.
- Play any two cards to remove a path tile from the board.
- Play any two cards to roll a six-sided die. They may then remove a tile that matches that number from the board, rearrange one tile of that type - moving it to a different space, or add one more tile to the board of that type.
Once a player has taken the actions they wish, they draw up to three cards to refill their hand, keeping to the six card hand limit.

If a player moves into a castle, using any type of card, they may sell the ware that castle desires, placing it back in the warehouse, and take the highest gold coin still in that castle. This ends a player's turn. A player can also opt to not take a gold coin, instead, refilling their hand to six cards. If a player moves into the "meadow" (central hex), they can stop and draw up to six cards. A player can also do that if they enter the warehouse, as well as refill any goods that they may have sold already. Players continue to move around the board and sell goods until one player equals or exceeds eighteen gold - at which point they are declared the winner!

1.) Components: I enjoy the layout of the game, and it has nice, functional components. That being said, the components were a little less than I have come to expect from modern games, with the round terrain tiles being thinner than I would like, and having only a plain white back. The pawns and die were also rather generic; although once the game got going, I didn't really care too much. The board, however, is very nicely done - with nice graphics - and even has a scoring track around the outside for those who can't count their gold pieces. It is a bit odd to see a castle that is constantly on the lookout for cheese, but I do understand the urge for wanting that fine cuisine. Everything very easily fits inside the large square box - almost rattling around inside.

2.) Rules: The four page rulebook is very clear on exactly how to play the game with a full page example of how to play the game. I will say that from the initial reading, I quickly understood the mechanics of the game and how to play but didn't grasp the overall picture - the fact that the game is basically a race. When I explain it to others that way, the entire concept is much easier to assimilate, and I have no problem at all. The artwork, reference cards, and board all lend themselves to understanding the game; and I had very few questions when teaching it - even to teenagers.

3.) Race: As stated above, the game is basically a race. Yes, it's not a race in the typical meaning of the word; but as you quickly attempt to get your caravan around the board and grab gold, the player who does this the fastest will be the winner. The game is all about speed and borrows a clever mechanic from Odin's Ravens by allowing a player to treat adjacent, equivalent terrain as one space. This means that if a player can set themselves up a nice path then can quickly zoom down it with only a few cards. Players will most likely have to go back to the warehouse at least once on their journey; and must decide whether or not it is more profitable to run out to the more lucrative, yet farther Castles, or to go to the closer, less profitable Castles.

4.) Interaction: The game has players directly affecting one another with their play. This is mainly done through the usage of the Rock Tiles, which can effectively stop an opponent dead in their tracks if they don't have the correct cards to maneuver around it. One fun tactic is to zoom across some nicely laid paths on the board then drop a rock tile in the middle so that no one else can take the same route. The evilness of the rock tiles is somewhat diluted by the fact that players only get a few of them each game. Also, while rare, a player can possibly remove them by discarding two cards, hoping they roll a "6". But rock slides are not the only way to affect an opponent. Sliding into a castle before they do to snag a gold coin, messing up their emerging paths with a different type, and moving a tile out of the middle of a long path of the same path tiles are other ways for players to interact.

5.) Cards: A player starts with a hand of six cards and can play as many as they want per turn but can only draw replacement cards up to three if finished. This means that if I play all six of my cards the first turn, I am effectively reduced to only using three cards on future turns, unless I wait a turn and simply draw one card, slowly increasing my hand back to six. Playing six cards at a time seems like a wonderful idea, usually, as it allows a player to accomplish a short term goal. But players must trade off getting achieving this small success with being hamstrung for the next several turns. There are ways around this, with players attempting to reach the meadow, or even trading a good to increase their hand back up. This, I think, is the heart of the tactical decisions to be made in the game. It's not about laying paths down and moving on them; it's about card management. He who manages their cards best will win the race.

6.) Fun Factor: Some people might be put off by the very interactive "take that" feature of gameplay, as players can really mess up an opponent. However, I find that this is much milder than it sounds, because a player has to take away from their own precious movements to do it. Don't get me wrong - I will gladly mess you up if you are in the lead, and I think it will help me catch back up. The whole aspect of the game is fun in this regard; and while the theme may be one of delivering goods to castles, there's a lot more than that in this enjoyable race.

So yes, I consider this fun game to be an enjoyable racing game, as players seek to stop one another while at the same time coasting around the countryside making good deliveries. It's easy to get into and play and only takes about forty-five minutes for a full game, making it an excellent one to teach new folks. Components are slightly lackluster, but the nice board and competitive play make up for it. Delivering cheese to the castle was never this much fun!