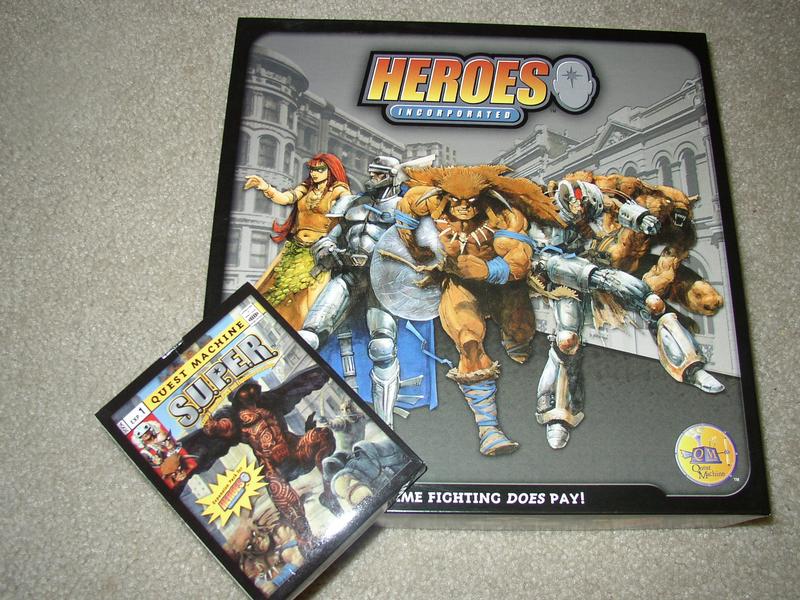 I'm a big fan of expansions, and I want to see them produced for many of my favorite games. Many expansions really enhance the experience and cause me to almost exclusively utilize them when playing the basic games. But in the case of S.U.P.E.R. Scrap's Upgrade Pack and Expansion Revision (Quest Machine, 2004 - Sam Clifford), I would go so far as to say that the expansion is vital! I enjoyed the original game, but in my review remarked how theme was stripped from the game to better emphasize gameplay. That made the original version a fine game but caused it to be soulless for some folk.

S.U.P.E.R., a small unassuming expansion for the game, adds in a smidgen more theme and enough options to really bring out the full flavor of the original game. Incorporating it was a very easy task, and I don't think I'll ever remove it. There are several new heroes, items, and more. Let's see why the expansion is so good.

1.) Rules: A new rulebook is included in the expansion that is a smaller, longer, expanded version of the rules. It clarifies the questions folks had about the original game and includes notes and comments about pretty much everything in the game. Many detailed examples are included; and the complexity of the game, which isn't that high to begin with, is made much easier for the new entrant.

2.) Heroes: Five new heroes are included in the set, with new powers and abilities.
- Dr. Illusion: Has the power of illusions, which allows him to move an orthogonal crime to an adjacent block. Basically, he can make crimes come to him or to his partner, which is a useful task.
- Silver King: He has minions, which basically allow him to use a bonus action to automatically fight crime in a block with a crime pawn and a value of "2". It must be either in his location or adjacent to him. This allows the Silver King to win easy battles without wasting critical actions.
- Cera: She has two special abilities. First, she wins combat roll ties - something that doesn't happen often but can mean up to three points in value. She also has mind control, which allows her to discard a card from her hand to cancel any research card played by another player. This is an extremely powerful ability; and if she is parried up with a "detective" character or manages to draw several cards, she can be immensely powerful, or at least difficult to foil.
- Cloner: He is one of two aliens, which means that he cannot use any equipment. But to make up for this, he has the power "mimic", which allows him to use any power of a hero in the same or adjacent space. One of the most diverse and fun characters to use, if a little chaotic.
- Slingshot: (or Cannonball, if you look at the picture) My favorite character from the set; he is the other alien but has the ability "fly" (move diagonally) and rocket, which allows him to move and fight using only one action. A very mobile character, he is bound to get into combat every turn.

3.) Scrap: One of my favorite characters of the original game, I always felt that Scrap was slightly less than useful; since the equipment was good, but not great. Since the expansion is named after Scrap, one can only imagine that he was improved. And that is certainly the truth! Four powerful "Team HQ" gadgets are included - a limit of one per team. Each team gadget allows you to use one of your normal action markers as a bonus action instead of a regular action.
- Crime Computer - allows you to play a white action marker as a bonus action.
- Dimensional Portal - allows the player to play a Super Villain card on a spot already embroiled in combat.
- Hovercar - allows the player to move (fly) an extra space as a bonus action.
- Pisbro - Allows a player to play a card as a bonus action.
Three other regular gadgets are included, and all of this allows Scrap to become fairly powerful - not to mention, gives all the other characters more options in combat.

4.) Supervillains: The expansion comes with replacement cards for all the old Supervillain cards. These cards are basically the same thing, with clearer text, and a picture! As silly as that sounds, the picture adds to the theme of the game. Even better, the rules include an optional rule in which undefeated Supervillains retreat to a corner of the board, where they wait for a player to come fight them for the points. This allows players to head for Supervillains which are easier for them to defeat and keeps their malevolent presence on the board, adding to the tension.

5.) Justice Tokens: Another optional rule is included in the game, using several "justice tokens". Whenever a hero fights crime and fails, he receives a justice token. Each team may have a maximum of three of these tokens, which may be spent in future battles to increase the die result by one, to a maximum of "6". This greatly decreases luck, and those who simply have a "bad day" will at least get something out of it. This rule is not optional in my games!

6.) Misc.: A few new tokens are included for the new special powers, several new cards, and new reference sheets that include all the new powers. Everything is included in a very small box that I simply got rid of, since ten of these expansions could fit in the original box!

I highly recommend picking up this expansion if you have the original game. Not only does it inject some variety, with new heroes and gadgets; but it ties the game together neatly, adding a few new options and rules that cause the game to be played more smoothly. It probably won't make the original game palatable to those who originally didn't like it, but for those on the fence, this expansion might just push them to the verge of enjoying the game for what it is - a thematic superhero adventure.