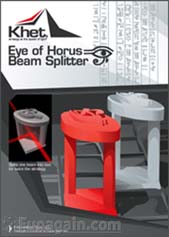 This is a quick update on Khet, the new name for Deflexion. Here is an breakdown of what has changed in the game.

In my review of Deflexion, I stated, "Well, there was no need for this caution, because Deflexion is an excellent abstract game; and while lasers are integral to the central game structure, the game plays like a slightly easier form of chess. At first, the concept of firing a laser to destroy enemy pieces, and seeing how many mirrors one can bounce it off of, tends to dominate play. But after (or during) a game, players suddenly realize the depth of strategy to the game. Often a game will come down to a single mistake a player has made, but I almost always hear, "Let's play it again." Perhaps the laser is a "gimmick", but it's one that works, so who cares!"

I still stand by this assessment and find that the new version is just as enjoyable. There are a few changes, and they are as follows:
- Instead of gold and silver pieces, the pieces are now red and silver. Personally, I find this makes them easier to differentiate.
- Two more obelisks have been added to each side. These not can be stacked on top of each other. When one of these stacks takes a hit, only the top obelisk is removed. These stacks can also be moved in a group, or the top one can move one space away. This takes them from being mediocre defensive pieces to a much more useful defender.
- Four more spaces - in each corner, are marked so that one of the two players cannot move there. I guess this is to counter broken strategy plays that were found in the earlier version. I never ran into these problems, and now, thanks to the new coloring, I never will.

The first expansion to the game is now out, also, which includes the Eye of Horus Beam Splitters. This is a small blister pack of two pieces - each which is identical to a Djed from the original game, except that the mirrors allow the beam to pass through AND reflect it. In game practice, this makes the beams not quite as strong (although it never really mattered), but really changed the game, since players now can possibly kill two different pieces on the board. Sometimes players can maneuver these pieces so that if an opponent kills an enemy piece, they also lose a piece from their own forces. This is a really neat expansion, and I enjoyed how there are five new scenarios included using the new pieces. The rules even explain how the mirror works - something I found slightly fascinating.

So, as much as I like Deflexion, I think one should get the newer version, since it is better looking and slightly streamlined. The expansion isn't necessary; but seriously, if you're going to be playing a LASER game, shouldn't you have every cool mirror you can get for it? Khet is in my top 100 games of all time, and for good reason - the abstractness is well designed, and it has lasers. Lasers. And now split lasers.