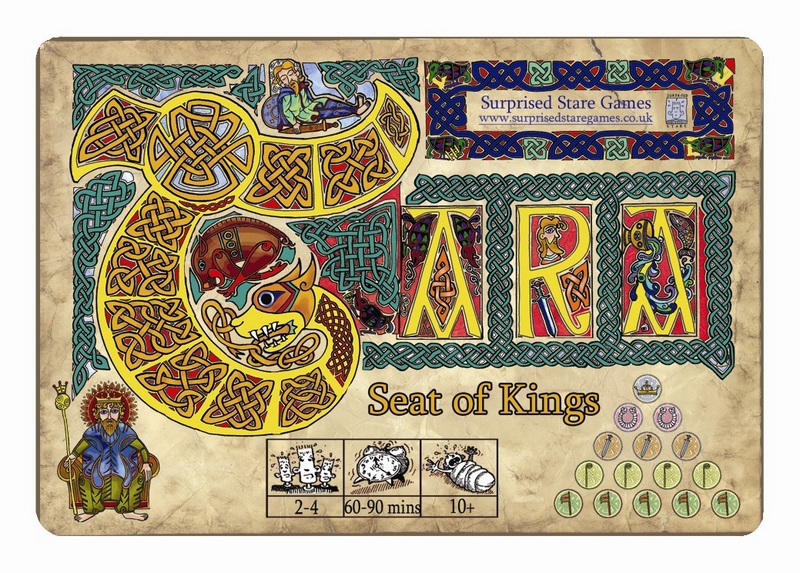 The theme of Tara, Seat of Kings (Surprised Stare Games Ltd., 2006 - Alan Paull) is one in which players use supporters to become Kings in different regions of Ireland. This certainly sounds interesting, but it only takes a few moments of gameplay to realize that the game's theme is simply a covering for an abstract game, as players attempt to maneuver their pieces to the top of two or more pyramids.

But it is a most fascinating abstract game. While the two-player game left me feeling a little disappointed, the three or four player game was much more interesting and involved. A tactical game with a bit of luck, some surprises, and chain reactions - those I played with demanded immediate replayings of the game, and the results were something we talked about later - an unusual occurrence for an abstract game. Tara, Seat of Kings has more behind the scenes than it first seems and is an excellent multi-player abstract strategy game.

Each player takes twenty playing pieces of their color (blue, red, white, or yellow), as well as two King pieces. A pile of "cumals" (worth three cows) is placed on the board; and each player takes two of them, placing them on the top half of their Rath card (the bottom is for prisoners). A board is a set up which contains four regions with a pyramid structure of circular spaces in each with five different ranks (five farmers, four herdsmen, three warriors, two chieftains, and one king). One region per player is selected for use of the game. A deck of cards is shuffled, and the top cards are flipped over to see who goes first (that player is given a start cube); and the first round begins.

In the first round and every odd round thereafter, the entire deck is reshuffled, and six cards are dealt to each player. Players look at their cards, choosing three of them to play in the current round, and setting three aside for the next round. Players then each take three turns, playing a card from their hand each time. On a turn, a player has four different actions that they can take:
- They can play a card, placing pieces into one region of their choice on the board. Cards show different positions on the board (farmers, herdsmen, and/or warriors) and are either fully colored or grayed out. Each fully colored place is where the player may place one of their pieces; but they must place it so that it is in the same "formation" on the card, making sure that a space is on the board for each "grayed out" spot on the card. Players must place their pieces in empty positions if possible; if impossible, they may place them anywhere in the region. If placing them on a position that contains another player's piece, they place theirs on top, holding the piece(s) underneath captive. If placing them on a position that contains one of their own pieces, they create a "fort". When placing them on a position that contains a "fort", they simply destroy the top piece of the fort but do not place a piece of their own. Players may only have one fort per region.
- They may play a Stone of Destiny card, which allows them to swap any two pieces in a region not in a King position.
- They may declare an Amnesty, discarding a card and paying four cumals to release all captives in one region, including the bottom piece of a fort.
- They may discard one card from their hand to gain two cumals.

When playing a card and placing pieces or swapping them on the board, a player may pay the cumal cost on the card to "activate" those pieces. When two pieces are adjacent in the same rank, and one of them has just been activated, they can immediately "promote" into the position above them - the player placing a new piece into that position. The promoted piece then becomes activated and can promote another piece if adjacent to another friendly piece.

After all players have played three cards, each region is checked to see if a traitor is there. Each region has a dominant player (the player with the king, or the player with the most pieces if no king). The player with the second most pieces may pay one cumal to utilize the traitor; if they pass on this option, the next player may take it, etc. If one player decides to be the traitor, they pay their one cumal then draw the top card from the deck. They may exchange one of their pieces for a piece of their opponent in the region then pay the cost on the card if they wish to activate it.

After possible traitors are dealt with in each region, income is generated. Players receive one cumal for each rank in each region that they have the majority of the positions (except of the king). Players also receive one cumal for each rank in which they have pieces in more than one region. Any region that has a new king then clears all pieces from it, with the player who has captured the king placing one of their King pieces there. This player may also place two of their pieces in the region. When clearing pieces, any captive pieces are given to the player who captured them, who places them on the captive section of their Rath cards. Players must exchange prisoners with one another if possible and may also pay cumals to release their prisoners.

1.) Components: Medieval artwork is on all the cards, box, and tokens; although an argument broke out in my group whether or not the cumal was actually a pig. The player pieces are thick wooden tokens, and the king tokens are rather giant, showing firmly that the player has taken the kingship in that territory. The board itself shows a map of Ireland in the background, and the sports for each level in the pyramids are defined by color and symbol - it's very clear and well done - and the cards (good quality) match up nicely. Cumals come in one and five denominations - although it's pretty humorous (to me anyway) to pay for costs in the game with cows.

2.) Rules: When I played another one of Surprised Stare's games, Coppertwaddle, I mentioned that the rules were a bit difficult to figure out and that the theme was slightly obtuse. That is certainly not the case here! The eleven pages of rules are extremely clear with a lot of examples and color illustrations. There is also a page of player notes that give people an idea of what strategies to attempt. But even without the rulebook, the game itself is very intuitive, and I found that people quickly understood how the game worked when I explained it.

3.) Players and Time: With two players, players use only two regions; but once a player wins the King, the region cannot be taken back. If both players win one region, then a third region is opened up. While this made for a slightly interesting game, I found it slightly less than compelling - it was more like a race - and luck of the draw had a much greater effect. With three or four players, the traitor becomes a more interesting element of the game, and no king is ever totally immune! Most games I've been in have lasted between forty-five minutes and an hour, which also is impressive, given the amount of strategy in the game. Games tend to see-saw back and forth, keeping players in it until the end - something that many I enjoyed found delightful.

4.) Chain Reactions: As I just mentioned, players have a possibility to win the game, even if they have no kings near the end. This is a result of the "chain reactions" that occur when a player activates some pieces. It's a lot of fun to see pieces get promoted all the way up to the king. I've seen some players use their cards to take two kings simultaneously, and the traitor can often be a devastating force! At the same time, a well placed fortress can stop one of these chain reactions in its tracks; and players never can feel too secure in their kingship, or they'll lose it easily. The good side to this is that whenever players suffer a devastating loss of a kingdom, it's annoying; but it doesn't necessarily mean the end of the game, so they're down, but not out.

5.) Cumals: Or cows, or dollars, or whatever! A player may have a good position; but since kings don't rake in any money, players must make sure they control enough majorities to bring in money - since a player with a lot of cumals can really utilize action cards to activate quite a few pieces. In particular, the Stone of Destiny cards, which cost three cumals, can be a devastating force and change the entire outcome of a kingdom; and if players want to use them, they need to save their money.

6.) Limitation: Players only have twenty pieces, which initially seems like it's plenty. However, if a player spreads themselves across the board, and/or have some of their pieces captured by opponents; they may find themselves with no pieces when it comes time to activation and promotion! I've seen at least one player not able to take a kingship because they ran out of pieces - imagine their rage! But they only have themselves to blame!

7.) Luck and Fun Factor: Luck is going to play somewhat of a role in the game, if only because of the cards players draw. There were a few times where another player won; and I might have been able to stop them, if only I had the correct cards. Also, the traitor is a shot in the dark, hoping to get a card with the position you need. Still, players must work with the cards they have and can formulate a plan around them - and I think luck plays a minimal part in the game. Everyone had fun, mostly because they liked watching the chain reactions occur, and the game is very interactive and enjoyable. The theme of being king, and having traitors, is fairly well represented, even if the game has the overall feel of an abstract game.

Tara, Seat of Kings was a bit of a surprise to me; not because I enjoyed it so much, but because it went over so well with those I played it with. War gamers enjoyed it because of the direct confrontation available, and other gamers enjoyed it because of the interesting strategies the cards allowed. I personally enjoyed it a great deal and found it marvelously fun, as games stay exciting all the way up to the end, and a winner certainly can congratulate themselves on a game well played. Ireland has just gotten more interesting!