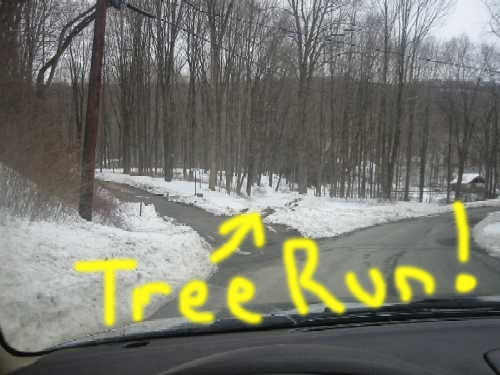 How do you know when you've been playing a video game too much? When in game things invade your real life.

I like the Wii game Excite Truck. Heck, I love the game! It's my favorite game on the Wii! I love it so much it is invading my daily life!

While driving through the snow on Saturday I spied an old road that has been half overgrown with trees. But, there is enough room to drive between them if you are careful. This is known as a Tree Run in Excite Truck.

This is not the first time this has happened to me. I used to play an arcade race game where you sit down behind the wheel and have to get your car to the checkpoint before time runs out. As long as you made it to the checkpoint you would get more time on the clock and continue racing to the next checkpoint.

I only beat that game once and I can't recall the name of it, perhaps one of my readers knows it?

What was interesting about that race game is that the checkpoints were overpasses you drove under. I remember, several years ago in California, I was almost caught for speeding.

See, I had been playing that game earlier in the day and... whenever I saw an overpass a little voice in the back of my head was yelling, "checkpoint ahead, step on it!" Luckily I caught myself doing this and stopped. Good thing too because not five minutes later a state trooper passed me by!

I once did get a speeding ticket in California and I had to go to the drivers course as punishment but that was years ago! I also got out of a ticket for doing 120MPH on the California Freeway system. That falls under Army Story and I will relate that one on another day!