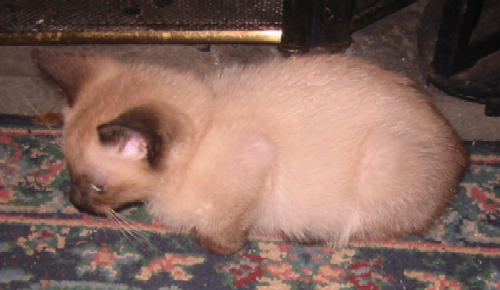 Everyone loves kittens. They are soft, cuddly and oh so cute. Some people have the strange idea that they will always be tiny balls of fur. Then one day, you come home and your kitten is gone. You look everywhere but you can't find your cute little kitten. Instead you find a cat.

This is Koko, he was a tiny little kitten. Now he is a cat.

Koko is the most recent of our six cats and he was so small when we got him. In fact he was under weight when we got him and he had to be de-wormed by the vet before he started to gain weight.

He used to eat like crazy as a kitten and never gain any weight. That was our first tip that something was not quite right with Koko. Being good cat servants we had him properly checked out during his first vet visit and took care of the worm problem.

Though he was now worm free he did not slow down his eating.

As soon as food hit the floor he was there to eat it.

Now Koko is one year old and... I call him the chubby cat, a name I have been using for a while that irked my wife when I first started using it.

When I would point at Koko's belly my wife would just points at mine and calls me chubby too!

Well, here is Koko now, big belly and all. He's laying back in my daughter's Ikea chair and he is quite comfortable.

Sometimes he sleeps in a small cat bed that was originally a cat bed meant for a build-a-bear doll. He hangs out of that cat bed when he sleeps in it. Sometimes he looks like an old man on a recliner watching the Sunday football game.

I expect him to look over and say, "hey, I'm starvin' over here. Someone bring me a snack?"

They get along great with each other and are known for terrorizing the other cats in the house whenever they get the notion.