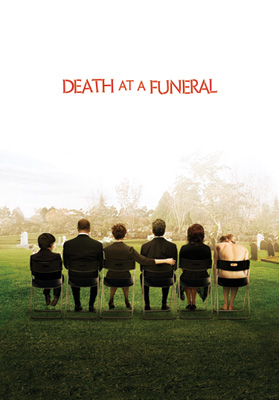 Once again one of those little red Netflix

envelopes graced my mailbox this week. This one was one we ordered based off of a trailer we saw before another movie. I present to you my review of Death at a Funeral

The movie begins with a funeral. In fact, 90% of the activity in the movie takes place during the funeral. The patriarch of the family has died and the family is now gathering at the home of the deceased to pay their respects. You might not think there is a lot of comedy that can occur at a funeral without being morbid in nature but you would be wrong.

Daniel, the good son, and his wife Jane have been preparing to move out of his parents home and get their own flat in the city. The expense of the funeral has set him back a small bit and one thing he does not want to deal with is his wife's constant nagging about putting a deposit down on the flat. Daniel expects his novelist brother Robert to bear half the cost of the funeral thereby releasing his money to pay the deposit on the flat. Unfortunately when Robert arrives he informs Daniel that he has no cash at the moment and will not be able to pay his share of the expense for several months.

The thing to note here is that everyone looks up to Robert as a great success because A: he is a successful novelist and B: he lives in a penthouse in New York City. when the family members find out that Daniel is giving the eulogy they quietly lament how sad they are that Robert is not doing it. which in turn only inflames Daniel's jealousy of his brother.

While this is going on their cousin Martha is bring her fiance to the funeral to tell her dad they they are now engaged. Her fiance Simon is a very good man but her father can not stand him. To make matters worse when they go to pick up her brother Justin (who is training to be a pharmacist) Martha gives Simon a "Valium" from a bottle she finds in Justin's kitchen. If you can't guess, those are not Valium.

By the time they arrive at the funeral Simon is in suffering halucinations from the drug he took. This bottle of "Valium" plays a major role in the movie as it becomes lost and found again several times.

While waiting for everyone to arrive Daniel is constantly being stared at by Peter. Not knowing why Peter is here (no one knows him) he is startled to find out that Peter was a friend of his father's. After a short meeting in his office he finds out that Peter was his father's gay lover and he wants some money or he goes public.

Know how the title says "Death" at a funeral? Well, I think you will know where the movie is going at this point.

My wife and I greatly enjoyed this movie. It had great acting and a very funny script. If you like dry comedy you will likely enjoy this film.