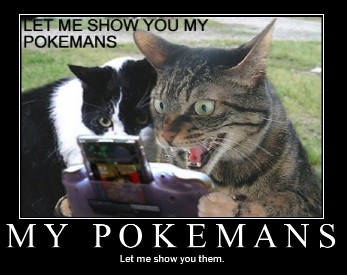 One of the most anticipated features of the new Pokemon games for DS (Diamond and Pearl) has to be the GTS, or Global Trade Station. Using the GTS players are able to trade their Pokemon with players all over the world.

Parents need not fear this as the GTS does not allow for any real interaction between players. You either seek a Pokemon or you offer one.

The GTS is located in Jubilife City. Inside the building there is a big globe. If you look at the globe you will see little markers that indicate where in the world your Pokemon came from. The most recent trade will have a blue marker and by pusing the "X" button while your cursor is on top of a marker you can find out the name of that place.

The GTS is a great idea but, they fell short in a few areas.

The biggest problem, to me, has to do with having to have seen a Pokemon to ask for it via GTS. I thought I would be able to use GTS to acquire those rare Pokemon that I have not seen but I can't!

A minor problem I have with GTS is that it will show me results where people want Pokemon I have neither caught or even seen. If I'm looking for a Pichu and someone wants a Pidgey in return I'll agree that it is a fair trade but, If I don't have a Pidgey (or have never even seen one) why does GTS show me this trade? With a limited number of trades able to be displayed on the screen why clutter it up with trades I can't perform?

The only other minor problem has to do with people who expect me to trade them a level 100 Dialga for a level 5 Starly. Are you insane? Do you lack any concept of rarity and value? The only person who will make that trade with you is someone who is going to send you a "hacked" Pokemon!

To combat some of the minor problems on GTS that are caused by other players, not Nintendo, I offer the following tips.

Certain Pokemon are more valuable than others in the Pokemon community. If you go to a Pokemon fan forum you'll see that many favorite Pokemon are shared by a lot of people. I recommend trading something from the evolution lines of, Raltz, Eevee, Gibble, Dratini, Bagon, and Shinx. Any Pokemon that Ash or a main anime character uses will be in demand. A female Pokemon is always more valuable than a male Pokemon because it can learn new moves through breeding with other Pokemon.

I hope these tips have helped you become a better GTS trader.

PS: I will be opening a Pokemon Farm at some point in the future. I'm still in the proccess of migrating Pokemon over to my Pearl game. Once I complete the migration I will be offering to do Wi-Fi trading for any "breedable" Pokemon you may need. Stay tuned!