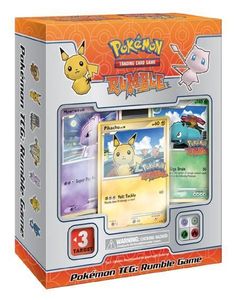 On December 2, 2009 Pokemon International released the Pokémon Trading Card Game (TCG): Rumble to coincide with the release of the Pokemon Rumble game on WiiWare. This game combines TCG strategy with a board game presentation, is fully compatible with all of your existing Pokémon Trading Card Game (TCG) cards and can be played with two to seven players.

The box contains 16 cards (same in every box), a set of energy dice, a targeting die, a Battle Royale Playmat, 14 player markers (two per player), and rules. The 16 cards are from an exclusive Pokémon Rumble set that can only be acquired in this box and each card has a foil Pokémon Rumble logo imprinted on it.

The game begins by laying out the Battle Royale Playmat and placing Pokemon cards (one face-up and one face-down) on each of the seven slots on the playmat. Players then take turns placing their player markers (max of two per slot, can't double up your own marker) on the playmat. The player markers have either a three or a five on the back side and these numbers come into play when the game ends for scoring purposes.

On a player's turn the four energy dice are rolled. The dice are six-siders that have a dash on one side and various energy symbols on the other five faces. There is also a special energy symbol that can be used as any type of energy. After rolling the dice the player scans the Pokémon on the playmat (not just ones with his/her marker) and chooses which attack to use. For example Rattata can use Bite for 20 damage at a cost of two colorless energy and Pikachu can use Volt Tackle which can cause 60 damage to another Pokémon but also causes 10 damage to Pikachu for a cost of one electric and two colorless energy. If both of these Pokémon are on the playmat and a player rolls enough energy they can use either of these attacks to injure or knock out other Pokémon.

After choosing what attack to use from which Pokémon a special red target die is cast. This is another six-sided die that is numbered from one to three (three ones, two twos, one three) and decides which Pokemon is hit with the attack. All attacks are made in a clockwise direction and the Pokémon launching the attack can not attack itself.

After rolling the target die and seeing which Pokemon is hit weaknesses and resistances are taken into consideration. This part of the game works exactly the same as the standard TCG system. When a Pokémon is weak or strong against an attack they suffer more or less damage. If a Pokémon is not knocked out from an attack, damage counters are placed on the card. If a Pokémon is knocked out from the attack the attacking player takes the card and flips the remaining card face-up. If that was the last Pokémon in that slot then the slot remains empty and is ignored for the rest of the game.

The cards in the game are 100% compatible with the existing Pokémon TCG cards but not all Pokémon TCG cards can be used in Pokémon Trading Card Game (TCG): Rumble. Any Pokémon that requires more than four energy for its attacks can not be used due to the number of dice in the game. Also special effects are not used in this game so Pokémon who rely on such things will be less powerful.

All in all I have to say that we played the game and found it enjoyable. The game is weighted more towards luck than strategy (dice) but some basic strategic skills will help. The learning curve is very low and even though the game suggests players be 10 or older this game can easily be played with younger players who enjoy collecting the Pokémon Trading Cards but are not able to play the game.

Put this one on your holiday shopping list for your Pokemon fans!

As an added bonus Pokémon International has also released a new collector tin for the holiday season. The Arceus tin is available now and includes a special foil Lv. X Arceus card and four booster packs from recent sets.

You can purchase this game through Funagain Games.

This is cross-posted on PokeFarm