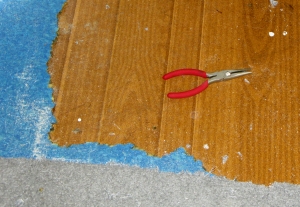 The master bedroom is about 12 feet by 15 feet in size and one third of it was added on in the 1990's. The front five feet were added. The rest of the flooring is a very fake looking wood grained linoleum while the front five is just plywood.

The first part of the job is to remove the old carpeting and carpet pad. Because our house is so small moving everything out of the bedroom for a few hours was not a very big possibility. Couple this with me being the only strong person in the house and you begin to see my pain. 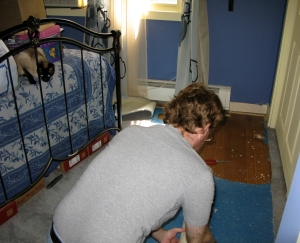 Removing the carpet itself was the easy part. All I needed was a carpet knife and something to tie the remnants up with. It was not that hard to slowly move furniture out of the way and cut the carpet out. Even cutting the carpet padding out was fairly simple. It was simple until I discovered the people who installed the carpet pad used a lot of small 'scrap' pieces and a staple gun on full auto!

Yes, the hardest part of the job was pulling all the staples out of the floor!

I started by using a pair of flats to pull them out but that caused me some serious hand pain. In the end I used the old standby of screwdriver + hammer and popped them out. For the few stubborn ones I used the pair of flats as well.

I spent a lot of time on my knees doing this work and my knees are not in the least bit happy about this. To say they are angry is an understatement. Along with the staples I also had to pull up the carpet tack strips. Those are those pieces of wood you tack down with sharp points sticking up to hold the carpet in place. Don't ask me the technical term because I don't know or care. 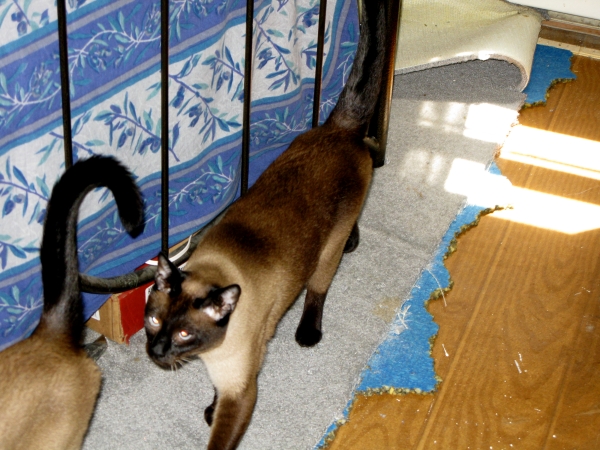 I still have the closet to do but it's a small closet. I also have to pull the floor trim off the walls because it sits a little bit to low for the flooring to be installed underneath it. Yeah, that's going to be fun!

Next weekend a friend will be joining me with some power tools to install the new flooring. This had better be worth it because currently my entire body is in pain and not the least bit happy about this.