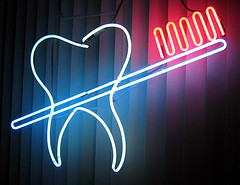 I had to go to the dentist this morning and get two cavities filled. It wasn't all bad because the teeth in question had been filled about 15 years ago when I was in the army and they still had the old metal fillings in them.

A few months ago I had to get a filling replaced that fell out. When my dentist replaced it he used a new type of filling that matches the teeth. Yeah, as much pain as I was in beforehand I was very happy afterwards not to see that ugly patch of metal on my tooth.

This is why I went to the dentist this morning in a good mood. I knew I was going to get two old fillings replaced with the new "looks like a real tooth" style of filling.

I'm not a vain person but I do not like for metal to show when I smile. I've had enough dental work in my life to understand the value of a good smile and that is where I am headed.

I know I can't just go in and tell my dentist to replace all of my fillings (too expensive) but every time I go in now I look forward to the idea of another one of those things getting yanked out and updated. I still brush and floss regularly (I guess not regular enough because I still have problems) and it's not that I'm trying to gain new cavities. I just want those old fillings gone.

The one thing I do not enjoy is the novacaine. It was well past lunch before I could actually eat anything. I tried to eat a burrito around lunch time but I failed. I even tried drinking a soda from a can and failed. It's been six hours since the injection and the sides of my mouth still hurt.

I figure in a few days my tongue will get used to the shape of the two new fillings. Just in time for me to go in and get the last two "problem teeth" fixed. After those two that will be it, no other teeth show signs of problems though some of them do still have old fillings.