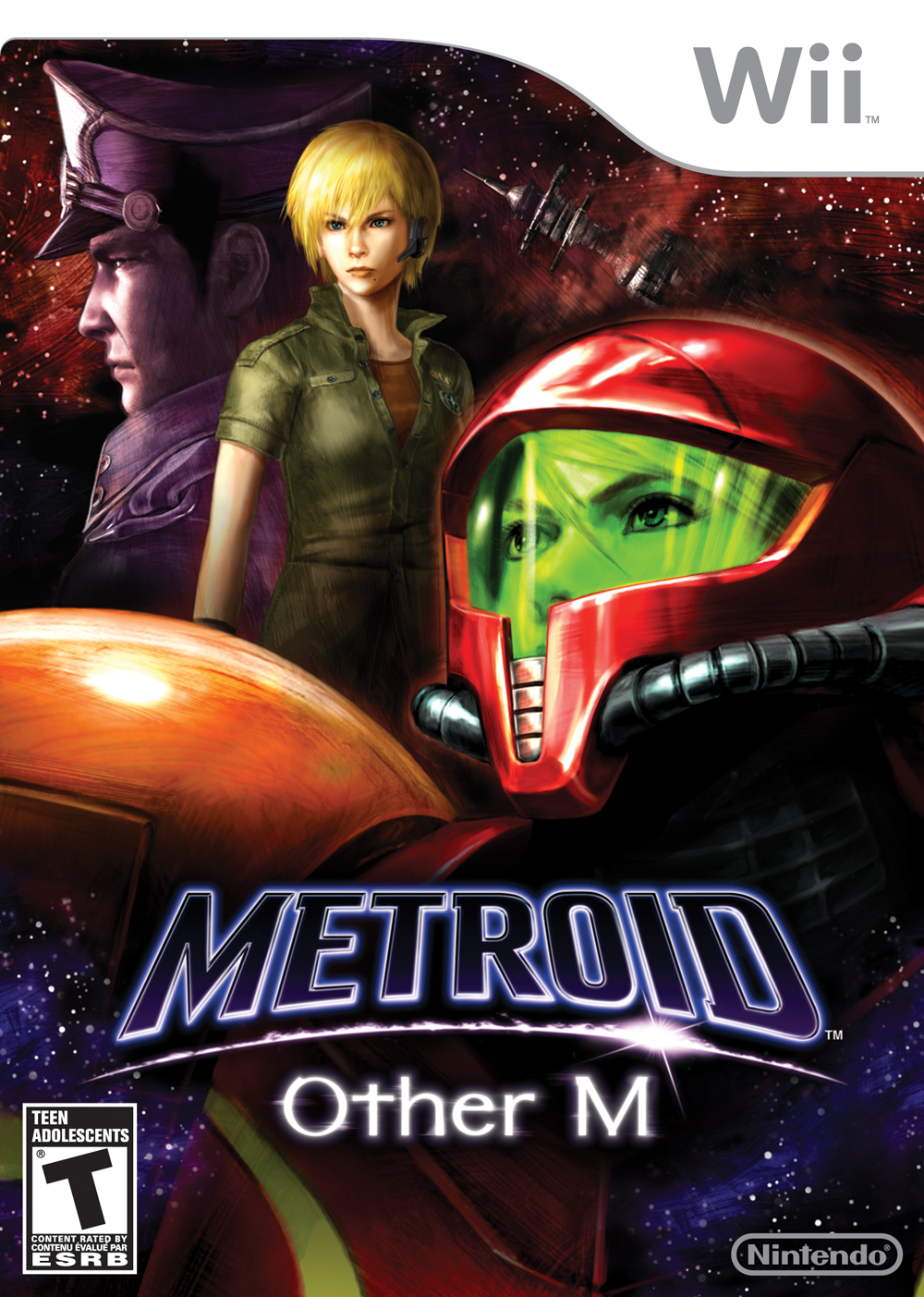 
For decades, Samus Aran has been known as one of the first female protagonists in video games, and one of the most enigmatic. Having traded her haunted past for the solitary life of a bounty hunter, Samus™ finally tells her own tale in this revealing, personal story of her failings, her flaws and ultimately her motivation. Metroid: Other M is an unprecedented collaboration that blends the slick, action-packed production of the world-renowned Team Ninja development team with the game design talents of the creators of the original Metroid. Metroid: Other M is a dramatic new direction for a legendary franchise and a bold new blend between cinematics, storytelling and the best in interactive entertainment

At least that is how Nintendo is billing this new game in the Metroid franchise. What do I think? Well, my feelings are not even close to what you will find on other game review sites. I spent my hard-earned coin on this game and I expect a certain amount of enjoyment from a game that I pay real money for. This is even more true when the game comes from such a classic Nintendo franchise.

I have some good news in this department, between the soundtrack and the creatures you fight this is a Metroid game. While the music is new it does incorporate classic Metroid musical patterns within it. When enemies are nearby the music does change to reflect this. Unfortunately the game will sometimes play music that indicates nearby enemies when no enemies are nearby. For gamers who pay attention to video and audio cues this can be a bit of a problem.

Most of the basic enemies are classic Metroid fare. You have Zoomers, Skree, Reo, and many others. While the Space Pirates are dead the original stock that they evolved from does exist on the Bottle Ship so don't be surprised when something that looks like a Space Pirate shows up.

Unlike previous games there are no rewards for killing enemies. Instead enemies are nothing more than speed bumps on your way to the next healing/recharge/save point. There is also a "concentration" option where you stand still and hold a button down to refill missiles and, if hurt bad enough, recharge some of your health. It's all about thinking those happy thoughts! This change makes boss battles very hard if you have the misfortune of stumbling upon one while in a low health status.

All of the classic weapons exist in the game and unlike previous versions there is no big event that strips Samus of all of her gear. Well, unless you count the storyline reason as to why Samus can not use her gear right away.

Daddy can I use my gun yet? 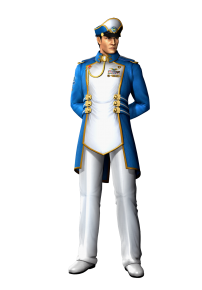 In previous Metroid games there was always a reason as to why you were searching all over the place for power-ups and weapons. While it gave you something to strive for it also didn't exactly feel right that Samus could go to an alien planet and find the exact part to upgrade her suit. This time around Samus does not lose her stuff, she just has to ask permission from dad Adam, the commander of the Galactic Federation Strike Team that Samus encounters on the Bottle Ship.

What we find out is that Samus used to work for this guy when she was a whiny, wimpy, tweenager with daddy issues Galactic Federation Soldier. Who knew, eh? So, in exchange for letting Samus help the Strike Team, Adam allows her to search the ship. The only caveat is that she has to follow orders and she can't use her gear unless Adam OKs it an all. 'Cause, you know, setting off Supper Missiles and Power Bombs might have a negative impact on the hull integrity of a space station.

While this does make more sense than her finding gear all over the ship it is mildly annoying when you are trying to do something and the gear has not yet been unlocked. In earlier games it was not that uncommon for high level players to figure out ways to access weapon upgrades early, not so in this game. While I can understand the weapon lock-downs what I can not understand is why her suit upgrades require permission. When I'm taking damage from heat why do I need Adam's permission to activate the heat-dampening effects of my Varia Suit?

There is also the issue of Adam unlocking doors for you (and his troops). Which is kind of weird because you will encounter a locked door and shortly after you pass through it you find troopers on the other side. How did they get through the door? Did Adam lock it behind them just to force you into fighting some weird beast?

General gameplay consists of using the D-pad to move and a fire and jump button. The game has an auto-aim feature so you pretty much just run around the screen mashing the fire button. There are also some special moved Samus can do, the most common being sensemove.

By holding down the fire button and using the D-pad to dodge an attack your gun instantly reaches a max charge and you can fire on the enemy. Rinse and repeat. Yes, this is how most battle goes. Do a whole lot of sensemoves until you figure out the guys rhythm. Once you do add in the charged blasts between sensemoves. This strategy works on every boss in the game with only a few minor exceptions where launching a missile speeds up the battle. 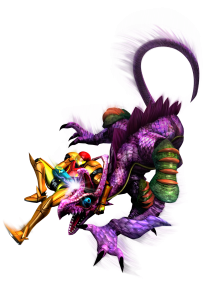 There is also a Killing Blow maneuver that requires running towards a downed enemy and hitting the fire button to kill them.

Personally, I feel that Metroid Prime: Corruption has the best controls for a Metroid game (if not FPS in general). Why they went with the 'simplified' control scheme from the NES days is beyond me.
The game switches between third person platforming and first person standing still all throughout the game. While in platforming you often suffer from a terrible camera angle problem that is reminiscent of the horrible Star Wars Clone Wars game. Yes, jumping is near impossible in some areas of the game.
Another problem is that some rooms behave not as a typical room but as if you were running on a circular track while at other times circular rooms behave as normal. Some corridors look great when you run down them but when you turn around and run back the viewpoint does not change so rather than running towards things you can see in the distance everything in the distance moves further away and you run straight into darkness, often getting hurt by an unseen enemy.

In order to scan or shoot missiles you must be in first-person mode, also known as 'shoot me cause I can't move' mode. The only good thing is that most enemies can be defeated without using missiles so you don't *have* to bounce between modes in most fights. There is also a short second or two of slow-time during the transition. Be warned though, when you enter first-person mode you will be looking in the same direction as Samus is facing. 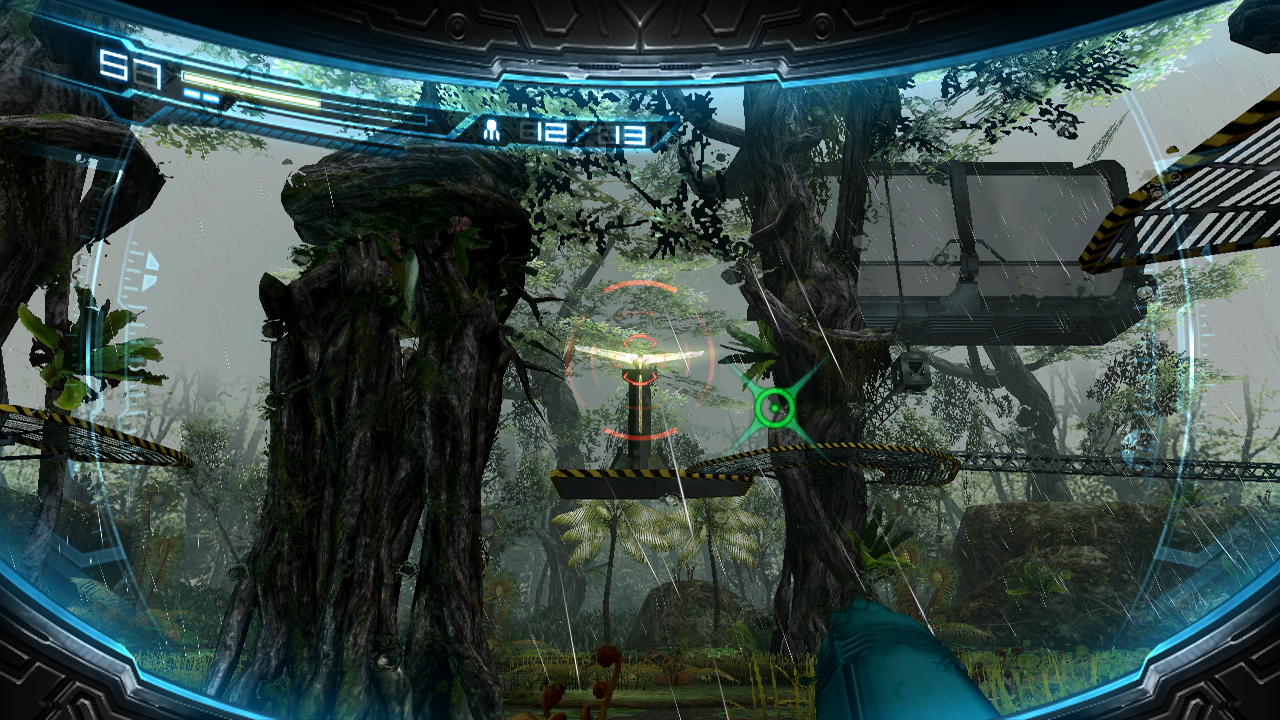 Why am I staring at a wall?

One thing that was added to the game (or broken, depending on your point of view) is scanning. There are several "puzzles" where you are dropped into first-person view and have to play "find the pixel" on the screen. Once you find the mysterious pixel you scan it and the story continues.

Some of these scan events are trivial, "look, a huge corpse!" While others are extremely tedious, "find the black door in the black room with the light outs."

Traditional scanning form the Prime games, where you collected lore cool things like lore, are gone. You can scan bosses but all that does is give you their HP gauge. You can not scan the environment for story elements. Which may be a good thing because the included CGI rendered story is loooooooong.

Who put this story in my shooty game?

The storyline of Metroid Other M is long and tedious if not more than a little sexist. Why take one of the coolest and toughest female characters in all of video game land and turn her into a whiny bitch with daddy issues? I can't help but wonder if Samus would be the right person for the job if Metroids were controlled by Father Brain rather than Mother Brain.

We are talking about a chick so tough she can kill Space Pirates with a pistol in just her Zero Suit! Now that mystique is gone. What's the deal Nintendo? You had no problem beefing up Princess Zelda over the years with her Sheik alter ego so what happened? What?