Rayman: Raving Rabbids is one of the first games I purchased for my Wii. The game uses the nunchuk attachment so I had to buy a second one of them as well.

In Rayman: Raving Rabbids you take on the role of Rayman. Rayman as an interesting character who has no arms. Instead his hands simply float in the air. It's kind of weird to look at but it works.

At any rate, the storyline of the game has Rayman being captured by a group of Raving Rabbids who force him to perform various mini-games to earn cool bonus items and, eventually, his freedom. 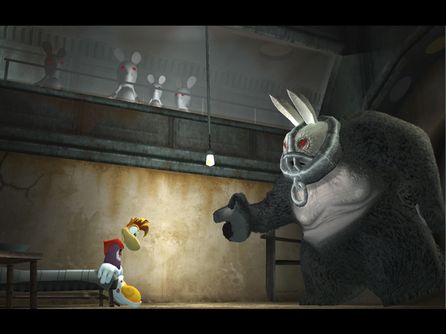 Poor Rayman, he has to sit in his cell all by himself until the jailer rabbid comes for him.


When the jailer comes for Rayman he is lead into a large stadium with five exits. Four of those exits lead to mini-games and the fifth leads to the end game for the level. Once you have completed three out of four mini-games you can take on the end game. However, you only get bonus items if you beat all four mini-games on the level. 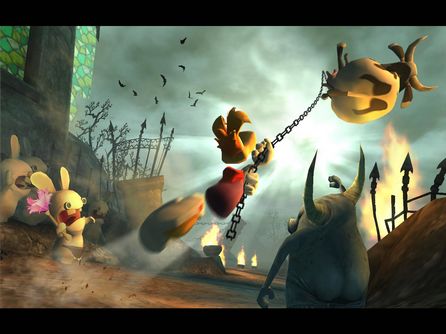 Rabbids have there own version of cow tossing


One of the first mini-games you will encounter is the dreaded Cow Toss event. In this mini-game you will be using the Wii-Remote as a chain that you will swing around your head. Once you gain enough momentum the cow at the other end of the chain will be flying around and around. Once you let go of the chain the cow will sail through the air. Get enough distance on ol' Bessy and you can win this one easy. If you don't aim properly you may throw the cow into a rabbid instead!

There is a small rocket ship indicator on the screen for this mini-game that lets you know how much power you have built up. If the rocket's engine begins to flare then you are full power and ready to throw! 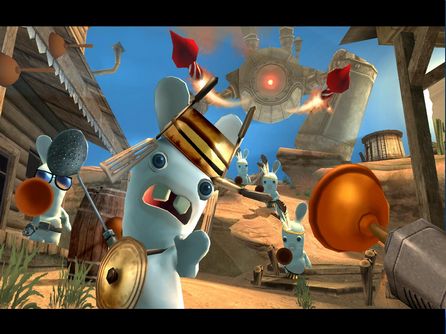 Plungers are a deadly weapon


One of the end games is the extremely fun "first person shooter" mode where you shoot plungers at the Rabbids. These games get progressively harder as you advance through story mode. You gain bonus points for making trick shots and there are some special items you can use during the game to help you win. 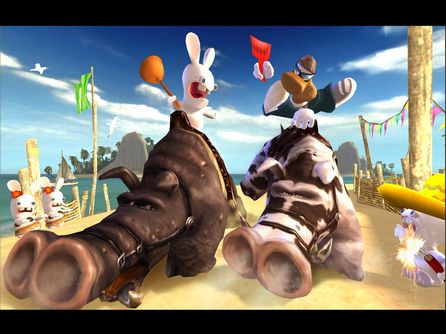 Check out my hawg!


Another game that pops up as an end-game is the very challenging Hawg Race series of games. these games are very unforgiving and hard. You get three turbo boosts and those hawgs do not turn on a dime, or on most corners for that matter!

There are over 70 mini-games for you to battle through and, once you complete the story mode, you can play them all in multi-player mode! 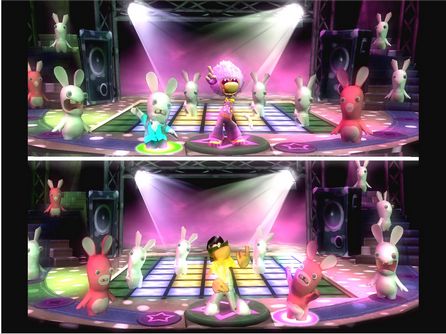 Rabbids like to dance. This is them dancing in multi-player mode!


Many of the multi-player games allow for all players to be active at the same time. Not all of them do this but most do. This makes it great fun as the games are relatively short and you can see how well you do against your friends right away!

The plunger shooting games also have a wide variety of options from team play to competitive play.

I greatly enjoy this game and my daughter and her friends do too.

If you are a fan of the mini-game format then I highly suggest you get this game for your Wii. It is a ton of fun and the story mode is not overly hard to beat. There are a few very difficult games mixed in but, for the most part the games are more fun than frustrating.

To play four player you will need four Wii-Remotes and four nunchuks. With the current shortage of Wii-Remotes it may not be that easy to get a four player game going but, once the supply catches up to demand it will.