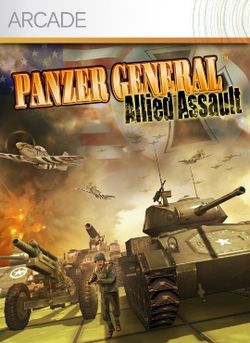 The Panzer General series of games has been out since 1994 when SSI published the first one. Seven sequels were produced with Allied Assault being the most recent. SSI is no longer its own company and this particular incarnation of the title was created by Petroglyph Games for the Xbox360 Live Arcade.

Unlike the previous titles in the series that emulated a form of the old style chit based war gaming systems Allied Assault takes the game into the card game realm. While the playing area is a board (6 wide by 5 deep) the game system is heavy on the card side using the board only for placement of units and for defining victory conditions.

Let me state right away that I have not purchased the full game and that this review is based solely on the results of playing through the demo a few times. While this has not allowed me to experience the full breadth and depth of the game it has shown me enough of the game to form an opinion on it. 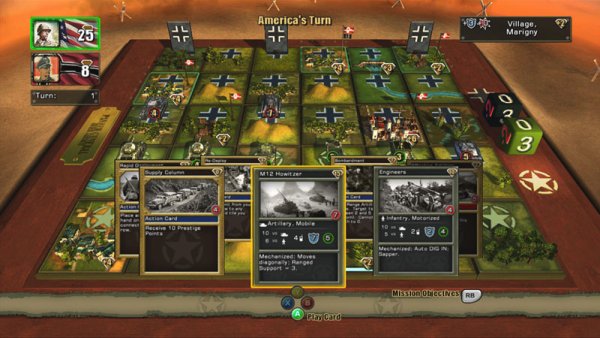 Panzer General: Allied Assault is a two player game where you play either against the CPU player or a real player over Xbox Live. More than half of the achievements are Live-based so expect to play many games online before earning them all. Playing against a human opponent is not that different from playing against the A.I. except that you should expect the games to take longer.

The game uses a point system (prestige) in an attempt to limit your actions on each turn. Each card you play has a prestige cost that must be paid in order to be played. While this sounds like a good mechanic in theory it only works until you exploit the one major loophole in this game which I will discuss later.

Prestige points are earned each turn based on the zones you control. Some zones earn you bonus points (cities, towns, etc). A zone is considered to be controlled by a player if their units were the last to enter or exit that square. Thus it is beneficial to use a fast unit to grab land whenever possible. Just be ready to defend the lands you have taken lest your opponent do the same to you!

You can also earn prestige points after you defeat an enemy unit in combat. If you choose not to earn the points after combat you also have the option to force your opponent to lose points. While the tutorial tried to make the claim that it can be very useful to do this I find that the instances when denying my opponent points outweighs my gaining points to be few and far between. In fact it is only useful if denying them points would put their prestige low enough as to deny them the ability to play any more cards in response to your attacks.

When your turn begins you draw a number of cards. If your hand size is lower than ten you also get the option to spend prestige points to draw more cards. While I did not see a definitive cost formula it does appear that the cost to draw more cards costs you X prestige where X = the turn number. Thus if you want to buy bonus card on turn one they will only cost you one prestige each. Those same cards purchased on turn five would cost five prestige points each.

After you draw cards you then have the option to place new units, move existing units, have existing units 'dig in' (gain a defensive bonus), attack with existing units or place a relevant card from your hand. Movement is very simple so I will not even bother covering it here. Instead I will move directly into the combat system.

When units are adjacent to enemy units you can engage them in combat. This consists of comparing attack and defense values as well as checking for supporting units. Supporting units are any adjacent friendly units and artillery units that are within range. If one side is 'dug in' they get to attack first in combat, otherwise attacker fires first.

After figuring the base values for both sides you have several rounds of playing combat cards. These cards can alter some elements of the combat round (and only that round) and are discarded after being played. Some cards can add or subtract from attack and defense values while others can cancel the combat entirely, remove support for the enemy unit or even cause direct damage to the opponent. Combat cards can be played until both sides pass.

After playing combat cards you can then sack one card for it's Battle Value. This number ranges from 0 to 6 and is added to your attack or defense score depending on which side of the battle you are on. As strange as it may be I did see some cards with a Battle Value higher than the value they impart for being played as a Combat card. Why would you play a card for three points (paying prestige) when you could sack it for 6 points? 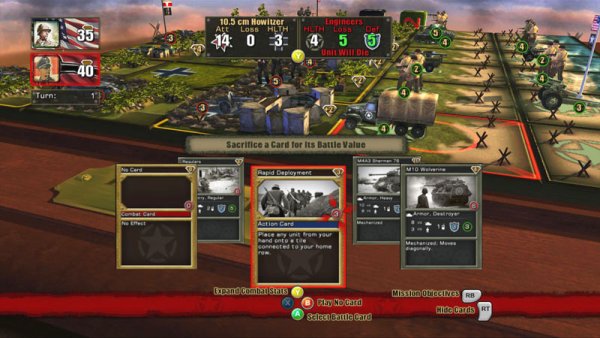 Once all numbers are finalized a die is cast and the battle concludes. If the attacker's total is higher than the defender's defense damage is taken. If enough is taken to eliminate the unit it is removed and the attacker gains a point of health. Armor units also have the added bonus of being able to move into the now empty square.

This is the core of the game and as a representation of card/chit war gaming it's not that bad. Where the game is broken is in the cards. OR should I say in one particular card.

Fans of CCGs know that it only takes one bad card to ruin a game. Games are quickly thrown out of balance when one card opens up a loophole that the game can not handle. Panzer General: Allied Assault has one such card. While I will not give the name of the card I will tell you what it does.

This card allows you to search your discard pile for two cards and put them into your hands. At this point you are either thinking, "oh no!" or "so what?". If you don't see the potential mayhem that can occur from such a card existing in this game than you have not been paying attention or you have not played a lot of CCGs.

Is this game any good? Is it worth 800 points? My good friend Grim seems to think so even with the exploit described above. Of course he has no intention of playing the game online where the exploitation of this broken card will make for some very one-sided or drawn out games depending on whether or not both sides are aware of the exploit. For me it's not worth 800 points. I'd rather play Panzer Tactics on the DS.