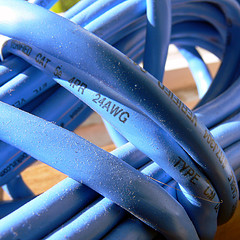 >I work in Telecom and a lot of people ask me about DSL and faster forms of data lines. The most common complaint I get from people is, "why is my upload speed so low?"

The simple answer is that when DSL was designed the average Internet user downloaded far more data than they uploaded. DSL was designed to maximize your download speed at the cost of upload speed. Until peer-to-peer began hitting the mainstream (Joost/Skype) no one cared all that much if their DSL line was 256/1.5.

Let me take you back for a spell...

In the beginning, back before the Internet, I used to use a 300 baud modem to connect to a few local BBS services in my area. I used a Commodore 64 back then. Eventually I upgraded to a 1200 baud modem I bought from someone I met on the boards.

That was a very slow time. You could read the text faster than it was being displayed!

A few years later I moved up to a 2400/9600 modem/fax setup with an IBM PC-clone. This was good enough for playing Doom between two people but I did eventually get the full 9600 baud modem.

During this time the Internet was just starting to become more than just AOL. Newsgroups were all the rage and that "WWW" thing was just beginning to grow some legs.

The telcos had a service available that they called ISDN. It provided three data channels and sold very well. In fact it still sells fairly well today!

Over time we did make it to 56K modems and most people were happy. Well except for the Telcos! See, the advent of the Internet and dial-up access put the Telcos in a bit of a bind. The switched telephone network was never designed for mass amounts of customers to sit on their line for hours on end. The switching system was never built on a 1-to-1 ratio. No, most switches were either 10-to-1 or 8-to-1. Because people were sitting on their lines for hours on end the Telcos had to do something!

They started out with a system of load balancing, which is a fancy way of saying, "let's move the high usage customers off of the same equipment." This also worked, for a time, but soon everyone was always on line.

An added benefit of this time was that people began ordering second lines just for Internet access. The Telcos saw a huge upswing in second lines because if you were on line your phone would not ring and you might miss an important call.

Early DSL was much faster then dial-up and more reliable. You could get close to a T1 speed level for download but not upload. Since most folks did not do a lot of uploading this was not a real big issue.

See, the services are out there if you consider your DSL to be "too slow" you just have to be willing to pay for them.

You wouldn't go and try to drive a Honda Civic in a NASCAR race would you? Why then do you complain when the service you are paying for is not the service you want? It's not as if DSL is the only option in town. There are plenty of faster options out there. Options that allow you to do your peer-to-peer and hosting your own web server.

So, before you start complaining to me about how slow that DSL line is why not take a look at the prices for faster services? Once you do that you will see what a bargain that "too slow" DSL service really is.