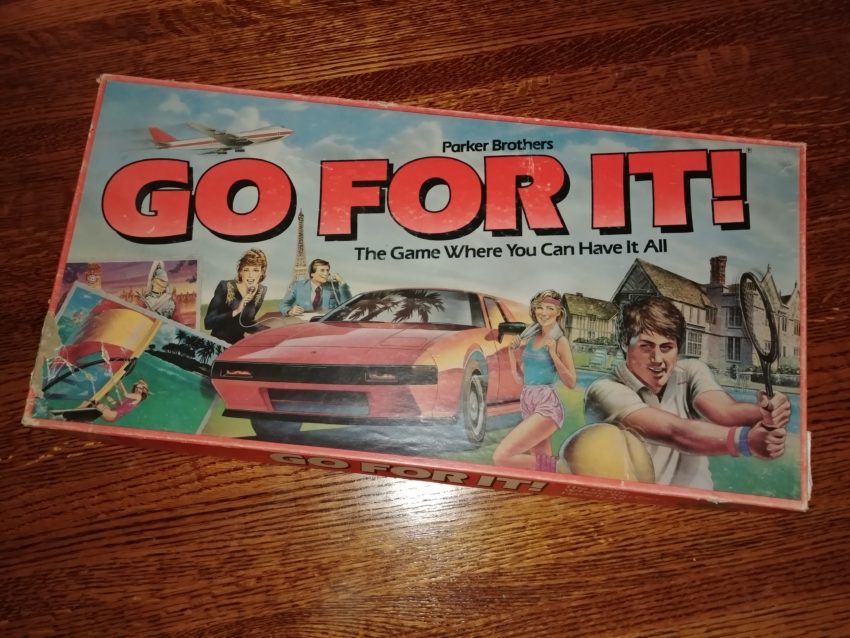 Lately I have been having stellar luck finding old board games at my local thrift stores. Not only have these games been priced low but they have also been missing either only a few replaceable pieces or completely intact. The most recent find is Go For It, a boardgame straight out of the American 80's!

This mid 80's board game is designed for 2-6 players ages 8+. Take the two player version with a large block of salt. This game plays with best with a full compliment of six players. I say that because in a two player game cards that would allow you to choose which player to mess with only apply to the other player. As such, this game is clearly designed for playing with six rather than two players.

Each player takes a career card (with clip) and $10,000 from the bank. There are also six birthday tokens that get placed on the board to mark each player's birthday. The gameboard is divided into 52 spaces (weeks) and landing on a birthday results in the birthday player getting gifts. Landing (or passing) Labor Day works as a pay and promotion day.

Contrary to what you might expect, this game uses a shared movement token. As this token moves about the board the calendar moves ever onward. Only the player who rolled the dice does what the space landed on says. There is also a brief trading phase where the active player can try to buy or sell status cards with the other players.

Whenever the move token lands on or passes Labor Day, all players count up their status cards and move their promotion marker up or down on their career card.

For the most part, every two status cards you own will move you up the promotion track. Consequently, losing status cards can get you demoted.

There are twelve different career paths but their progression tracks are duplicated overt wo cards so there are really only six different ones. The differences are as simple as top pay and starting pay.

If you did some quick math you would realize that in a six player game 18 cards of each status symbol would be required. There are only 16 of each card type. The values of each card type are also variable with more of the lower valued cards than there are of the higher one. Because of this the other players will constantly be targeting your high value cards.

In order to enter the winning part of the game it is not as simple as having the correct 12 status cards. Oh no, you have to announce that you are going to "Go For It" immediately after the move token passes or lands on Labor Day. From that point, until the token PASSES Labor Day again, you have to insure that you have the twelve cards you need to succeed.

Durring this mad year you can bet that every other player is going to do their best to hold you back! Hold you back they will because if you don't win, all of the other players get to take a status card from you. Oh yes, that is a mighty sweet reward for preventing you from having it all!

As a two player game a lot of the tension is simply not there. Even with four players there are enough status cards to go around. With five players you start to see the tension and with six? Look out, because scarcity is going to be a big motivator!

The communal move token is a nice idea and it works well to keep everyone in a fairly even trajectory. It ensures everyone gets paid at the same time (salary will vary) so you don't have one player with a massive cash advantage based on a few lucky high rolls. In fact, while the game comes with two dice, only rolling one die can make the game a little bit longer while also insuring one lucky player doesn't get a huge cash lead due to a lucky ability to acquire status cards and promotions.

This is not a standard roll and move 80's game. It has a fair amount of tension and trade mechanics as well as a somewhat secretive selection of "screw your buddy" cards in the form of News cards.

This is definitely a game you can break out a couple times a year and it certainly beats playing Monopoly!

BoardGameGeek Entry: Go For It!