I've been working on painting the miniatures that came with the WarHammer 40K: The Battle For Macragge set. Today I'm going to show you how Lt. Varas came out.

The boxed game comes with a good assortment of miniatures.
You get 10 Termagants, 6 Genestealers, 8 Spore Mines, 10 Space Marines, an Imperial Pilot, and a set of crashed Imperial Aquila Shuttle terrain pieces.
I primed the Space Marines with a can of UltraMarines blue and the Tyranids were primed black.
I had painted up a combat squad of UltraMarines earlier this year and I must say that I should have primed them black and then coated them in blue after to allow for a deeper blue base coat.
I'm still working on painting up the shuttle pieces and the Space Marines but one of the figures is complete, Lt. Varas. 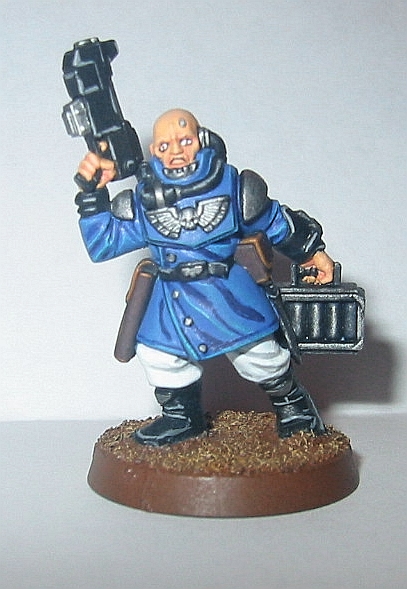 Lt. Varas was the first one out of the box that I painted. I primed him black to allow for deeper blues.
He has been painted in the colors of the UltraMarines which are blue and white.
To keep things simple, I used Ultramarines Blue as a base for his coat and white for his pants. Black is used on most of his leather items (boots and belts) though I did do his holster in a brown leather color scheme to add a little bit of variety to his color palette. 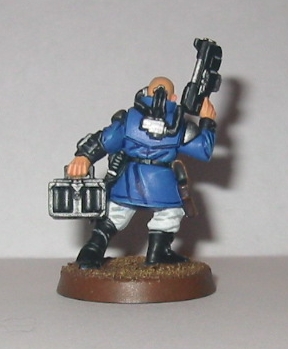 The base was coated with some light gravel to give it texture.
As you can see from the front, his metallic parts were first painted black and then dry-brushed with a metallic silver color.
In regards to his bolt pistol, I stuck with a mostly black coloring with gray highlights.
His skin tones were done with a simple coat of Flesh colored paint and then lined with a slightly darker color.
I know this piece is not going to win any awards but... It looks damn fine on the table and blows away most of the local competition I play against.