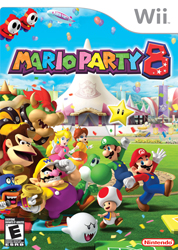 Are you ready to party?

Then get ready for May 29, 2007 because that is the day when the new Mario Party 8 is released for the Wii!

Developed by Hudson Soft this is the first game in the long running Mario Party series to hit the Wii. Unlike the last version, Mario Party 7, this game does not support eight players. The eight player system used in Mario Party 7 was a bit clunky in that players had to "share" a controller between them. It would be possible to do something on the Wii by having one player hold the Wii-remote while the other holds the nunchuk but, any game that required pointing would not work.

From all of the news I have been able to dig up about this new Mario Party game it appears that it only uses the Wii-remote. This means I can hold off on buying that fourth nunchuk for a little bit longer! 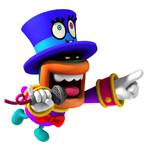 In Mario Party 8, a whimsical ringmaster has invited Marioâ„¢, Peach and the rest of the crew to his carnival, a perfect setting for the dynamic spectacle of the Wii game play. Mario Party 8 keeps the surprises coming with minigames that draw upon the Wii Remote's motion, pointing and button control in a variety of ways. Players always know how to jump into the action by watching an animated tutorial that shows how to use the Wii Remote (just like in Rayman: Raving Rabbids).

Following tradition, Mario Party 8 takes the social, strategic game play of board games and adds breaks for quick, action-oriented minigames. In the main mode, players travel across six boards in search of Stars, landing on spaces that are helpful (example: giving coins) or a hindrance (example: sending Bowser in to mess with the player). Several variations for these boards tweak the main goals to enhance game play for solo sessions, two-player games and three- to four-player games. 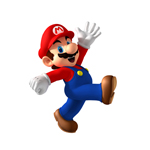 In addition, Mario Party 8 includes four more minigame-infused kinds of board games, such as Tic-Tac Drop, where players earn the right to put the next mark on the board by winning a minigame.

Mario Party games are a celebration of all things Mario, so you can play as 14 classic characters, the widest selection yet for the series, including newcomers Hammer Bro and Blooper. You'll also bump into many old friends and foes that span 20+ years of Mario games.

There are two major changes in Mario Party 8

I have already pre-ordered my copy of this game. I do not know if Nintendo is planning on giving out any bonus items to the pre-order folks but I don't care because I expect this game to sell out in the stores and become as hard to get as Wii Play was. 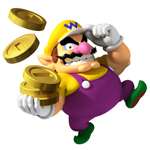 In case you are wondering, my favorite character to play as is Wario!

As an Italian myself (Northern Italy) I just can't get behind a wimpy little Mario guy with his wimpy little "winning" speech. Nope, I need that big Wario in my corner. Just so you know, I can't stand Waluigi.